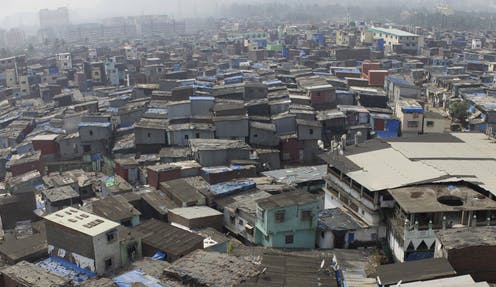 Informal settlements are experiencing a greater surge in COVID-19 cases than other urban neighbourhoods in Mumbai, India. Their high density, narrow streets, tight internal spaces, poor access to water and sanitation leave residents highly vulnerable to the spread of coronavirus.

One of Mumbai’s poorest and most underdeveloped neighbourhoods, Shivaji Nagar, is one of three informal settlements I have been studying. More than a month before the Indian government imposed a national lockdown, Shivaji Nagar residents, supported by the NGO Apnalaya, adopted their own measures to counter the pandemic.

Here, 600,000 people, 11.5% of Mumbai’s informal settlement population, are crowded into an area of 1.37 square kilometres next to Asia’s largest dumping ground. There is one toilet for every 145 people and 60% of residents have to buy water. There is a severe lack of health facilities.

As the virus started spreading rapidly, COVID-19 data for individual areas became hard to get. The release of cumulative data for the entire city was much less useful for understanding the growth in cases.

Once the first few COVID-19 cases were detected in Shivaji Nagar, the government shifted patients and their families to isolation facilities outside the settlement. Fever camps were set up in parts of the settlement to screen people with symptoms. While the lockdown allowed essential services to continue, vegetable markets were shut down as cases increased.

After facing a backlash for not considering the impacts on the poor, the government eventually announced a nationwide relief package. Residents could receive free food by producing their ration cards.

Some measures worked while others created new problems.

Quarantining people outside the settlement was effective (since home quarantine was not possible), as was setting up fever camps. However, the stigma and fear of being COVID-19-positive stopped many people from coming forward.

The sudden lockdown and market closures left most residents without food, water and medicines. Some 35% of Shivaji Nagar residents didn’t have the ration cards needed to get free food. Enforcing social distancing and stopping people from venturing out of their homes, by beating them, didn’t work either.

The lack of official figures on case numbers and testing rates made it hard to track the spread of the virus in Shivaji Nagar. Volunteers working for Apnalaya kept track on the ground.

As early as the second week of February, before India’s borders closed, Apnalaya had decided to drastically reduce contact between the residents and outsiders. The aim was to minimise residents’ risk of contracting the virus.

Apnalaya enrolled 40-50 volunteers from the neighbourhood to distribute relief supplies instead of bringing in staff. It arranged a year’s health insurance for all volunteers. Elderly and pregnant women were encouraged to stay home and contact the volunteers for help with their daily needs.
Even before the government announced its relief package, Apnalaya was providing food and essentials to residents. Distribution began within the containment zones, but later extended to the entire settlement.

Funds for these activities were raised in several ways: a crowdfunding campaign, an alliance between multiple organisations and collaboration with the government.

A dashboard was used to document, plan and monitor the distribution of relief supplies. As the government’s relief scheme excluded one in three residents, Apnalaya’s door-to-door relief delivery ensured no family was left behind.

Apnalaya’s permanent staff members were now managing everything from outside. The telephone became a medium to reach families who didn’t have a TV or a radio and to monitor the situation. Staff regularly phoned residents to give advice on hygiene and how to get essentials and contact doctors for other ailments.

Not everyone was in their database, but this didn’t matter. The residents played their part too.

As residents, the volunteers were committed to their community even when facing extreme hardships. Relief distribution was particularly tricky in areas where drains had overflowed on streets and foundations built on garbage had slipped. Yet these volunteers reached all residents, knowing they relied on their efforts.

The community even found a temporary way to deal with the water shortage. Parts of the settlement with piped water shared it with neighbours who previously had to buy water from private suppliers. One supplier, a resident of the settlement, now provided water free of charge.

But the NGO’s reach was limited, too, and the resident volunteers became the missing link. Acting as community leaders, they took stock of the situation on the ground and reported back to the NGO’s office.

Some of the strategies that have worked have been tailored to local conditions and adapted to the evolving crisis. But the shortage of health facilities and lack of data transparency pose a great challenge.

Can Shivaji Nagar withstand the storm?

Previous: How much more longer?
Next: India and Pakistan fought 3 wars over Kashmir – here’s why international law and US help can’t solve this territorial dispute