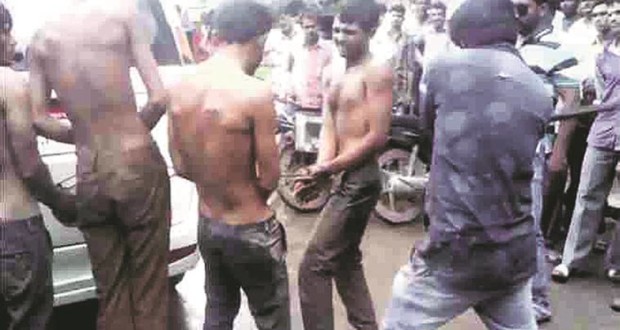 Unprecedented protests erupted across Gujarat on 18 July when 4 Dalit youths were beaten up | Pic Credits: sabrangindia.in under creative commons

In India, Dalits are killed over and over again. Every single day. Beaten, tortured, murdered, raped, stripped and paraded naked through the streets of their villages and towns, forced to drink urine, eat human excreta, humiliated in the most inhuman ways every single day in India. And with total impunity in most cases. These facts are not an exaggeration. They are statistics taken from police records and case files.

On 11 July, four Dalit men were stripping the carcass of a dead cow – a job considered their prerogative for millennia.

It has always been standard procedure for dominant caste farmers to summon Dalit men to dispose of dead bodies, both human and animal.

Dalits do the dirty work in cemeteries, morgues and cremation centres all over India. Dominant caste people in traditional villages, or indeed in most parts of India, would not dream of picking up a dead dog or cat. They consider this an act which would render them impure and defiled. So these men were just doing their normal duties. And for this, a Gujarati mob led by vigilante cow-protection activists decided to strip them naked, assault them with iron rods, tie their naked bodies to a jeep which then dragged the four to a nearby police station.

The irony, (not ironical at all for Dalits) is that they were mercilessly beaten for four hours just outside the police station. The cops, didn’t think it was necessary to intervene, or protect the victims. Very soon, a video of the vicious attack went viral on social media. Unprecedented protests erupted across Gujarat on 18 July. Protesters hurled rocks and stones, set alight public buses and in one district, seven Dalits including a well known politician, swallowed poison, in a highly publicised suicide attempt to highlight their cause. Several others followed suit.

This is the fist time that all dalits have joined together abandoning their party diktats. All politicians rush to the crime scene mouthing sympathetic platitudes though they do little for dalits when in power. But dalits have united in a previously unseen process to fight for justice.

It’s very rarely, even in a violent Indian protest, that a policeman is killed. But a policemen was killed by a rock which was thrown at him. Within India, as in the US, the oppressed seem to be saying ‘Enough!’. A Dalit leader says, ‘We will not take this lying down any more. We have had enough of being abused, raped and murdered. This must stop!’

This is also the first time that the politicians have sided with the Dalits of Gujarat, uniting across party lines, abandoning the politics of the Congress, BJP and other less prominent parties to fight together for their own, personal, common cause.

In a unique protest, they have hauled cow-carcasses in tractors and jeeps and dumped them in the centre of the road, in government offices and on official jeeps. They have promised to continue the protests till their demands are met.

It’s about time. Without unique and headline-grabbing action, the Dalit people, like Afro-American victims have never been taken seriously. I abhor the violence. I think to shoot down police is ghastly and cowardly. But having visited Dalit villages in every corner of my country, I can understand the fury and the anguish which has led to the protests.

Mahatma Gandhi, always the shrewd tactician and pragmatist, knew that the weak and powerless could never match the might of an oppressive police or army. He invented non-violent protest. But there is no charismatic leader to continue the non-violent battle. And so it goes on.