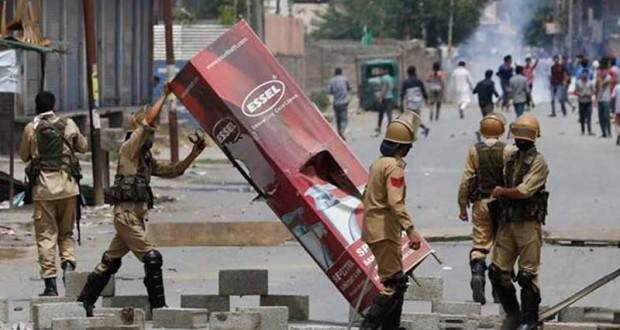 The unrest in Kashmir | Credits: noisebreak.com

Mob throws police jeep into river. One cop dead. My first reaction was, another US story about the eruption of violence post-the Black Lives Matter protests. But no. This was the morning’s headlines in a Bangalore newspaper and the cop killed by the mob was in Kashmir. Ironically, yesterday’s headlines were about an historic new Supreme Court ruling which ordered that the powers of the law enforcement agencies were to be curbed and that excessive violence had to stop.

How this will be enforced is an entirely different matter. The police and the armed forces all over the world have always enjoyed impunity. They have an arrogance born out of the fact that excessive brutality, mark the use of the word excessive, is okay. Apparently brutality, if it is not excessive is acceptable. Is it the norm perhaps? Who defines brutality? Who decides what is excessive? Or permissible?

Our own attitudes toward what is acceptable or permissible are coloured by centuries of brainwashing. So apart from die-hard human rights activists, we tend to shrug off the responsibility preferring not to judge the mostly men, or handful of women in uniform who profess their loyalty to flag and country and put their lives on the line when a war begins.

As a child, I remember waving at truckloads of jawans or soldiers, saluting them and thinking poor things, how brave of them to opt to die for us. My childhood took me through a war with China and three with Pakistan. It was very definitely a case of ours not to reason why. Our army was fighting for us. Women knitted woolen socks, gave their gold jewellery for the Indo-China war effort. Though I was a very young child I remember the fever of patriotism that engulfed the country, that engulfs every country when a war begins. I remember Brits waving flags during the Falklands war. Our side is always the right side. And God’s on our side, for sure.

I am still warm towards ordinary soldiers. I am sorry that they still believe it’s theirs not to reason why. But as I grew older, and more political, the childhood awe disappeared. I saw mostly men, from very poor families opting to ‘do or die’ because they have so little choice, so very few options in their lives, to feed their own families.

For us, the people who sit back complacently and prefer to look the other way, the question is, for how long will we allow atrocities and war crimes to go unpunished, even centuries after we acknowledged that war is never glorious or great. Fighting Hitler was inevitable. Perhaps destroying evil everywhere is necessary, at times. But when we discover that a war was entered into on completely fabricated evidence causing abominable levels of destruction and suffering, obliterating people, destroying not just the enemy but our own poor soldiers, physically and mentally, can we allow the war criminals – the leaders who took us into a totally unjust war – impunity?

We have conventions and treaties designed to circumvent war crimes, atrocities and torture. Codes of conduct are breached on the slightest pretext. We can never enforce civil behavior on rogue nations or dictators. But are ‘we’, the good and the great, then allowed to stoop to their level? Unless the prevailing atmosphere among the armed forces and police, is one of accountability and decency, unless we have common civility inculcated in these forces, we will continue to have situations where the army and police are hated and despised.

So the question is, who will train the law enforcement agencies? Who will enforce not merely the letter of the law, but the spirit? Otherwise, our (Indian) Supreme Court judgement, or the Chilcot report is irrelevant and meaningless. These are opportunities to take society forward incrementally. People are dispirited and have no faith in the law or government. Will they be proved right?

Previous: Britain votes to leave the EU, here’s what happens next
Next: Gujarati vigilante violence on Dalits sparks protest