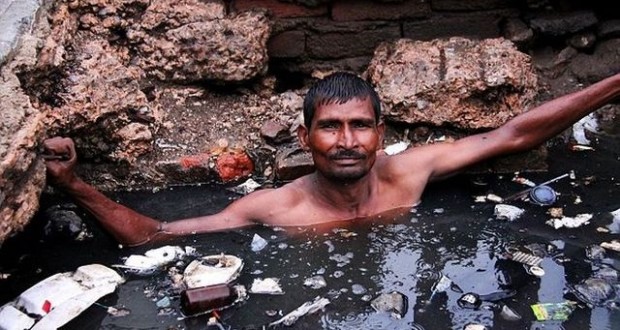 We pretend that people are not condemned to the caste system, Mari Marcel Thekaekara writes.

In 1996, I listened in disbelief as Martin Macwan, a dalit leader, told a Delhi gathering,

‘I am ashamed that as a dalit, working with my people for over 10 years, I did not know that balmiki people still carry shit on their heads everyday of their lives.’

It was on the eve of 50 years of independence from British colonialism. The Indian economy, we were told at that time, was poised to take off. Indians were ready to take over the internet world. Silicon Valley was ours for the asking. Yet we couldn’t deal with our own excrement with a modicum of decency. Women scooped it up, of different textures, from large open gutters, with a tin sheet, a stick broom and their bare hands. These were semi-urban toilets.

Putting on my journalistic hat, I went to Gujarat in early 1997 and visited public toilet after public toilet. I gagged often. I thought it was the worst thing I’d ever seen. And I have not led a sheltered life. Then I interviewed the family of a 19-year-old balmiki boy who while unblocking a manhole, was overcome by the toxic fumes, fell inside and died. He died for the paltry sum of about seven dollars. The boy died of drowning. Drowned in excrement. Till then I’d never given any thought to the common tiny news item ‘Man falls into manhole. Dies.’ I learnt later what this innocuously misleading little item truly meant. Imagine the indignity, the sheer horror, of drowning in shit. Imagine the nightmares his parents must have had. But perhaps they are inured to life and death as a balmiki conservancy worker.

In 1999 I wrote a book, Endless Filth’ about the horrible caste based liftetime occupation of the balmiki community, India’s ‘untouchables’ among ‘untouchables’. They are considered the lowest in India’s venal caste system and no one ever let them forget it.

That was in 1997. I have written endless newspaper articles about these people and the life they are condemned to lead by the caste system. Educated Indians ignore the unpleasant. We prefer to pretend it doesn’t exist.

Almost 20 years later, little has changed. My good friend Bejawada Wilson continues to fight for his balmiki community to end the obnoxious, disgusting practice of manual scavenging. This year 14 April will see huge hypocritical celebrations on the 125th birth anniversary of towering Indian leader Dr Bhimrao Ambedkar who fought ferociously for dalit rights. Politicians of every hue can be seen jumping on the bandwagon to claim his legacy as liberators of dalits. Few of them ever bother to enforce the formidable barrage of laws which if put into practice could end the horrific atrocities faced by dalits on a daily basis.

Every day, around three men die unblocking manholes in conservancy work. Ahmedabad NGO Kamdar Swasthya Suraksha Mandal believes that at a conservative estimate, there could be over 1,000 manhole worker deaths per year across India. The real figures are much higher as many deaths are covered up and go unreported even today.

India flaunts its global presence and boasts about India’s emerging image. Yet, we seek to hide the sordid reality of no toilets and the most neglected Indians dying everyday in a manner that must shame Indian society, any decent society. But we are a venal, thick skinned people. We don’t shame easily.

Bejawada Wilson and the Safai Karmachari Andolan have held a mammoth bus yatra (journey) covering every corner of the county. Their banner says ‘Stop Killing Us’. The memorandum was handed over to the president of India last week. Wilson says,

‘In India today, we talk about spending thousands of millions on a single bullet train, but haven’t yet found a way to automatize our sewer cleaning.

The enormous hype generated by the ‘Swacch (clean) Bharat (India)’ campaign literally sweeps into obscurity, the dirt of manual scavenging and balmiki mens’ deaths by drowning in shithole sewers, even now in 2016, though Gandhi raised the issue and made untouchability a global term in 1901.’

‘Stop killing us,’ pleads Wilson. Will the government of India listen?