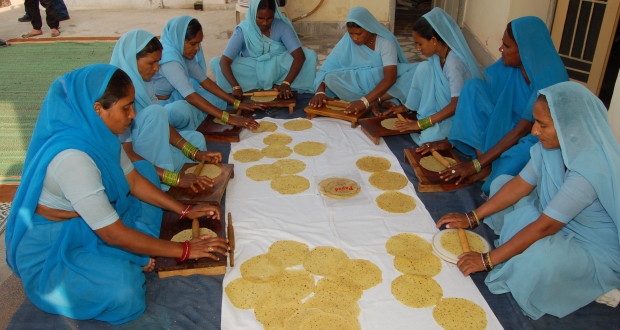 Building A Life Beyond Manual Scavenging

Alwar  – Sunita Nanda, 30, still remembers the day she was thrown out of the ‘jajman’s’ (patron) house. She recounts the painful encounter,

“As a newly married bride when I went to my in-law’s employer’s house and touched their feet, they took a huge offence. They abused my family and rebuked me for having the audacity to touch a person of higher caste.”

It is with such bitter memories and experiences of untouchability that Nanda, a former manual scavenger, lived for years in Alwar, a small town in Rajasthan.

That’s because using these positive legislations Sulabh International, a non-profit organisation, has not only spearheaded the large-scale construction of latrines and public conveniences in her town but has also provided skills-based training for hundreds of former women manual scavengers to enable them to take up alternate sources of livelihood.

In 2003, Sulabh came to Alwar and built toilets in homes that didn’t have one and needed to employ women like Sunita to pick the waste. Once liberated from the degrading profession, the women were registered at the Sulabh training centre, ‘Nai Disha’ (new direction) and were taught additional livelihood skills. Today, Sunita is a trained beautician and goes into the same homes she used to work at as a manual scavenger to deliver grooming services like a facial, manicure and pedicure. 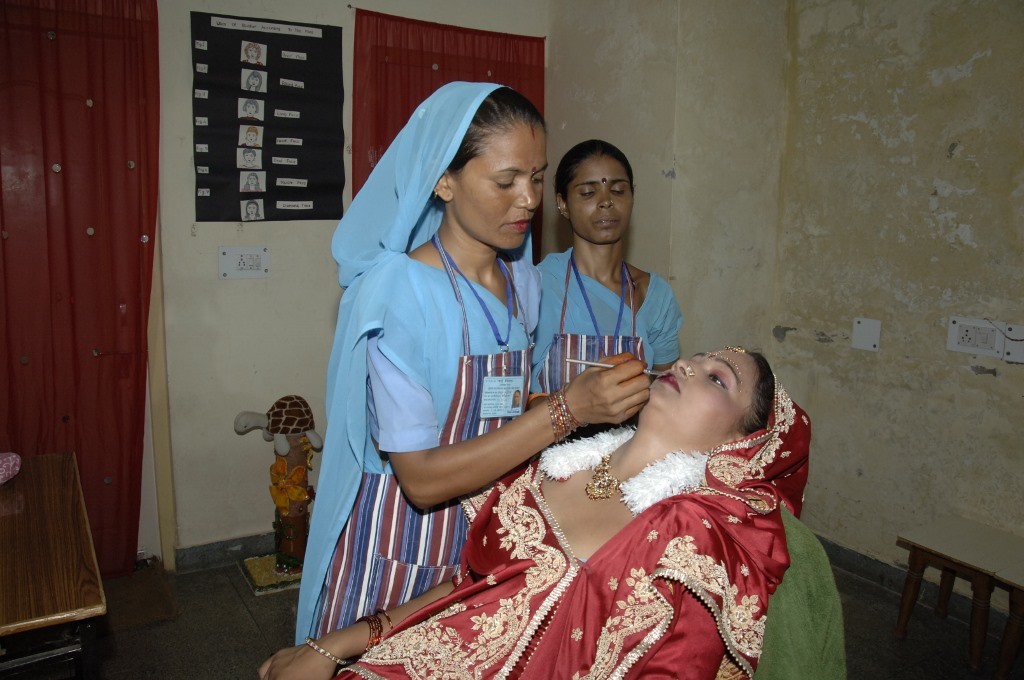 Skills-based training has enabled women manual scavengers to take up alternate sources of livelihood, like working as a beautician, and has helped them gain respect in society. (Credit: Elsa Mathews\WFS)

“There’s been a sea change in attitude. We have gained new respect. Families that used to treat us like untouchables now invite us to their homes for facials. My daughter feels proud to tell her friends that I am a beautician,”

she shares, with a wide smile.

Nai Disha was set up by Sulabh with the objective of training liberated women scavengers in various vocational skills like food processing, tailoring and beauty care apart from imparting them functional literacy.

Incidentally, the decision regarding the selection of courses is taken by the women themselves. At the same time, those enrolled here have the facility of getting free health check-ups done regularly.

Everyday, Lalita Nanda, 38, is thankful for her transformed fate.

“Earlier, when anyone wanted to give us some leftover food or water it was quite common for them to throw the food to us from a distance and pour the water from such a height that it would spill all over.

In fact, many times after work, we, too, would not feel like eating anything; the mere thought about our disgusting work was enough to make us lose our appetite,”

says the woman, who had been a manual scavenger since her childhood, having learnt the work from her mother.

“Those days, no one would come near us and for the longest time I wore used clothes of others,”

Of course, the cycle of discrimination did not end with them; their children have been at the receiving end of such cruelty.

“In school, my children were asked to sit separately during lunchtime and other children did not talk to them,”

she elaborates. At present, though, their mother’s new profession as a beautician has given them a renewed sense of self esteem.

Lalita says. At the Nai Disha centre, Lalita has picked up a new trade as well as learnt to read and write.

“Earlier, when my children fared badly in class I never bothered. Today, if they fail on a test, I feel pained because I know the value of education,” 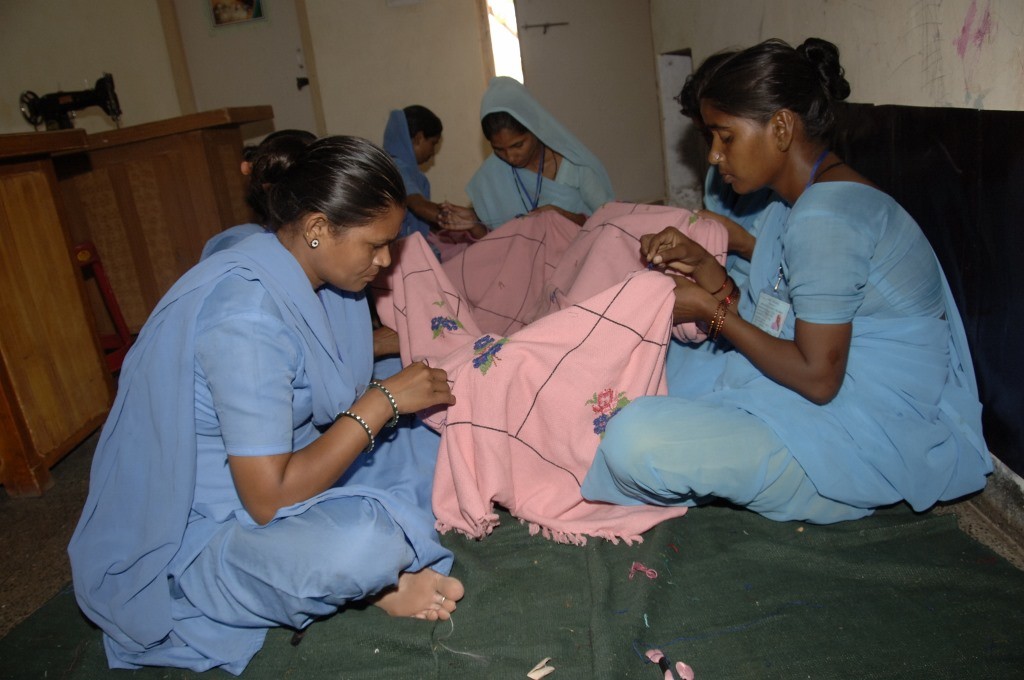 The degrading practice of manual scavenging, or the removal of human excreta by human hands from dry toilets, open defecation sites, gutters and drains, is a work hereditarily allocated to the sub caste of the Dalits (Valmiki). They are ostracised not just by other castes within their villages but by the Dalits as well and are often abused as “bhangi” (a derogatory word, literally meaning broken identity).

Though the practice of manual scavenging has been banned officially it does carry on in several parts of the country even today. A majority of the cleaning staff hired by the government of India also belong to the Valmiki caste.

In India, it is estimated that nearly 1.3 Dalits engage in manual scavenging of which 98 per cent are women, who are forced into this work due to social pressure.

Nonetheless, organisations like Sulabh are making a difference to their lives and social status in a significant way. Besides building toilets – 130 dry latrines have been converted to two-pit compost toilets in Alwar – it has set up three training centres across India where former women manual scavengers have a shot at reinventing themselves.

In Alwar and Tonk, 115 and 280 women, respectively, are receiving training currently. Once they are through most manage to bring home a modest income that varies from Rs 3,000 to Rs 12,000 month, which includes a monthly stipend of Rs 1,800 that Sulabh provides them as an incentive to prevent the women from going back to manual scavenging.

These days, most of the Sulabh trainees feel empowered and confident – they are experts at interacting with bank officials and signing on cheques in addition to marketing their skills and the products they make at the centre. With their new identity and profession have come opportunities to travel to conferences in the country and abroad to share their experiences and talk about their learning curve.

“There was a time we used to cover our faces and never talk in a loud voice. Now, everyone in our village asks us to tell them about our trip to the US,”

says Lalita, who has been to foreign shores.

Women associated with Sulabh’s programme have represented themselves at the United Nations, in New York (USA), Marseilles and Paris in France, Durban in Ireland, South Africa and London in the UK.

Those selected are given basic English-speaking skills before they go abroad, which is an unforgettable journey for them.

Indeed, such dramatic transformations have not been easy to achieve.

“It was an extremely difficult task to make the women focus, since they were used to waking up in the morning and leaving for work outside.

For the first few weeks we had to get them into the habit of sitting in one place. So we used to call them to the centre and make them watch television or enjoy their favourite movies so that they got used to being in one place,”

says Jyoti Chopra, who manages the Nai Disha centre in Alwar. But their efforts have borne rich dividend today as Alwar is not only home to 115 liberated women but is also a scavenging-free town.

Previous: Why Jats are on a warpath in Haryana?
Next: Union Budget 2016-17 Live