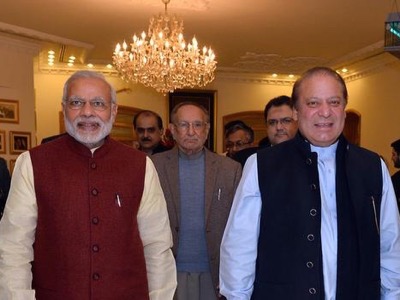 Since Modi took office in May 2014, India-Pakistan relations have experienced more ups and downs than a child’s yo-yo. The victory of a Hindu chauvinist hardliner – a man who had systematically blocked his predecessor’s peace-making efforts while in opposition and demonized Pakistan in his campaign speeches – was naturally assumed to portend a bilateral chill. Instead, Modi invited Pakistani Prime Minister Nawaz Sharif to his inauguration.

Less than two months later, however, the two countries were exchanging artillery fire across the border, with Modi instructing the Indian Army to respond disproportionately to Pakistani provocations. Talks between the two countries’ foreign secretaries were scheduled in New Delhi, only to be called off when the Pakistanis, like so many times before, met with Indian Kashmiri separatist leaders.

In November 2014, at the South Asian Association for Regional Cooperation summit in Kathmandu, a photograph was taken of Modi reading a brochure, ostentatiously ignoring Sharif as he walked past. (It was subsequently revealed, however, that the two leaders had met in the hotel suite of an Indian businessman who enjoys good relations with Sharif.)

Last February, Modi again initiated a thaw, calling Sharif to wish his country luck in the Cricket World Cup, and dispatching his foreign secretary to Islamabad. But mistrust again prevailed, and a cold peace ensued. An unexpected meeting of the two prime ministers in Ufa, Russia, in July produced little progress, with both sides immediately repudiating each other’s statements about what was discussed and agreed. Soon after, yet another scheduled meeting of national security advisers in Delhi was called off at the last minute, again following a meeting between Pakistani officials and Kashmiri separatists.

But, with a brief encounter between Sharif and Modi on the sidelines of the United Nations climate change conference in Paris on November 30, the tone changed yet again. Without any buildup or forewarning, the two countries’ national security advisers conferred in Bangkok in December. Just days later, India’s external affairs minister, in Islamabad for the fifth Heart of Asia ministerial conference on Afghanistan, met with top Pakistani officials, including both Sharif and his foreign affairs adviser, before announcing that the two countries had decided to restart a comprehensive dialogue.

It is against this background that Modi made his impromptu visit to Lahore (to attend celebrations of Sharif’s birthday and his granddaughter’s marriage), raising hopes among some that the bilateral relationship may be undergoing a genuine sea change. But within a week of the Christmas bonhomie, seven Indians were killed by militants at the Pathankot Air Force Base near the border with Pakistan.

Because such an attack was entirely predictable, it may not derail the diplomatic process completely. But, because lives were lost, it cannot be ignored, either.With two bilateral meetings – between the two countries’ foreign secretaries, and then between Modi and Sharif – scheduled to take place this month, we will not have to wait long to find out how much political damage the attack has caused.

But it should not be taken for granted that resuming a dialogue with Pakistan is appropriate, at least in the current context. After all, Pakistan has not really done anything to warrant the diplomatic reward of a visit from India’s prime minister. Indeed, it has failed to fulfill any of the minimum requirements for dialogue that Modi himself has cited.

It has not prosecuted the perpetrators of the 2008 Mumbai massacre, or constrained the terrorist forces that operate, with the complicity of the military establishment, on its territory. It has not even handed over Dawood Ibrahim, the fugitive don of the Mumbai underworld.

Against this background, Modi’s unplanned Christmas excursion – which caught his own aides by surprise – seems more impulsive than statesmanlike. Whereas such gestures are typically criticized as too little too late, this might be a case of too much too soon.

The question is why Modi did it. While he has so far refused to share his vision for the bilateral relationship, even with members of his Bharatiya Janata Party, there are some potential clues.

During his election campaign, Modi once said that Hindus and Muslims could either fight each other or fight poverty. Perhaps he believes that the same goes for India and Pakistan: They can focus either on their mutual enmity or on mutual development. The day before he visited Lahore, he told Afghanistan’s parliament that he hopes “Pakistan will become a bridge between South Asia and Afghanistan and beyond,” and discussed how the region’s countries “can all prosper together.”

If this is Modi’s vision, he should articulate it to the Indian public, along with a coherent peace policy that he will pursue consistently. But even then, there would be a serious potential hitch: Pakistan’s prime minister does not, ultimately, call the shots in his country. The military does. They are not impressed by theatrics like Modi’s Lahore visit, and they maintain their power precisely by sustaining a narrative that spurs hostility toward India. Pathankot could be a signal that they are not reconciled to peace, and a reminder that they have many more arrows in their quiver.

Indians cannot afford to forget that the last time Sharif hosted a celebrated feel-good visit by an Indian prime minister in Lahore, in 1999, his army subsequently started a war with India on the Kargil heights and unseated Sharif himself within months. As 2016 begins, votaries of peace can only hope that history will not repeat itself.

Previous: Public Safety Is Every Woman’s Human Right
Next: Why Delhi is the world’s most polluted city – and what can be done about it