Home > National Affairs > Why India and Pakistan met in Bangkok 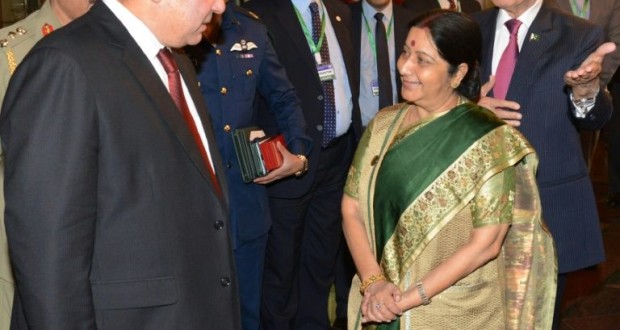 Why India and Pakistan met in Bangkok

A successful meeting in Bangkok between National Security Advisers of India and Pakistan has paved the way for Comprehensive Bilateral Dialogue between the two countries.

New Delhi: Happymon Jacob has done for years what National Security Adviser Ajit Kumar Doval, his counterpart in Pakistan Nasir Janjua and Indian and Pakistan Foreign Secretaries S Jaishankar and Aizaz Ahmad Chaudhary did in Bangkok on December 6 this year.

The Associate Professor of Disarmament Studies in School of International Studies in Jawaharlal Nehru University (JNU) has been visiting Bangkok for years to discuss the issues of bilateral interest for India and Pakistan. Jacob has been going there as a participant in Chaophraya Dialogue and Ottawa Dialogue.

The Chaophraya Dialogue, an Indo-Pak track II dialogue initiated by Melbourne-based Australia-India Institute and Islamabad-based Jinnah Institute after the Mumbai attack in 2008, has had 17 meetings till now.

Similarly, the Ottawa Dialogue, a project aimed at improving relations between India and Pakistan has been deliberating on military-to-military and nuclear CBMs (Confidence Building Measures), intelligence and India-Pakistan-Afghanistan for four years.

Jacob says it was a brilliant move on the part of the Indian and Pakistani governments to initiate discussion on bilateral issues in Bangkok.  He says not only the talks which extended to four hours in the Thai national capital succeeded in circumventing red lines drawn by the Narendra Modi and Nawaz Sharief regimes but also avoided media glare which has always shadowed the Indo-Pak negotiations.

Moreover, secrecy surrounding the Bangkok dialogue ensured that there was no pressure of expectations on Indian and Pakistani interlocutors when they sat across the table and they did not get into any commitment traps before the talks.

The neutral venue of the talks made sure that Pakistani negotiators did not insist on meeting leaders of Hurriyat Conference from Kashmir before or after the talks.

There was no overemphasis before the Bangkok dialogue on Jammu & Kashmir (K-word), something Modi government has displayed an aversion to since it assumed power in New Delhi in May 2014. The two sides quietly discussed terrorism and other security related issues.

Unlike his predecessors in office who did not mind a ‘piecemeal’ (discussing individual issues) approach, the current Indian Prime Minister has shown a marked preference for holding an uninterrupted dialogue with Islamabad on the entire gamut of issues which will impact not only relations between the two nuclear-powered nations but also the Indian sub-continent and beyond.

For instance, New Delhi wishes to move forward on bilateral trade which has remained much below its potential.

The two countries, according to Indian High Commission in Islamabad, did business worth $ 2.35 billion in the financial year ended on March 31. The World Bank hopes that easing travel restrictions and reduction in tariffs could increase the bilateral trade between New Delhi and Islamabad to $ 12 billion (over five times more than the current). India also seeks transit arrangements with Pakistan for on-road trade with Afghanistan via Wagah border near Amritsar.

India extended Most Favoured Nation (MFN) status to Pakistan in 1996 but the latter has hedged on reciprocation despite having made right noises about it every now and then.

What exemplifies India’s keenness for comprehensive dialogue with Pakistan is the fact that Indian Vice President Hamid Ansari will soon be travelling to Turkmenistan for the launch of construction of TAPI (Turkmenistan-Afghanistan-Pakistan-India) pipeline for natural gas.

Modi’s preference for Comprehensive Bilateral Dialogue got a confirmation when India and Pakistan released a joint statement after Sushma Swaraj’s meeting with Sartaj Aziz, Adviser on Foreign Affairs to the Pakistani Prime Minister.

Both sides directed their Foreign Secretaries to work out the modalities and schedule of the meetings under the Dialogue including Peace and Security, CBMs, Jammu & Kashmir, Siachen, Sir Creek, Wullar Barrage/Tulbul Navigation Project, Economic and Commercial Cooperation, Counter-Terrorism, Narcotics Control, Humanitarian Issues, People to People exchanges and religious tourism.

The largest contribution from the Bangkok meet is that it has helped India and Pakistan avoid media spotlight. It is no gainsaying that with its constant coverage of Indo-Pak meetings, the media not only increases pressure on the interlocutors but also puts unnecessarily focus on tangible gains from such meetings.

In effect, the media forces the negotiators to harden positions even before the talks have begun. Brigadier (retired) Arun Sahgal who has attended military-to-military CBMs of the Ottawa Dialogue for over two and half years in Bangkok, feels that the talks at a neutral venue like the Thailand capital provides ‘a degree of quietness’ to the Indo-Pak dialogue.

The biggest example of why and how a neutral venue of negotiations could be of an advantage to New Delhi and Islamabad is the ongoing track-II diplomacy between the two countries. Apart from Chaophraya and Ottawa Dialogues, there are number of other track II initiatives which happen at regular intervals at Istanbul, Copenhagen, Dubai, Kuala Lumpur and other neutral venues.

For instance, when Indian and Pakistan soldiers were involved in heavy shelling on each other across the international border and the LoC in October last year, a number of prominent former diplomats, military officials and ambassadors of the two countries were breaking bread in Dubai. Convened by former Major General (retired) Ashok K Mehta, the Indian and Pakistani delegates met under the aegis of Dubai track-II. The group has held dialogue every year since its inception in 2003.

Apart from circumventing red lines, media focus and pressure on interlocutors, the biggest advantage of holding dialogue in a neutral venue is that it is easier for the participants to get visa in a third country. India and Pakistan have their sensitivities in dealing with the issue.

Members of Jinnah Institute of Karachi were pleasantly surprised last month when New Delhi granted them visa to hold a two-day long track II conference in India’s national capital in collaboration with Centre for Democracy and Reconciliation (CDR).

“It is difficult to get a visa (for track II in Delhi and Islamabad). Plus, there is lot of media attention which can create problems,”

says Jacob attributing to track II the declaration of simultaneous coordinated patrolling along the IB in Rajasthan and Gujarat by Director Generals (DGs) of Border Security Force and Pakistan Rangers earlier this year.

Bangkok has proved to be a very effective ice-breaker between the two nuclear powers whose relations have shown a consistent deterioration since August this year when the two countries could not agree on the agenda for a scheduled meeting in New Delhi between their National Security Advisers.

Swaraj and Aziz condemned terrorism after their meeting in Islamabad on December 9 and noted the successful talks on terrorism and security related issues in Bangkok by their NSAs.

Both India and Pakistan were under tremendous pressure from United States of America and other world powers to resume talks. Pakistan faced criticism for not acting against terrorist groups operating out of its soil while India failed to bring about a significant improvement in the situation in Jammu & Kashmir. Bangkok, in a way, provided them a way out of a pressure-cooker situation.

Notwithstanding all its public posturing, even China would not want India to oppose its 2000-mile-long China-Pakistan Economic Corridor (CPEC) which aims at connecting China and Pakistan through railways, roads, pipelines and other development projects.

The corridor will pass through Gilgit-Baltistan in Pakistan-Occupied-Kashmir (PoK), Xinjiang in China and Baluchistan in Pakistan, three extremely volatile regions where the potential for fomenting unrest is tremendous.

Previous: The Chennai Warning
Next: Commemorating the War of 1971: Vijay Diwas