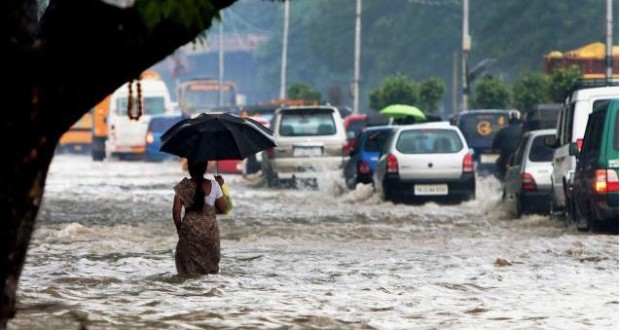 Though monsoon floods are common in Chennai, this year the rains have had an 'unknown fury' | Photo credit : Chennai Speakers

Paris is in focus again as the climate change talks take centre stage. All over the world, people are watching and waiting, pinning their hopes on these talks, praying desperately that something useful, something good will come out of it all, despite the cynics. At a local level, where I live in India, the subject of climate change is finally permeating people’s consciousness because it’s hitting everyone where it hurts – personally.

Our state, Tamil Nadu, has been reeling from rains that have hit us with a hitherto unknown fury. Although for me personally it has meant a few weeks of incessant rain, no telephones, erratic electricity and intermittent internet, our state capital Chennai has been flooded for weeks. City dwellers, generally used to searing heat, have been lashed by rain, flooded out of their homes, had their cars and houses submerged. Most Chennai people cannot believe this is happening to them – to us.

The rain finally abated, to everyone’s relief. But not for long, said the weather prophets. It will be back. And back it was with a vengeance today. Many parts of Chennai are once more facing floods, no electricity and total chaos. TV channels report that the rain-related death toll has exceeded 188 people. So it has reached tragic proportions, even as I write.

The unpredictable weather, making farmers’ lives shambolic and catastrophic as crops are destroyed by too much unseasonal rain or, in other instances, too little rain and too much drought, has taken the climate change warnings into people’s lives as no amount of publicity could have done.

Slowly but surely, people are talking about the good old days, stories about village life recounted by grandparents or great-grandparents. The healthier, tastier food. A time when you could pick fruit off a tree and eat it without worrying about deadly pesticides. There’s a growing movement of organic farmers. Many unlikely city types are opting to take their kids to a healthier environment, frequenting organic food shops, growing vegetables themselves, running away from pollution.

Delhi-dwellers know their air is poisoned. Everyone is desperate for the government to do something about it. It’s not ‘green crazies’ spouting doomsday messages any more. Everyone can see it happening, when their children can’t breathe and folks are hospitalized with life-threatening pollution-related disorders.

Yet governments continue to talk about ‘development’. Even ‘polluting development’, a contradiction in terms, is a priority as they try frantically to fast-track decisions that corporates demand, at the expense of the environment.

Every farmer knows about climate change without needing to read environmentalists’ analysis. It affects their lives. Farmers grow food based on generational wisdom and expertise arrived at because of passed-on knowledge, tradition and custom.

All of this, the knowledge of the seasons, the weather, the time for sowing and the time for reaping, is now almost thrown out of the window by climate change. There is no longer any stability. No normal. Nothing to base sowing and planting decisions on. Global agriculture is under threat. Lack of food security and hunger are very real dangers now.

It is in everyone’s interest to work to save the planet. Let’s hope those who walk the corridors of power in Paris right now, the world leaders who can make a difference, decide to put aside petty politics and power games, corruption and corporate interests, and seriously work for global solutions to combat climate change. For all our sakes, may the force be with them.

Previous: Is it the end of AIDS in 2030?
Next: Why Kejriwal is no longer an odd number in politics