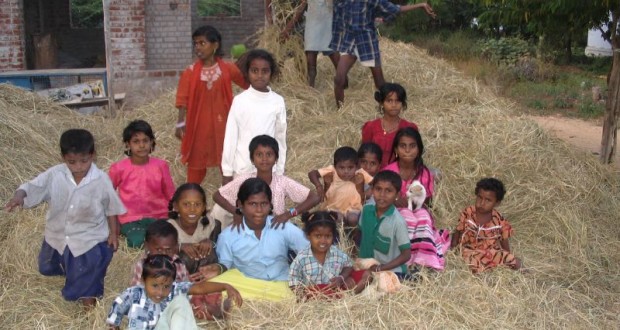 A Dalit Village in Madurai | Credits: The PhilosophyofPhotography via Wikimedia Commons

It’s been a nasty, brutish week. On the heels of 2 little girls being raped, India awoke to another horror story: just outside Delhi, 2 Dalit children, aged 9 months and 2.5 years, were cold-bloodedly burnt to death in a ghastly tale of revenge and caste hatred.

To settle scores from an older feud, some men from a dominant caste crept up to the house of a sleeping Dalit family and poured petrol from an open window onto their bed. They set it alight and bolted the family in from outside. The children died before they arrived at a Delhi hospital. Their mother, Rekha, suffered serious burns and is battling for her life. Their father, Jitender, also received burn injuries while trying to save his family.

Yet their deaths have not stopped traffic in Delhi, nor seriously hit Indian TV channels. These are routine deaths. Dalit deaths. Expendable people. Caste tension is the reason attributed to their murders. Flip the page. It’s not really newsworthy. Just some dead Dalits. Been going on for thousands of years. No-one is shocked. No-one gives it a second thought.

When will Dalit deaths cease to be ignored in our country? How can we even pretend to aspire to a global ranking in the ‘developed’ world when we allow our most vulnerable people to be raped, tortured, beaten and murdered every single day, with total impunity? We continue to be a wretched, shameful country, even though we prattle on about our great and glorious heritage.

Unless casteism is eliminated from our villages, we will always remain a backward, primitive, despicable society. We rape Dalit women to teach their menfolk a lesson and keep them in their place. We kill Dalit men because they are getting too big for their boots. We prevent Dalits from studying or following their aspirations because they must stay in our villages to work, exploited and underpaid so we can prosper.

I have visited Dalit villages in every corner of my country. I have witnessed their pain at close quarters. I’ve heard Dalits scream, ‘Enough. When will it end?’

We have to acknowledge the evil in our past and atone for it. We cannot provide justice to the billions who died aeons ago, but we have to punish the guilty today. The rapists and murderers of Dalit women, men and children have been given impunity for centuries. They deem it their birthright.

Our Constitution, brilliantly framed by a Dalit, is moving in its rhetoric and passion about justice for all. Yet caste is the antithesis of all democratic values and belief, by its very nature. It proclaims that some people are born to be slaves to others. For millennia, dominant castes considered it their prerogative to persecute and enslave those decreed their inferiors. An enormous percentage of our population still believes this is their birthright. And they will kill to enforce these beliefs to show their power over what they believe are ‘lesser’ humans.

Although we have powerful laws to enforce justice for the vulnerable, they are rarely used. Unless this changes, our society will continue to remain feudal, nasty and brutish. We can preen ourselves on the wonders of ancient India. But any thinking Indian knows that, in reality, with things the way are at present we can only hang our heads in shame.

Previous: The Force Is Certainly Not For Women
Next: Why women home-based workers are bargaining for better rights and protection