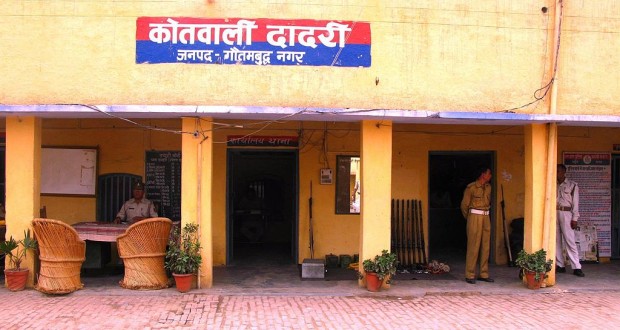 “Don’t soldiers die every day on the border or in Jammu & Kashmir? Does anybody talk about their deaths? Why then make a mountain out of Akhlaq’s death?”

asks Rajiv Kasana, a youth in Shahpur, a Gurjar village neighbouring Bishara, angrily accusing the media and Samajwadi Party of building tension in the region.

Mohammad Akhlaq (50) was beaten to death in Bishara Village, located near Dadri Sub-Division of Gautam Buddh Nagar District less than an hour’s drive from New Delhi, on September 28, three days after Bakr Eid, by a mob of local youth who accused him and his son Danish (22) of having killed a community calf.  Danish, also thrashed with sticks, clubs and bricks etcetera, has been battling death in Kailash Hospital in Noida since then.

The anger of Kasana, four of his colleagues and several others in Bishara is, in particular, directed at the SP Government and minister Azam Khan.

The thrust of their argument is that Akhilesh Yadav’s Government has once again exhibited its bias towards the minority community in the episode. Their demand (howsoever weird it may sound) is that all eight boys picked up for Akhlaq’s murder should be released forthwith.

“The party was biased even in Muzaffarnagar and every other part of Western Uttar Pradesh where there has been communal violence in the recent past.

a youth playing cards on a rope cot next to Kasana’s outside Shahpur village questions.

In Kakrait, a part of Bishara Village across a canal, two Sisodia elders tell a youth to show me the alleged images of a butchered community calf which, according to them, was abducted and killed by Akhlaq’s family. The images have been circulated all around and would definitely have played a part in provoking the attack on Akhlaq and his son Danish.

Surprisingly, a majority of the villagers in Gautam Buddh Nagar District till some months back supported the Samajwadi Party. In fact, during the general elections in May last year, party candidate Narendra Bhati banked, to a great extent, on rural vote bank to make a match of his electoral fight with BJP nominee Mahesh Sharma.

Gurjars, in particular, were considered vocal backers of the party at the time of parliamentary elections.  Gurjar leaders like Narendra Bhati have for long flaunted their proximity to Mulayam Singh Yadav as a shield for their alleged illegal activities. Remember, how Bhati got Gautam Buddh Nagar District Magistrate Durga Shakti Nagpal transferred last year after the latter ordered a crackdown on mining activities in Yamuna and Hindon Rivers in the district.

It is obvious that the villagers in and around Bishara expected in Akhlaq’s case a repeat of what Mulayam had done in the case of Bhati and said (“boys are boys. They make mistakes“) on increasing rapes in the state. They wanted the Samajwadi Party to be soft towards accused in Bishara incident as well. Their anger towards the ruling party has been borne largely out of their disappointment.

Rightly or wrongly, for them Bishara incident has reinforced the perception that Azam Khan always has his way with Akhilesh when it comes to announcement of measures for welfare of the minority community and action against the majority community.

Since the villagers believe media has ignored their narrative and not conveyed their anger to people at large and Akhilesh Government it has also become their target with group of women driving cameramen and reporters out of a gateway which leads to the village.

It is true that the media including television news channels played the story without the version of the accused in the first three days. But it could not have done it otherwise.

Majority of men from Sisodia families in the village were on the run and not available to give their version.

The villagers in Bishara and surrounding villages believe that the media particularly English newspapers and channels is soft towards fundamentalism of the minority community (remember, how it ignored Kerala incident where hands of a professor were chopped off for allegedly insulting a religious icon or study the pattern how it reveals and hides names of victims and perpetrators of communal violence or how it has been treating fundamentalism of Kashmiri politicians).

They are also no less angry with Congress Vice President Rahul Gandhi who visited the village on October 3. Gandhi met Akhlaq’s family but refused to hear families of the murder accused.

In fact, the only political party, the Thakurs of Bishara and neighbouring villages approve of is Bharatiya Janata Party and fringe Hindu groups like Hindu Rakshak Dal which have visited the place.  The reasons are apparent.

The party, particularly its local leadership from Uttar Pradesh, not only has refused to condemn the incident unequivocally but at times looks to have endorsed violence against what it calls ‘cow eaters’ or looked for alibis.

When BJP MLA Sangeet Som says he will work for release of the accused Hindu boys on bail and revocation of National Security Act (NSA) under which they have been booked his attempt is to play to the galleries, consolidate majority vote and at the same time to be one up on Azam Khan who allegedly got accused Muslim men released in Muzaffarnagar.

There is a clear attempt to downplay the incident when Tourism Minister and Gautam Buddh Nagar MP Mahesh Sharma attributes the incident to a ‘misunderstanding’.

But to call the incident a ‘pre-planned murder’ (AIMIM leader Asaduddin Owaisi called it that) does not also gel with the police version and situation on the ground. Talk to any policeman in Gautam Buddh Nagar District and what comes out is that, the incident was caused by a sudden provocation and flaring of tempers.

The way the SP Government has dealt with the murder and compensation raises more questions than it answers.

It is clear that Akhilesh Yadav wanted to keep the pot boiling for the first few days because the BJP was getting a bad nose from the incident. His party did not mind consolidation of votes of the minority community in its favour.

The party has only woken up after people have started questioning its failure in protecting a villager and the BJP has tried to whip up majority consolidation by accusing the ruling party of ‘helping those who slaughtered a cow’.

Previous: Women journalists and the never-ending harassment
Next: I paid a bribe: how some citizens are fighting corruption from the bottom up