Home > Writathon > Being Male > Men For Women At The Panchayat 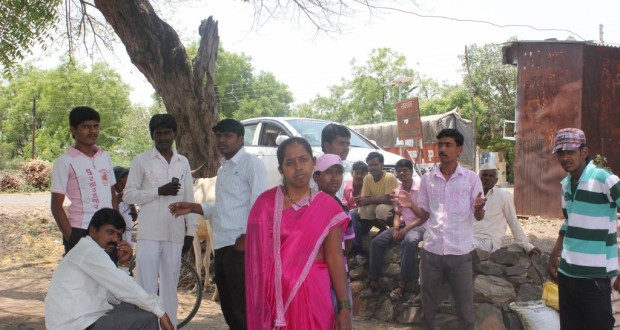 Suvarna Nanasaheb Bhandge's (centre) husband gave her the confidence to step out and attend gram sabha meetings, which paved the way for her to become the Sarpanch of Hatid village in 2012. (Credit: Suchismita Pai\WFS)

Solapur (WFS) – It was extreme anxiety that drove Sampata Shivaji Babar and Kalavati Sambhaji Babar to Baburao Sadashiv Bhajnavle. In Manegaon village of Maharashtra’s Solapur district, women were not just expected to keep quiet, they were also expected to be invisible. On the domestic front they had to take on the responsibility of running the household without any complaints and in the village they had to move around barefoot with their face hidden behind their sari. Clearly, discussing personal matters with anyone outside the family would have simply been out of the question but desperate times call for desperate measures.

With failing agriculture and food running low it all came down to their local elected body to ensure that each family got its share of subsidised government ration but no one seemed to care. Sampata and Kalavati had heard of the Food Security Act, which takes note of a woman’s role in the family and directs that the eldest female, over 18 years, be treated as the head of the household for the issuance of the ration card. The duo wanted to raise this very issue in the gram sabha and find out what their gram panchayat could do to alleviate their situation. Risking social shame the two decided to speak to Baburao and figure out a way to raise the issue of their entitlements under the Food Security Act before the panchayat.

Well, ever since the Samajhdar-Jodidar (Responsible Partner) intervention, aimed at motivating men to support women at home and in the panchayat, got under way in Manegaon this father of two has emerged as a vociferous advocate of equal rights for girls and women.

The initiative, which began in 2010, is the brainchild of the Centre for Health and Social Justice (CHSJ) and has been implemented across 100 villages of Maharashtra through five non-government organisations. Select men, chosen from within the community, are trained as animators, who, in turn, influence their peers to close the gender gap.

“Prior to being sensitised towards women’s issues I, too, had been quite indifferent to the hardships that mar their everyday existence. Had Sampata and Kalavati ‘dared’ to come to me earlier I would have totally dismissed them. Today, I realise what it must have taken for them to talk openly about starvation,”

remarks Baburao. Thanks to the insightful training sessions conducted by Shahaji Gadhire of Astitva Trust, the NGO implementing Samajhdar Jodidaar (SJ) programme in the area, very slowly “my outlook was transformed for the better”.

Not only did Baburao encourage Sampata and Kalavati to take up the matter of availability of food grains seriously, he also decided to assist them in doing groundwork needed to hold the first-ever Mahila Gram Sabha in their village. Fearing backlash from a community steeped in patriarchy, the women hesitantly went ahead as they had Baburao’s staunch backing. To their “utter surprise” the Mahila Gram Sabha was a resounding success. As many more women decided to share their food security woes the panchayat was compelled to properly enforce the Food Security Act, which solved their problem.

Of course, it just so happened that the women of Manegaon only needed that little bit of push to claim their rightful political space.

Greater numbers have naturally allowed them to aggressively pursue matters connected with the progress of their village. Says Baburao, who, incidentally, was the first man in Manegaon to give his wife joint property rights,

“The issues that women bring to the panchayat are quite fundamental, like building toilets and ensuring that water is available closer to home so that they do not have to spend a majority of their day fetching it. Nonetheless, these are beneficial for the whole community.” 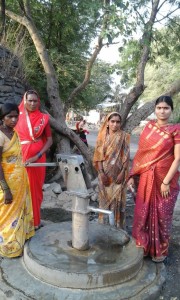 Under Sarpanch Ambika Umakant Gadve’s (right) able leadership, Boregaon is on track to becoming a ‘Nirmal Gram’ and the community has even got together to spruce up the local government school and its grounds in order to improve the schooling experience for their children. (Credit: Suchismita PaiWFS)

It is a globally acknowledged fact that having more women in local governance improves the overall quality of life. The SJ programme, which is attempting to change the patriarchal mindset of men in the countryside, has restored the balance of power to a large extent and enabled women to have a say in their collective destiny.

Be it in Manegaon, Boregaon, Hatid or Karandewadi, among scores of other small hamlets, womenfolk no longer hesitate in demanding explanations regarding their rights and entitlements related to water and sanitation, education, health and livelihood.

According to Gadhire, who has been engaging with the men here for the last few years,

“Not just married women, our efforts have given single women, who are otherwise invisible in society, the agency to assert themselves.”

He cites a recent incident when a group of single women, who were solely dependent on a few goats for their livelihood, raised the issue of subsidy during the prevalent drought conditions.

Ordinarily, power structures are such that it’s the larger farmers, who are more likely to get access to the subsidy and fodder for their farm animals. And while previously the women farmers would have remained silent watching their existence fall apart, now they are breaking the silence and so there is hope for change in the near future.

Apart from a louder voice, women have found a bigger foothold in day-to-day governance, as men get comfortable with the idea of sharing power.

If in Hatid village Suvarna Nanasaheb Bhandge’s husband gave her the confidence to step out and attend gram sabha meetings, which paved the way for her to become the Sarpanch in 2012, then in Boregaon village, Ambika Umakant Gadve, 25, was able to fight a bitter political battle to emerge as the head of the panchayat because she had the undivided support of her better half, Umakant, and another bright SJ community influencer, Manikchand Dhanasetty.

In fact, under Gadve’s able leadership Boregaon is on track to becoming a ‘Nirmal Gram’ and the community has even got together to spruce up the local government school and its grounds in order to improve the schooling experience for their children. What’s more, the Sarpanch’s personal interest in furthering the cause of girls’ education has resulted in girls outnumbering boys at school.

That elected women can make a huge difference has come as a big surprise to Parvati Bansole, 66, a panchayat member serving with Gadve.

“Being uneducated, I was unaware of the rights and duties vested in the hands of a people’s representative. Observing Gadve has made me realise that there is tremendous potential to do good.

This is my second stint in the panchayat and I am determined to do something worthwhile for the coming generations.”

The mood is indeed upbeat in Karandewadi as well. Raosaheb Namdeo Aldar had always been under the impression that women can never be effective leaders. After all, despite the 50 per cent reservation it was always the men who decided on a ‘suitable’ candidate and a woman would be no more than a rubber stamp.

As for women attending the gram sabha it was unheard of. However, when Raosaheb was roped into the SJ programme he began to see the injustice women bear for no real reason and he decided to root for change.

“Though the process has taken a couple of years the decision to assist women to make their mark in the panchayat has been right. Before they drew our attention to it, no one had thought of the benefits of building public toilets and having well-lit public areas. The move to electrify our village has been led by women.”

“we now have over 250 women, mostly widowed or single, working in shops and at the health centre so that they have a stable source of income”.

Sarla tai (name changed), a single woman, who had been fighting all her battles herself till recently, sums up the positive transformation she sees around her,

“We have found strength in unity and this has made a world of difference to every aspect of life – be it the availability to food, access to healthcare or safety in homes and public spaces.”

And this would not have been possible without the support of a few good men like Baburao or Raosaheb and others.

Previous: The Kickback Kid
Next: India’s tea capital can recover from devastating floods – if the government gets its act together