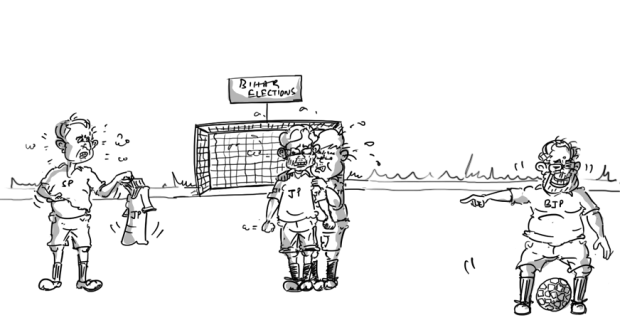 It was sometime in February 1998. A pale orange sun was going down behind the white clouds opposite Barauni Oil Refinery.  Our ambassador car driver had just returned after unsuccessfully scouting for a mechanic in nearby cities to fix the vehicle’s broken axle. We, four journalists, were haggling with the driver on the roadside for the return of a part of the hefty advance we had paid him in Patna when we hired him for the journey to Madhepura.

Suddenly, a motorbike, driven by a rough-looking youth who had a thin coarse red cotton towel worn around his neck, screeched to a halt.

“I am nephew (bhanja) of Bachcha Yadav. Everybody knows him in this part of Bihar. Let me hear your problem”,

he declared perching his feet on the ground to balance his two-wheeler.

We introduced ourselves. I represented a tabloid from Mumbai (then Bombay) and the three others reported to Tarun Bharat, Kesari and Sakaal, the largest circulated Marathi paper. Coincidently, the first name of all three was Abhay. Two of them operated from Pune and one was based in Nagpur.

“Since I passed out from Mayo College, Pune it’s my duty to help you out”,

I had no idea that there was no Mayo College in Pune. And the Abhays were probably too overwhelmed to object. Our uninvited saviour immediately turned to our driver.

“Kitna paisa liya hai re haramkhor (How much money have you taken, lazy fellow? Take it out”,

he barked, spitting betel juice on the ground.

When the driver pointed out that advance could not be returned there was a sound of ‘thapak’ with the biker slapping him hard across the right cheek, followed by a barrage of expletives.

he questioned and rained more blows. The driver pleaded that he had bought fuel for the money. The biker was unrelenting and ordered a strip search. The driver took off his shirt. But it contained only fuel bills. The driver’s hesitance to take off trousers provoked more beating. The back-pocket of the trouser produced a few crumpled notes of hundred rupees. The money was handed over to one of the Abhays.  The latter still wanted to share part of it with the driver.

“How will he get his car repaired and return to the city?”

he requested. The biker shut him up with ‘you don’t know anything about Bihar’. The biker waved a truck and told him to drop us off to Begusarai. Abhay, who was handed over the money, was so shaken by driver’s thrashing that he decided to return to Patna and subsequently to Pune abruptly ending his tour for election coverage.

The incident involving the taxi driver was not considered rare and was only symptomatic of the crimes which were happening in Bihar then.

In fact, more heinous crimes like murder, dacoity, kidnapping for ransom, rape and road robbery were the order of the day.

During my trip to Barh (Nitish’s home town) and Bakhtiarpur, I heard from shopkeepers how they paid rangdari (protection money) to criminals to save their business. I would often hear from my Bihari friends that it was not advisable to buy a new car in Patna as that could invite kidnappers at your door.

Lalu Prasad Yadav’s entire rule from 1990 to 2005 (from 1990 to 1997 directly and 1997 to 2005 by proxy through his wife Rabri Devi barring two very brief spells of president’s rule) is known for lawlessness which prevailed in Bihar. No wonder, Bharatiya Janata Party-led coalition in the state loves to remind voters about the possibility of return of jungle raj in case Rashtriya Janata Dal-Janata Dal (United)-Congress forms government in Patna after the elections next month.

Lalu Yadav’s track record on law and order during 15 years of RJD’s rule is what makes the mandal messiah a liability for Janata Dal (United) leader and combine’s chief ministerial candidate Nitish Kumar.

Nitish would be in no position to defend Mohammed Shahabuddin, the former RJD MP from Siwan, the mafia-turned-politician who flourished during Lalu’s rule. Nor can he promise that the likes of Sadhu Yadav and Subhash Yadav, Lalu’s brothers-in-law, will be kept in check in case the JD(U)-RJD-Congress conglomeration wins Bihar.

During my tour through Patna, Hajipur, Barh, Muzaffarpur, Khagaria, Saharasa, Madhepura and Samastipur, I hardly came across a road which could be termed motorable. Even in Patna, the state capital, the roads left much to be desired. Apparently, Lalu laid no emphasis on road building during his one-and-a-half-decade long tenure.

I also came across teachers of a Charwaha Vadalaya (schools for cattle grazers) near Barauni who complained that they had not been paid for several years. The Charwaha Vidalaya scheme was started by Lalu Prasad in 1991 and supposed to provide education to cowherds even as their cattle grazed outside the school. The scheme is almost defunct now.

Agreed, during Nitish Kumar’s rule (2005-2015), there has been stress on road construction and I am told the state has much better roads now, but there is also a lurking fear that in case the JD (U) forms a government in coalition with the RJD, development may once again take a back seat. Kumar may prioritize political maneuvering to development of education, roads and the health sector.

Corruption is another factor which rises to alarming proportions when one refers to Lalu Prasad’s tenure. After all the former Railway Minister is not in the electoral fray for his conviction in a fodder scam case.

Lalu was given five-year prison by a special CBI court in Jharkhand in October 2013. He was subsequently given bail by the Supreme Court of India. Nitish Kumar’s promise on providing a clean and honest government does get dented by his alliance with the RJD.

During my 11-day tour, I also witnessed how Lalu Prasad drew Yadavs and other poor sections of the society. I heard people making fun of him and call him names like ‘Lalua’ and ‘Pagla Raja’. They reviled him for putting development on the backburner. Yet these very people turned out in full force to hail him in public meetings and vote for his party, enamoured by his rustic charm and identity politics, at the hustings.

People claimed to understand that Lalu promoted Bhagwati Devi, a stone quarry worker, as a part of his identity politics to garner votes of poorer sections but still went along with him.  Devi belonged to Mushahar (rat catchers) caste and became MP in 1996.

At some places, Muslims were at a receiving end from Yadavs. For instance, near Barauni, I met a Muslim youth Abdul, a cowherd who did not know what a ballot was and had never ventured near his village school during the elections for fear of Yadavs who would carry long sticks.

Yadavs, barring some better educated ones, credited Lalu for bringing about their political empowerment (true to an extent) in Bihar and other states. I am sure a large number of them still do.

Many Muslim youths may not remember how Lalu as Chief Minister of Bihar had ordered the arrest of Lal Krishan Advani under National Security Act (NSA) in 1990 during the latter’s rath yatra campaign for construction of Ram temple in Ayodhya but might still prefer the RJD-JD (U)-Congress combine to the Hindutva BJP.

Lalu’s secular image, role in implementation of mandal commission report on reservation for other backward castes (OBCs), Yadavs in particular, and MY (Muslim-Yadav) vote bank is what has forced Nitish, who despite having wooed extremely backward classes (EBCs) has failed to carve out a substantial vote bank of his own, to eat humble pie and form an alliance with him.

Lalu and the RJD-JD (U)-Congress combine are trying hard to resurrect Lalu’s image as a saviour of the largest minority and the OBCs in India. Will they succeed? We will have the answer on second Sunday of November.

Previous: Let’s make sure that cleaning up the world’s water doesn’t send our climate targets down the gurgler
Next: The Kickback Kid