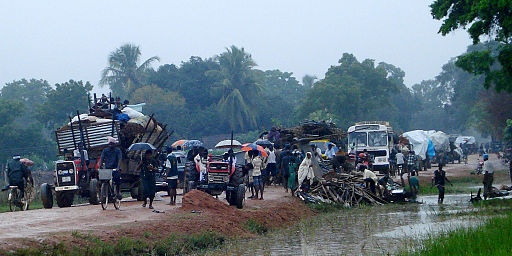 Photo : By trokilinochchi under Wikimedia Commons

In Malaysia for a second family wedding, we are surprised at the different sets of migrant workers we encounter. Indonesians, Filipinas, Bangladeshis, Tamils and Punjabis. Walking around the less touristy part of Johor Bahru, popularly known as JB, my husband Stan was moved by an elderly Tamil man. Stan was carrying our 1-year-old granddaughter when the man stopped him with a sad smile.

‘I was happy once, like you. Carrying my granddaughter, playing with my grandchildren back home in my village in India.

At our age, grandchildren make life worth living. What else is there to live for? Now, here I am, no family, eking out a living. For what?

I really don’t know. At home there’s no food, no prospects. So I was forced to come here for work, to eat and to send money home. But there’s no joy in my life. What else to do? The poor have no choices.’

And he walked off, tears in his eyes, a forlorn, bent, defeated man.

In London, one weekend a decade ago, we were totally lost, navigating our way to my aunt’s house in north London. We took a wrong turn and found ourselves in an obviously African immigrant quarter. There was loud music, colourful African clothes and exotic food smells. Another turn and there was a Bangladeshi food festival on the streets.

A few miles away, around Stamford Hill, orthodox Jewish people in their Sabbath best were visiting friends and families. On days other than the Sabbath, a superb Jewish bakery sent out the wonderful aroma of freshly baked bread, bagels and Jewish treats. I adore London. It always feels like the centre of the world. Vibrant, alive, even on the greyest, dreariest winter day.

Yet the cosmopolitan ambience comes at a price. Locals resent the newcomers taking over their turf.

I remember Rome in the early 1970s. Italians loved Indians. Loved everything foreign and exotic. Now, with an influx of African, Indian and Bangladeshi immigrants, the distrust, resentment and anger is palpable. I read a report today which stated that the most common surnames of Italian entrepreneurs are Hu, Chen and Singh. Chinese and Indian names. Rossi, Italy’s most common surname, ranks fourth!

While it amuses us Indians to read that Punjabis are making mozzarella in Italy, it also makes you wonder, ‘Gosh what is the world coming to?’ Because, while Punjabis are farming in Italy, more and more of the hardest agricultural work in Punjabi fields is done by migrant labour from our poorest states of Bihar and Uttar Pradesh.

Within India, the more affluent states like Kerala, Punjab and Haryana are filled with migrant labour from the desperately poor parts of the country. I’m sure in another 50 years it will be difficult to spot ‘the natives’. Intermarriage of different communities and religions has begun. It means, of course, tradition, the old ways, the distinct ethnic and cultural practices will be lost as an amalgamation takes place in the melting pot. A lot like in the US. A Kashmiri marrying a Tamil Brahmin produces offspring that is uniquely new, obviously, in a culture where marriages used to be closely monitored, arranged by rigid caste and creed considerations.

The tragic old Tamil worker underlined the sadness of the immigrant everywhere. Starving or persecuted at home, fleeing to an alien country where she is despised, resented and unwanted. I read about desperate immigrants drowning, or dying as they attempt to flee to a ‘better life’; a dead baby is found clinging to its dead mother in an abandoned truck in Europe. The Rohingya boat refugees trying to land in Thailand, Indonesia and Myanmar. Syrians fleeing for their lives from ISIS killers. It is impossible to even begin to comprehend the plight of these desperate people.

My grandparents, with their families, fled Burma to escape the advancing Japanese army. They too trekked through the Burmese jungles to reach India and safety. Since they were ethnic Indians, they did not face hostility or resentment. But also, importantly, they lived in another era. Over the decades, India welcomed Jewish, Chinese, Parsi and Armenian refugees.

But those were kinder times.

Previous: Europe won’t resolve the ‘migrant crisis’ until it faces its own past
Next: Government’s declaration of One Rank One Pension Today