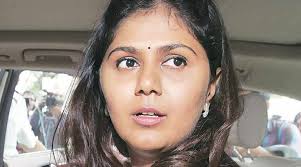 Why is Pankaja Munde trending today?

Maharashtra’s rural development minister Pankaja Munde, now famous for the #ChikkiScam and #BiscuitScam, has fallen into further trouble. Media has gone into an overdrive reporting that one of the BJP minister’s aide was seen carrying her footwear during a recent visit to Sonpeth, Parbhani district. While Munde promptly explained “that person was my private employee and not government servant,” and urged people to see that, “the real news is the drought and the condition of farmers.” However, Twittersphere is an unforgiving space and she was was immediately trolled by Twitterati. Let’s see what they had to say.

I want to carry Pankaja Munde s slippers for a box of chikki ?

Children should make their own ways rather then fit into their parents shoes..their is a diff between Pankaja Munde and Jayant Sinha..

Pankaja Munde would need 3 people if she's to make speech in parliament 1 to carry notes 2 to hold when she reads pic.twitter.com/RED0Mpib9y

The real news is that stupid minister praying for rain rather than doing something #munde http://t.co/De9VpxhgYz pic.twitter.com/DdDXiLXxoa

Previous: A Hanging in India
Next: Girls Gang Up Against Early Marriage