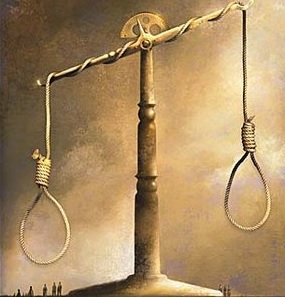 A Hanging in India

NEW DELHI – On July 30, Yakub Memon, a chartered accountant and the brother of a notorious gangster now living in self-imposed exile, was hanged for complicity in the planning and execution of serial bomb blasts that killed 257 people in Mumbai in 1993. The hanging, India’s first in three years, has prompted reactions ranging from dismay to scarcely concealed bloodlust. And it has intensified the domestic debate over the death penalty.

To be sure, no one suggests that India’s judicial system did not function properly in Memon’s case. He was convicted according to due process of law, and his punishment was in accordance with valid statutes. During his 21 years behind bars, Memon exhausted every possible appeal available to him, including one for presidential clemency. The Supreme Court even held an emergency hearing at 2:30 in the morning, just hours before the execution was set to occur, before deciding to allow it to proceed.

But the question remains: Should capital punishment be on the books at all?

As an opposition legislator, I attracted considerable opprobrium for voicing my opinion, on the morning of Memon’s hanging, that it should not be. I expressed my sadness that our government has killed a human being, whatever his crimes may have been. State-sponsored killing diminishes us all, I added, by reducing us to murderers, just like those we are punishing.

My view is not popular in India, and my own party disclaimed my statement. But my position is based on ample evidence that the death penalty does not actually deter the crimes it punishes. Data collected by the Death Penalty Project at Delhi’s National Law University demonstrate conclusively that there is no statistical correlation between applying the death penalty and preventing murder. This evidence echoes similar findings in other countries.

My statements were also motivated by problems with the way capital punishment is imposed in India. The Supreme Court has declared that the death penalty should be applied only in the “rarest of the rare” cases. And, indeed, the last three executions in the country stemmed from terrorist offenses that threatened or took a large number of lives.

But the decision to impose capital punishment remains highly subjective. Indeed, whether the death penalty is meted out depends on a number of variables, beginning with judicial and social biases. Public outrage – potentially fueled by inflammatory media coverage – can push for a harsher sentence, especially in cases relating to terrorism or crimes against women.

Economic status also comes into play, with poor criminals being executed much more often than wealthy ones, not least because they cannot afford high-quality legal representation. And the president’s decision to commute a sentence is subjective.

A 1983 case held that one way to determine whether a crime meets the “rarest of the rare” requirement is whether the community’s “collective conscience” has been “so shocked” that it expects those wielding judicial power to inflict the death penalty, regardless of their personal opinions. This leaves much room for the arbitrary and disproportionate application of capital punishment.

From 2010 to 2013, 436 death sentences were handed down by lower courts. Of those, 280 were commuted to life imprisonment, with many of the other cases likely to remain in limbo for decades. As for the death sentences that have already been carried out – two in that four-year period – it is impossible to ascertain the objective criteria that made the crimes in question more heinous or “rarer” than those that did not merit execution.

Ambiguity and subjectivity have no place in matters of life and death. Yet, when it comes to the imposition of capital punishment, both are prominent. That makes it all the more difficult to justify the practice.

Just a couple of weeks before Memon’s execution, India’s Law Commission, a government body composed of retired judges and legal experts that works for legal reform, organized consultations to assess the effectiveness of the provisions governing the death penalty in India and the purpose of the penalty itself. Unsurprisingly, based on the evidence and the opinions presented at the Law Commission’s hearings, there was a general consensus that the courts are unable to adopt a fair and non-discriminatory approach to the death penalty, and support for its abolition was overwhelming.

That will not happen any time soon. The Indian public overwhelmingly supports the death penalty, especially for convicted terrorists. The debate over Memon’s hanging was often emotional, with media interviewing survivors of the Mumbai blasts.

Moreover, it has been suggested that the alternative to the death penalty – life imprisonment – would make India vulnerable to hijackings and other assaults by terrorist groups attempting to free their jailed comrades. In the face of such security concerns, my argument that taking a human life is wrong, and that the state should not compound criminal wrongdoing with its own, found little resonance.

Globally, India is part of a dwindling minority. More than 130 countries have abolished the death penalty. Twenty-five countries have it on the books, but have not executed anyone for decades. That leaves roughly 30 countries that still apply it.

India’s membership in this group has international repercussions; for example, European Union countries will not extradite criminals to countries where they may face execution. But the real problem is deeper: capital punishment is, at its core, about nothing more than retribution.

It may be tempting to declare that anyone who kills (or participates in killing) innocent people does not deserve to live. But is revenge a worthy motive for a state’s actions, especially toward its own citizens?

For now, India remains blind to the case for abolishing the death penalty. One day, I am sure, it will see the light. Until then, the lonely battle for its abolition must continue.

Shashi Tharoor, a former UN under-secretary-general, is a member of India’s parliament for the Congress party and Chairman of the Parliamentary Standing Committee on External Affairs.