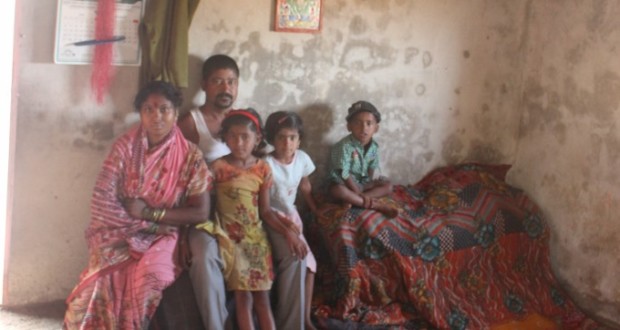 In Manegaon, Baburao Sadashiv Bhajnavle displayed immense courage when he called off the wedding of his niece twice as neither groom was willing to give joint property ownership. (Credit: Suchismita Pai\WFS)

Meet Men Who Shun Dowry, Share Property With Their Wives

Solapur (WFS) – The beautifully framed copy of the Preamble of the Indian Constitution may seem rather incongruous in the rustic home of Siddharam Bodre, resident of Sonalwadi village, but then this father of two daughters has taken the essence of its message to heart.

The dusty little hamlet of Sonalwadi in Solapur district of Maharashtra would hardly seem to be the place that raises the bar on justice, dignity and equality, which have been promised to each citizen under the Constitution, but the menfolk in this area turn out to be full of surprises. States Bodre emphatically,

“Women and men are equal partners. In our village, men chip in to do household duties, we have ensured that all married women are co-owners of their home and even the exchange of dowry during marriage is an absolute no-no.” 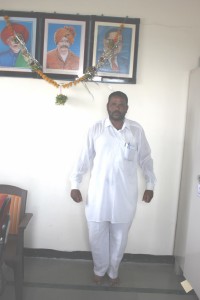 Siddharam Bodre, a professional wrestler from Sonalwadi village, set an example by making his wife the joint owner of his home and later influencing a positive attitudinal change among his peers in the village. (Credit: Suchismita Pai\WFS)

Right about now, many readers may be shaking their heads in utter disbelief but this egalitarian state of affairs is instantly confirmed by the fact that each one of the over 1,800 residents in the village live in homes that are jointly owned by “happy couples” that are willing to support each other through thick and thin. Of course, Bodre is quick to point out that till a few years back men and women of Sonalwadi were nowhere close to being the “equal partners” they are today.

A wrestler by profession, Bodre, too, had little patience with women till he became part of the Samajhdar Jodidaar (Responsible Partner) intervention that was initiated in the region in 2010.

More adept at throwing punches in the ‘akhada’ (wrestling ring) than talking to his own wife, he used to firmly subscribe to the belief that women must be kept in their place even if it was through force. This attitude extended to his daughters as well. He barely regarded them as a part of his family – they were just girls who would get married and leave home.

Underway in 100 villages in the state, this community-based initiative of the Centre for Health and Social Justice (CHSJ) and United Nations Population Fund (UNFPA) enlists men to be trained as animators, who can influence a positive attitudinal change among their peers.

Recognising his innate potential to lead by example Gadhire picked Bodre to become an animator though, at first, he was very reluctant.

“Had it not been for the extensive sessions conducted by Gadhire, where he took pains to talk about what ‘mardanagi’ (masculinity) truly means and why men and women must support each other, my patriarchal mindset would never have allowed me to develop a relationship with my wife and girls,”

So dramatic was Bodre’s transformation that he was the first in Sonalwadi to convert his home to joint ownership. Moreover, with an altogether fresh perspective on marriage, he decided to break off the wedding of his elder daughter on the same grounds,

“When I talked about joint home ownership, they became offensive. I want a secure future for my daughter and having a place to live even if something untoward happens is a non-negotiable part of it.”

‘Include my daughter’s name in your property papers after the wedding’ is certainly not a condition that parents in India are in a position to put forth. In fact, as per ‘tradition’, they are expected to provide dowry and fulfil other ‘demands’ expressed by the prospective in-laws. But Bodre is convinced that he is doing the right thing,

“We ensure that this is a prerequisite for every marriage that takes place in the village. Why should my daughter not have that safety net?” 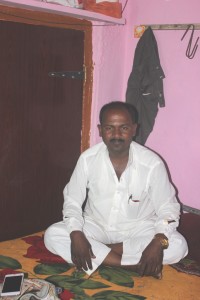 Raosaheb Namdeo Aldar of Karandewadi village is happy that the joint ownership rights of property have girls secure in the knowledge that they will always have a place to call home. (Credit: Suchismita Pai\WFS)

Sonalwadi has indeed come a long way from the days when the gender bias here was so deep-rooted that women would consciously walk several kilometres out of their way to avoid running into men as they went about doing their daily chores, such as fetching water or grazing cattle. Girls would drop out after Class Seven and get married thereafter.

“My own daughter would have met with the same fate,”

confesses Bodre, who is busy with the wedding preparations of his 18-year-old daughter nowadays. He has finally found a family that is happy to give his daughter her rightful place in their home and a share in the property.

Apart from Sonalwadi, the winds of change have swept through other villages as well. Not only has ‘hunda’, or dowry, become a bad word in these parts but marriages are being solemnised only after the bride is assured of a formal share in the marital home.

And yet, as Sunita Dhanwade of Astitva Trust puts it,

“It wasn’t easy to turn people around. In the beginning, it was a men v/s women battle.There was a lot of anger among the men and any softness was perceived as a weakness.

A wedding without dowry was impossible. More so, because it implied that the groom or his family had some ‘defect’. It took us time to convince animators like Bodre that men and women are on the same side and that their real enemy is regressive practices like dowry, illiteracy and underage-marriage.”

In Manegaon, Baburao Sadashiv Bhajnavle called off the wedding of his niece twice as neither groom was willing to give joint property ownership. He was prepared to stand up for the rights of the very niece whom he has once been okay with doling out punishment because “she was girl who should be disciplined”.

Bhajnavle confesses that earlier he was sure that his wild temper was his “strength” and was proud that he had no part in bringing up his children. Like everyone else, when the SJ programme started he made his scepticism pretty apparent.

He would go through the motions of ‘helping’ his wife to prove that it would not make any difference to his life. Yet, almost overnight something wonderful happened – his daughters started showering him with love and respect he simply couldn’t ignore. So he began chipping in at home in earnest, albeit, covertly. It was an interesting exercise he was made to do during a sensitisation meeting that triggered a total change of heart.

“We had to list out all the activities that men and women do in a day. I was taken aback to see the physical and emotional hardship that a woman endures to make her family comfortable. From then on I decided to openly support my wife,”

Not surprisingly, Bhajnavle became the first in Manegaon to get his property jointly registered in 2011. Some have even gone a step further – Vinod and Dhanajay Patil, who purchased land recently, did so in their wives’ names. 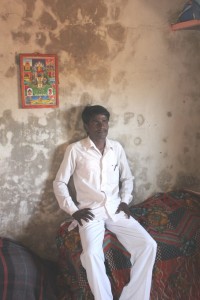 In Gaudwadi village, Datta Gulig, 25, is the reason why 882 home owners have officially inked their wife’s name into the joint ownership papers of their houses. (Credit: Suchismita Pai\WFS)

In Gaudwadi village, Datta Gulig, 25, is the reason why 882 home owners have officially inked their wife’s name into the papers. Once unemployed and goalless, his association with the SJ programme has enabled him to “lead a meaningful life”.

During his wedding Gulig had flatly refused to take ‘hunda’ much to the disgust of his family but “my father is now proud of my approach”.

“Girls have finally found a voice in their own homes. They fearlessly argue if anyone complains about a gift coming from their parents’ home. They are secure in the knowledge that they will always have a place to call home,”

he says, with a smile.

Bodre, Baburao, Gulig and Aldar may have started off as reluctant crusaders, but they are proud of the fact that

“we are finally living the equality that our Constitution promises”.

Previous: Tibet After the Dalai Lama
Next: After U.S. Equal Marriage Win, the Global Struggle Continues