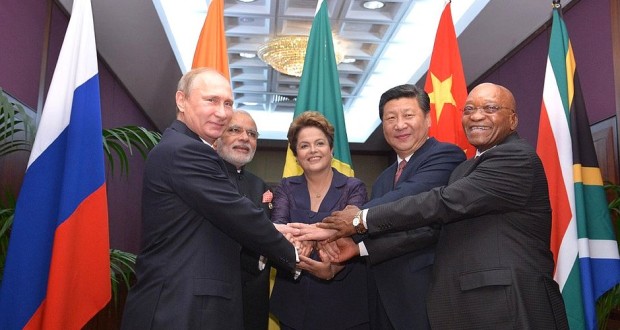 BEIJING – Sailing down the Moscow River on a cool evening earlier this month, I found myself in intense conversation with the chair of the Foreign Affairs Committee of the Chinese National People’s Congress (NPC). Meanwhile, South African and Brazilian parliamentarians were swaying to Russian music and a guide pointed out the sights. The first parliamentary forum of the BRICS countries – Brazil, Russia, India, China, and South Africa – had come to a convivial conclusion.

Before the meeting opened, many wondered whether the five parliaments could possibly find common ground. What on earth could India’s fractious and rumbustious Lok Sabha, with its impassioned debates and disruptions, have in common with China’s decorous NPC, a rigorously controlled echo chamber for Communist Party decisions?

Membership in the new BRICS grouping, many believed, did not provide a strong enough basis for cooperation.

Such skepticism has been leveled at the BRICS grouping itself from its inception, with some dismissing it as the only international organization invented by an investment bank. Specifically, the term BRIC was coined more than a decade ago by then-Goldman Sachs analyst Jim O’Neill, who did not initially count South Africa among the ranks of the major emerging economies.

But Russian President Vladimir Putin liked the idea from the start, and suggested in 2006 that the four countries should meet regularly. The grouping was soon formalized, with annual summits planned. South Africa joined in 2011, solidifying the BRICS’ presence across the global South, with only Russia in the North.

In fact, this is why Russia’s centrality to the enterprise is so intriguing. Given that Russia was, until recently, a member of the G-8 – the northern hemisphere’s most important economic grouping – it would seem to have little affinity with the other four BRICS members, which have traditionally been viewed as the leading developing-country voices in global forums. But, by seizing on the idea of the BRICS, Putin revealed his desire to build an alternative global platform – and advance an alternative worldview.

The continual deepening of the BRICS enterprise has caught many international observers by surprise. In addition to their annual summits – which have produced joint declarations covering every major global issue, from questions of peace and security to United Nations reform – the BRICS have conducted foreign ministers’ meetings and engaged in think-tank consultations.

Moreover, the BRICS have created the New Development Bank, headquartered in Shanghai and headed by one of India’s most respected private-sector bankers.

Seen against this background, the recent parliamentary forum is just the newest in an expanding array of institutions and mechanisms that are establishing the BRICS as an international grouping that cannot be ignored.

The BRICS are emerging at a time when the future of the international system that arose in the immediate aftermath of World War II is increasingly being called into question. After two world wars, numerous civil wars, colonial oppression, and the horrors of the Holocaust and Hiroshima, the far-sighted statesmen of the time decided that liberal internationalism, based on the UN charter and allied institutions, was the only way to prevent more carnage.

And, indeed, for seven decades, that system has largely achieved its goals. It has broadly ensured global peace, although at the cost of shifting many conflicts to the periphery. And it did not benefit only the developed world; it also ensured decolonization, promoted development, and found ways to accommodate the voices of newly emerging countries.

But it seems that existing arrangements are no longer adequate. China and India are seeking global influence commensurate with their economic weight; Brazil and South Africa are emerging as continental powerhouses, and hydrocarbon-fueled Russia is chafing at its status on the margins of the Western system. Not surprisingly, many think that the current system is ready for a makeover.

The existing world powers, however, will not cede their influence so easily. It is absurd that China’s voting power in the World Bank and the International Monetary Fund is the same as Belgium’s. But the G-20’s effort to create parity in these institutions between the advanced economies and the emerging and transition countries has ground to a halt. Indeed, although US leaders technically agreed to IMF voting reforms, the US Congress has so far refused to ratify them.

It is important to note that countries like India and Brazil – unlike, say, Germany and Japan a century ago – are not seeking to overturn the world order. All they want is a place at the high table. Barring that, they have little choice but to build their own – though India, Brazil, and South Africa have reason to wonder if a Chinese-led world order would be an improvement on the current one.

The BRICS’ response is both understandable and disquieting. As countries acquire economic and military power, they start exercising their geopolitical muscle, too. The challenge for advocates of world order is to accommodate emerging powers within a framework of universal, predictable rules and global structures that ensure everyone a fair deal, appropriate for their size, capabilities, and contributions to the international system.

Today’s world leaders appear to lack the statesmanship, the breadth of vision, and the generosity of spirit of those who created the post-1945 world order. By clinging stubbornly to the system they dominate and barring the door to new entrants, they have left those outside little choice.

What the BRICS countries have in common is their exclusion from the places they believe they deserve in the current world order. That may not look like enough of a basis for a credible new international system. But, with their economies on course to overtake those of the G-7 before 2050, looks can be deceiving.

The fact is that, if the BRICS are not allowed to help lead within the existing global system, they will inevitably create their own. What that might mean for the world order established in 1945 is anybody’s guess.