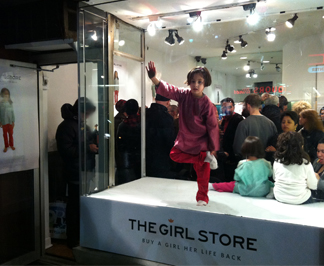 Please take a moment to view this website. ‘100% genuine girls.Young. Innocent. And available…’ reads the intro.

No, dear readers I haven’t lost it completely. The first I saw of this ad was when two editors sent it to me separately, asking me if I’d like to blog about it. I was predictably disgusted and I’m not alone, apparently. Several bloggers have commented on it, though the publicity managers of Mahindra, a key player in the Indian automobile industry, defend it.

They feel the shock value has got them what they aimed for – attention seeking publicity. Ms. Mehta, spokesperson for Mahindra says:

Some were stunned by the name, some said we are promoting child trafficking. But we are doing exactly the opposite. We are saying “buy a girl her life back.”

She informs us that the 1000 or so donors they attracted through the ad are supporting – or ‘buying back’ – the lives of 75,000 girls from across India. My feeling, like many other viewers of the ad, was did they have to resort to cheap, tawdry sensationalism? Did they really need to run an ad in such appallingly poor taste?

Mahindra is a billion-dollar business. They could give the money away in the blink of an eye without feeling the pinch. Using crude sexual gimmickry is surely unacceptable by any standards, besides being shameful and disrespectful to the girls in question. It’s crass and revolting.

A few decades ago, we refused child sponsorship which would have ensured hassle free funding for our project with adivasi people in South India. Our donors advised us that accepting the sponsorship would make our lives infinitely easier financially. It would make everything smooth sailing.

But we thought the idea was wrong. In some indefinable way, we felt it was demeaning to the child, to the family and to the community. As a funding strategy it simply lacked dignity.

When I thought about it carefully, though the ad shocked and revolted my sensibilities, at another level, I’m not seriously surprised. Values and ideas about what’s acceptable have changed so drastically in the last two decades that I sometimes feel we are seen as living in another century if we protest about things that outrage us.

In the 21st century, the end appears to justify the means, mostly. It leads me to wonder about a question that has bothered me over the years. Should we take money from a cigarette manufacturer to pay for our impoverished cancer patients?

Mother Teresa thought it was okay to take money from questionable characters if it was to help the poor. It’s practically a mortal sin now to even question, let alone criticize, Mother Teresa. Canonizing may have its consequences.

I was also appalled when I heard that some young women I know were happy to organize a bunny party to raise money for charity. But, apparently only ageing feminists would consider that shocking in the year 2012. The young women were genuinely puzzled. Why not a bunny party? They didn’t get it at all.

Yes, the times they are a changin’. Maybe I’m getting old. Perhaps we can get a sense of how others react to this by throwing it open to our readers. Comments please everyone?

Previous: One India, One Asia
Next: Daagi Mantri Modi Ke