Home > Writathon > Being Male > Woes of men as non-custodian parents 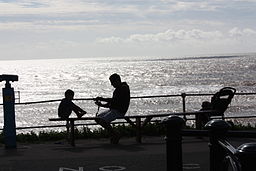 Photo: By Brookie via Wikimedia Commons, under creative commons

Woes of men as non-custodian parents

In the fight for child custody and support, law favors custody of children to mothers and as a result the fathers in India end up being drained emotionally as well financially, to maintain constant contact with their child. Indian law needs to specifically lay down the rules for shared parenting or joint custody of children of divorcing parents.

Mumbai: Kim Prabhakar (name changed) travels to Bengaluru from a Kerala town in a bus. He then takes a connecting bus to Mumbai. In all, he travels for over 24 hours twice a month to meet his eight-year-old daughter.

According to lawyers, before every vacation – summer, Diwali or Christmas – there is a sharp increase in the number of applications seeking access by non-custodian parents. As per an estimate, 10 such applications are filed daily at most family courts almost a month before the vacations start as against four or five during other times of the year.

Courts have repeatedly said that children should not be used to settle scores between warring parents. However, their welfare is overlooked more often than not.

Prabhkar stays in a lodge once he is in Mumbai and leaves the city soon after meeting his daughter. He says:

“When applications like mine come up for hearing, the estranged wives will state that the maintenance amount is not paid. The court will hence refuse to entertain our plea for access to our children till the time we clear our arrears.”

“I want to ask a simple question: Who will compensate me and how, on the days when I have been denied access to my child or stopped from talking to her on the phone?”

For many such Kim Prabhakars, the only way out is to approach the court seeking execution of the courts order. However, on an average 40 applications for executions are filled in Mumbai family courts, of which less than 10 would be for access execution.

The other issue faced by the non-custodian parents is that an appointed advocate does not articulate their concerns well in court. Thus in most custody cases it is not unseen that the father is arguing his case in person before the court.

“Often most estranged husbands take to study law. It is my problem and who better to persuade the court than myself?”

In Mumbai and other cities, there are groups of men who profess legal remedies to non-custodian parents when they are denied access by the custodian parent. Law professionals or those who have been through similar issues also dole out legal advice to such men.

Save India Family is one such group. Its members meet every Sunday in a park at Mulund East and Borivali, to discuss legal problems, guide people or help them try work out some solutions. Pune-based Vaastav Foundation is another organisation that roots for men’s rights.

Advocate Paresh Desai who has handled several such cases and is a attorney at the family court says:

“The need for a comprehensive parenting plan is the need of the hour. Custodian and non-custodian parents have to understand one simple fact that the welfare of their child has to be the top priority. Denying access to one biological parent means depriving the child of the love, which s/he should get.”

Previous: The battery revolution is exciting, but remember they pollute too
Next: The philosophy of the Soldier Mountaineer Colonel Narinder Kumar ‘Bull’!