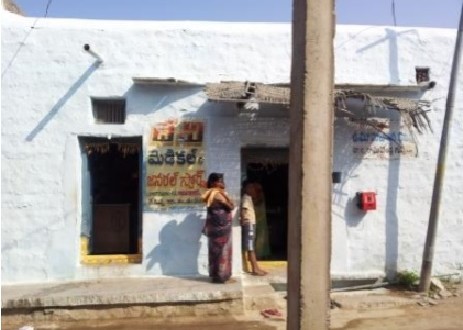 Villagers outside the residence of the RMP awaiting treatment| Photo: Riti Sinha

Ghattu: Excessive antibiotic doses, unnecessary injections, steroids, consumption of unlabelled medicines. This is the reality of healthcare in Ghattu village, located within the Ghattu Mandal in the Mahabubnagar district which despite the availability of the government-owned primary health centre (PHC) within the village, is home to a large number of unqualified medical practitioners providing health care to at least 95 percent of the population.

Inspite of no valid licence to practice any system of medicine, the “Registered medical practitioners” (RMPs) are very popular in the village because they are easily accessible in the case of medical emergencies.

While there were just two qualified doctors in the PHC for a population of 5000 persons, there were at least 20 RMPs in the village, some of whom did not even possess high school education.

The locals rely on RMPs to avoid traveling to the nearest town 35 kms away as absenteeism is rampant in the PHC and the doctors are usually unavailable to attend to patients with fever, headache and minor injuries. They first try locally with the RMP for immediate relief. Only if there is no relief, do they go to qualified doctors.

Providing doorstep treatments, with no fixed working hours, gives the RMPs, an advantage over the qualified doctors in the PHCs who have fixed working hours. It was seen that in five days, the medical officers (MOs) visited the PHC only once. Some MOs had private practices parallely in the nearby town of Gadwal. 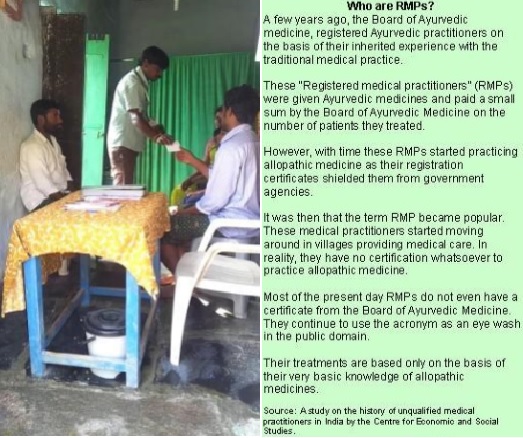 Inside an RMPs clinic with no facilities whatsoever | Photo : Riti Sinha

With no separate clinics and many of them practicing out of residences, most of the RMPs had only a stethoscope and a thermometer as medical equipment. Only three of the RMPs had a BP apparatus

According to Dr. Raghu, the MO of the Ghattu village,

“most of the villagers were not aware that RMPs are not qualified to give any kind of treatment.”

These practitioners have a list of antibiotics for quick results which they use to prescribe multiple antibiotic doses along with steroids which usually gives instant relief to the patient. They also tend to give IV fluids and injections for every illness to impress the patients. 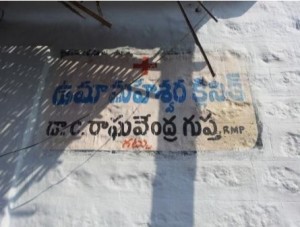 The sign board outside a house in the village indicating an RMP | Photo: Riti Sinha

They refer the locals to private clinics for complicated cases and deliveries, for a commission. The villagers are forced to go to the private doctors in towns who again charge separate fees over and above the cost of medicines and injections.

This impacts the expenditure on healthcare for households in the village.

In spite of all this, the villagers refuse to acknowledge the burden they are subjected to financially due to wrong and delayed treatments by RMPs.

For diagnosing diseases like TB or malaria, the RMPs wait for at least 7 days for the fever to subside before they send them for blood tests to the town of Gadwal. Many a times this has led to an aggravation of the problem and even hospitalization.

S.C Gupta, an RMP in the village claimed that he charged the villagers per visit which included consultation, injection, tablets , which did not exceed Rs.50.

However B. Basava, a patient who was not cured by the RMP came to the PHC with the prescription which had the wrong medicines given by the same RMP and that had cost him Rs.200.

The fact that this practice is rampant across most of the villages implies the need of their services at least in the short run.

However, with no monitoring process in place on the qualification of the RMPs, the health care of the villagers is at risk. Alternative sources of treatment and educating the public about it seems the only way to end the dependency on RMPs.

Hussain, the community Health officer of the village was of the opinion that,

“Unless people avoid the RMPs on their own, no one can stop this practice.”

Previous: The Drag on E-Cigarettes
Next: To kiss or not to kiss? A very Indian question