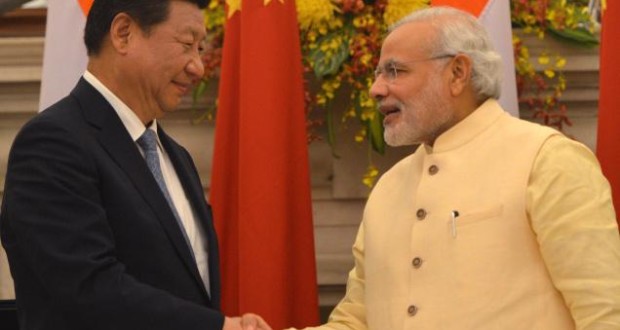 My friendship with Xi Jinping is 'plus one': PM Narendra Modi

NEW DELHI – China and India have a fraught relationship, characterized by festering disputes, deep mistrust, and a shared ambivalence about political cooperation. Booming bilateral trade, far from helping to turn the page on old rifts, has been accompanied by increasing border incidents, military tensions, and geopolitical rivalry, as well as disagreements on riparian and maritime issues.

Since taking office last year, Indian Prime Minister Narendra Modi has sought to transform his country’s relationship with China, arguing that Asia’s prospects hinge “in large measure” on what the two countries – which together account for one-third of the world’s population – “achieve individually” and 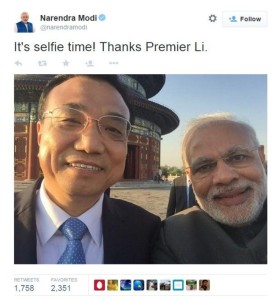 But, as Modi’s just-concluded tour of China highlighted, the issues that divide the demographic titans remain formidable.

To be sure, China’s leaders fêted Modi in style. When Modi arrived in Xian – one of China’s four ancient capitals and President Xi Jinping’s hometown – Xi took him on a personal tour of the Big Wild Goose Pagoda. (Modi subsequently boasted of his close “plus one” friendship with Xi.)

In Beijing, Premier Li Keqiang posed for a selfie with Modi outside the Temple of Heaven.

What China’s leaders did not do was yield on any substantive issue – and not for lack of effort on Modi’s part.

Despite Modi’s pragmatic and conciliatory tack, his request that China “reconsider its approach” on some of the issues that are preventing the partnership from realizing its “full potential” went unheeded.

Alluding to a series of Chinese military incursions since 2006, Modi declared that “a shadow of uncertainty” hangs over the border region, because the “line of actual control” that China unilaterally drew after defeating India in a 1962 war that it had initiated was never mutually clarified. Modi proposed resuming the LAC clarification process, but to no avail.

In fact, the reason for the continued ambiguity is that, in 2002, after more than two decades of negotiations, China reneged on a promise to exchange maps with India covering the two main disputed sectors –the Austria-size Arunachal Pradesh and the Switzerland-size Aksai Chin, along with its adjacent areas – located at either end of the Himalayas.

Nonetheless, in his zeal to build the bilateral relationship, Modi announced that Chinese tourists are now eligible to receive electronic visas on arrival in India – blindsiding his foreign secretary, who had just told the media that no such decision had been made.

China’s foreign minister hailed the measure as a “gift” – an accurate description, given that China has yielded nothing in return. On the contrary, China has aimed to undermine India’s sovereignty, by issuing stapled visas to residents of Arunachal Pradesh.

Moreover, China – which, by annexing water-rich Tibet, has become the region’s hydro-hegemon – also declined to conclude an agreement to sell India hydrological data on transboundary rivers year-round, rather than just during the monsoon season. So China is not only refusing to create a water-sharing pact with any of its neighbors; it will not even share comprehensive data on upstream river flows.

Making matters worse, there is an unmistakable air of condescension in the pronouncements, contained in the joint statement issued at the end of Modi’s visit, that China “took note of India’s aspirations” to join the Nuclear Suppliers Group, and “understands and supports India’s aspiration to play a greater role in the United Nations, including in the Security Council.”

China is the only major power that has not backed India’s bid to become a permanent member of the Security Council.

Economic outcomes were similarly unequal. Many of the deals Modi made with business leaders in Shanghai – supposedly worth $22 billion – entail Chinese state-owned banks financing Indian firms to purchase Chinese equipment.

This will worsen India’s already massive trade deficit with China, while doing little to boost China’s meager investment in India, which totals just 1% of China’s annual bilateral trade surplus – a surplus that has swelled by one-third since Modi took office and is now approaching $50 billion.

Indeed, China and India have one of the world’s most lopsided trade relationships.

Chinese exports to India are worth five times more than its imports from India. Moreover, China mainly purchases raw materials from India, while selling it mostly value-added goods. With India making little effort to stem the avalanche of cheap Chinese goods flooding its market – despite Modi’s much-touted “Make in India” campaign – China’s status as the country’s largest source of imports appears secure.

China is well practiced in using trade and commercial penetration to bolster its influence in other countries. In India’s case, it is leveraging its clout as a major supplier of power and telecommunications equipment and active pharmaceutical ingredients, not to mention as a lender to financially troubled Indian firms, to limit the country’s options.

By allowing the trade distortions from which China profits to persist – and, indeed, to grow – India is effectively funding this strategy.

As hard as Modi tries to put a positive spin on his recent visit to China, highlighting the 24 mostly symbolic agreements that were concluded, he cannot obscure the harsh strategic realities affecting the bilateral relationship. Without a new approach, the Sino-Indian relationship seems doomed to remain highly uneven and contentious.

Previous: Denied the right to justice: Aruna Shanbaug
Next: The Modi Government Turns One