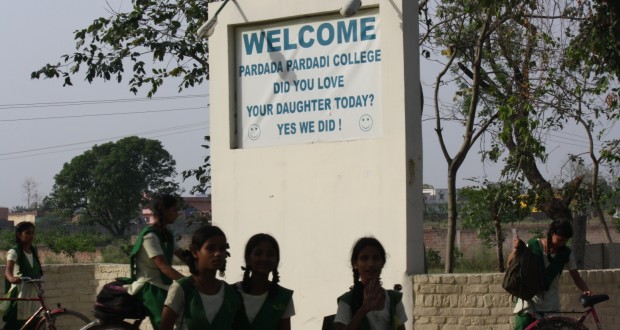 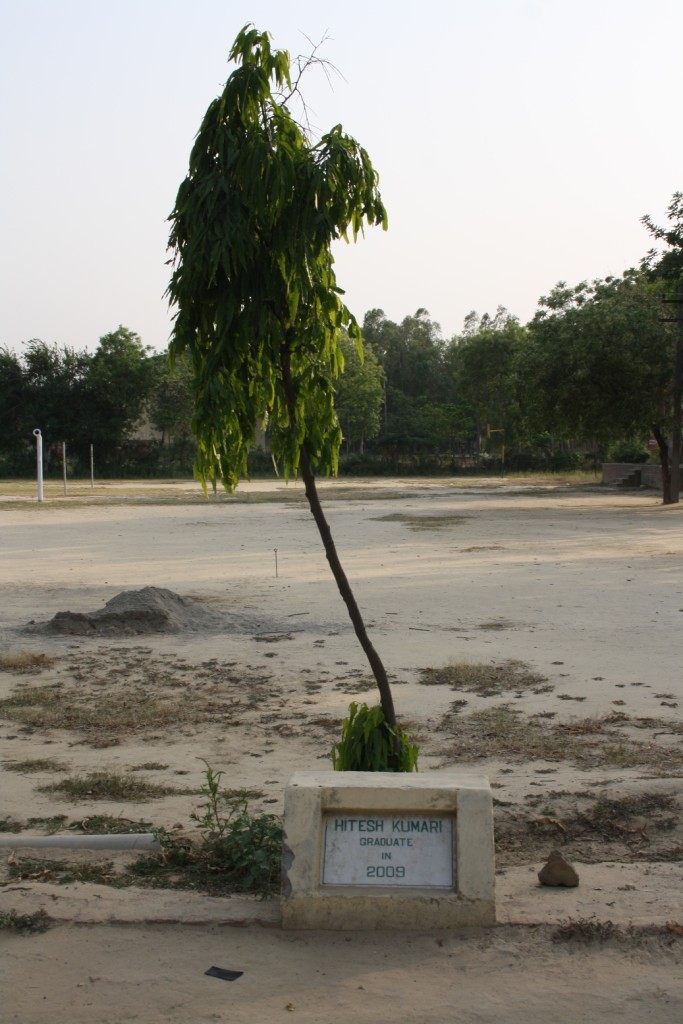 A sapling planted by a student

Anoopshahr: “Did you love your daughter today?” postcard-shaped, billboards carved into walls on either side of the gate, bag to know.  “Yes we did,” the answer is written just under the question cordoned off by smileys on both sides.

Walk in and you have yellow planks shored up on green-yellow painted lamp posts on your right proclaiming with a smiley each, “We don’t tolerate parda(veil). We won’t tolerate discrimination.  I will select my future husband. Beti Abhishap nahin vardaan hai (daughter is a boon not a curse).

On your left you have plaques announcing names of students who graduated in the past and planted a sapling as part of the celebrations.

Welcome to Pardada Pardadi College, a Senior Secondary girls school which pays its students for attending classes, constructs toilets in houses of its meritorious students, finances their higher vocational education and ensures their employment.

Set up by Virender ‘Sam’ Singh, a former top honcho of multinational DuPont who quit his job in America to return to his roots 15 years back, the school located in Anoopshahr, a feudal, crime-prone belt in Bulandshahr District in Western Uttar Pradesh, is fashioning a revolution on women empowerment.

Run by Pardada Pardadi Education Society (PPES), the school believes in a motto that female education and employment is central to eradication of rural poverty. 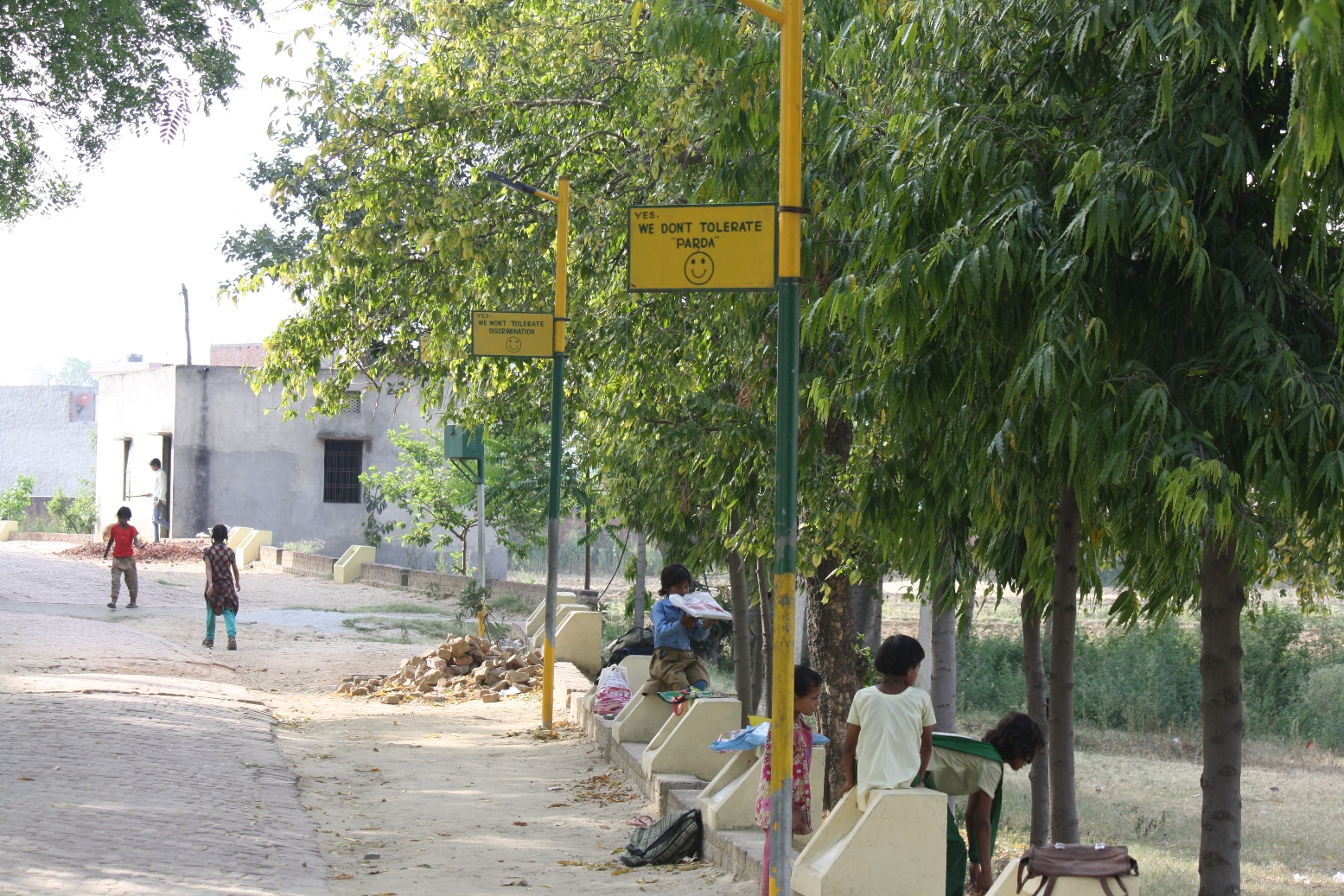 Slogans in the school

Incentives against dropping out

Established with 45 students and two teachers in year 2000, the school today has grown to around 1300 students and 60 teachers. Thanks to its innovative and aggressive campaign on girl education, the number of dropouts has gone down substantially and today its students are studying in universities and institutions in Bangalore, Noida and United States of America.  A host of them are employed in hospitals, schools, hotels and call centres around the country.

The school pays Rs.10 per day to students in and above class VI for every attendance. It buys books, papers, two pairs of uniforms, a pair of shoes and mid day meal to every student enrolled in the school.

The deposition of Rs. 10 every day for attendance in students’ bank account makes sure that she gets a handsome amount when she graduates (the school uses graduation for school pass out the way it is done in American) from the school.

The student can use the money as pocket money during her advanced study. The only commitment she has to make for access to the fixed deposit is that she will not marry before 21 years of age.

Girls’ prestige in society up with toilets 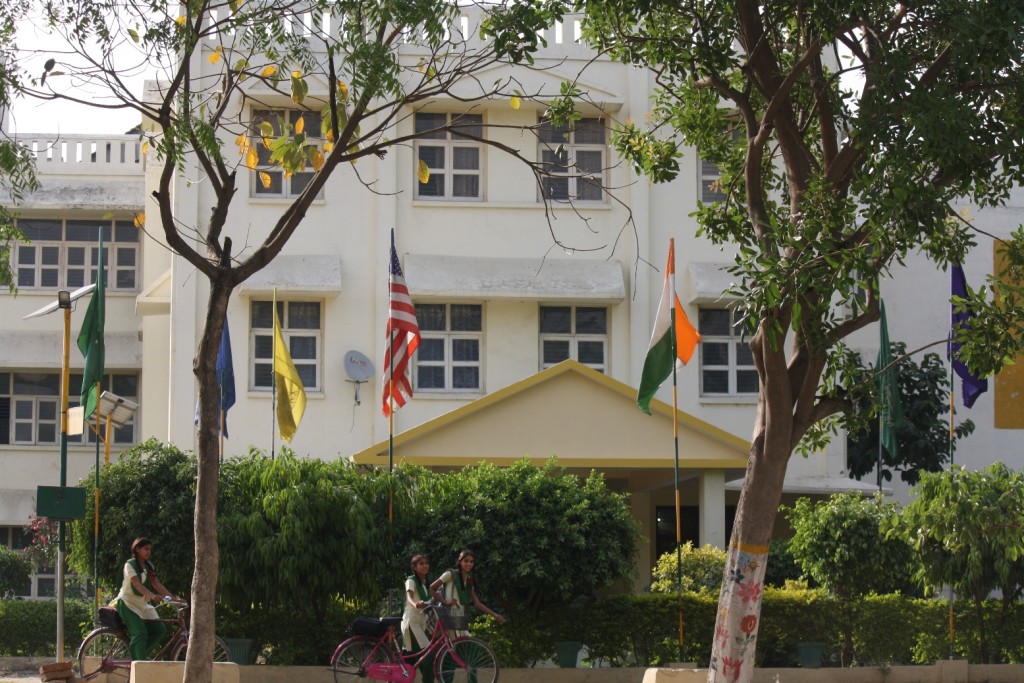 School girls on their way out

The school has not only brought about employment of girls in Yoga and meditation, nursing, hotel management, computer engineering and teaching streams but has also ensured that they have a say in choosing their life partners and promote the causes of family planning, gender equality and human rights.

It has added value to girl child in Anoopshahr, the 196-village strong sub-division in Bulandshahr.

“Today 85 of our daughters are working in different cities. 45 are into higher education and 42 more will join them this year,”

says Sam, founder of the school.

Considering that dropout rate was abnormally high 15 years back, initially the school paid Rs. 10 to every girl enrolled in the school. Yet only 14 out of the 45 students passed out in the first batch.

In 2006 after the dropout rate went down substantially the school decided to limit the dole payment to students above class V.

Also in 2013, the school decided to cut down by half financing of higher education of the students. It instead arranges for 50 per cent finance from banks and financial institutions. The girls can pay off the amount once they get into a job.

In 2013, Pardada Pardadi School adopted another girls school in Jatari Village of Aligarh and has since then been making arrangements for higher education of its students as well.

Apart from paying for attendance and arranging books, uniforms and conveyance etc. the school has appointed three counselors who visit villages to convince parents against withdrawing their daughters from the school.

“When a girl abstains for three consecutive days without information we visit her parents and try to find out the reason. Our effort is directed to ensure that the girl does not drop out,”

says Asha flanked by her husband Dalchand who works with her. 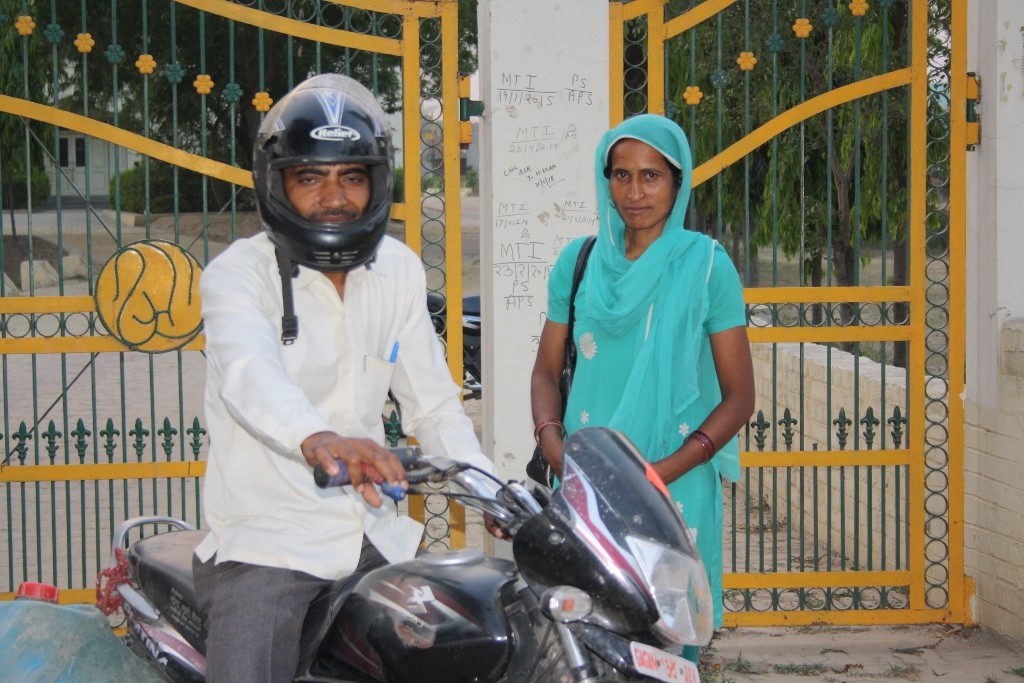 Choosing husbands, saying no to parda(veil)

Asha, who was part of the first batch of students which graduated from the school, had the distinction of seeing her husband.

“I called him to the school and approved him,”

the mother of two sons, who is currently planning to contest for Panchayat head in her in-laws’ village, recounts.

Asha has inspired many women in her village to say goodbye to gunghat (veil).

“20 per cent housewives have stopped using veil since Asha came to my place,” 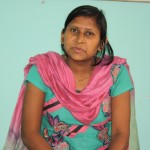 Priti Chauhan, a batch mate of Asha, who works as Administrative Assistant in the school, is proud that she inspired over a dozen admissions from her village, situated about five km from Anoopshahr.

“Initially I and my sister were the only ones. Later 15 more girls got admitted. One of my village girls is studying in Bangalore today,”

Priti, a post graduate in education, has a daughter. Her sister has done nursing course from Kailash Hospital in Noida. She zooms around on her bike and cannot even think of covering her face.

Girls going for higher education – courses in computer engineering, yoga, hotel management, sports teacher training and nursing – are upbeat that they will be financially independent. They are confident of choosing the course of rest of their life.

“We are equals. I have learnt to respect and taking care of myself. I will do what I want,”

says Rita, who is all set to leave for USA to study computer engineering in a university there. She cleared Test of English and International Communication to be eligible for the course.

Rita’s batch mate, Sarita Sagar (18), wants to ensure that she does not draw less than her male colleagues in the job. She is leaving for a course in Bangalore-based Nettur Technical Training Foundation (NTTF), an institute run in Indo-Swiss collaboration.

The school has built 90 toilets in various villages of Anupshahr Sub-division in last four years.  18 such toilets have been constructed in Karanpur, a village nearby. 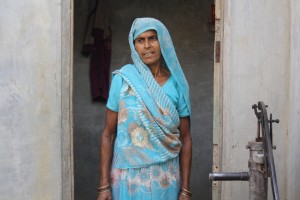 Ramvati standing next to the toilet built by PPES

Ramvati, a housewife, is proud that her daughters are not only taking care of household expenses but have also helped her overcome open defecation.

One of Ramvati’s daughters is working in a call centre, managed by the PPES, while the other is studying in the school.

“My daughter is my sustenance. She earns us meals,”

The school has also constructed a toilet in home of Manisha, an orphan (she lost her parents in an accident) and class VI student who stays with her blind grandmother in Karanpur. 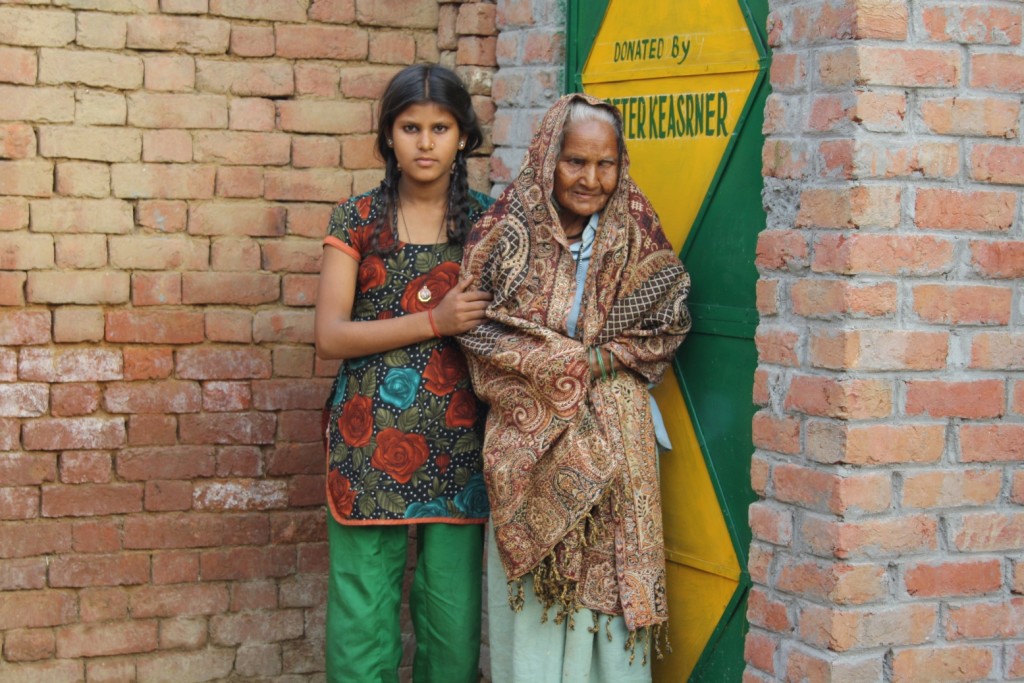 Maneesha, an orphaned class VIth student, with her grandmother outside toilet built by her school

Besides building toilets in individual households, the school has also built a community toilet in Madaar Gate, a lower caste settlement which is into sex work in Anoopshahr on the banks of Ganges.

Over 150 families are part of a toilet club formed by users and facilitated by the PPES. The community toilet complex also has facility for recharging of solar lanterns the society has gifted to the families. 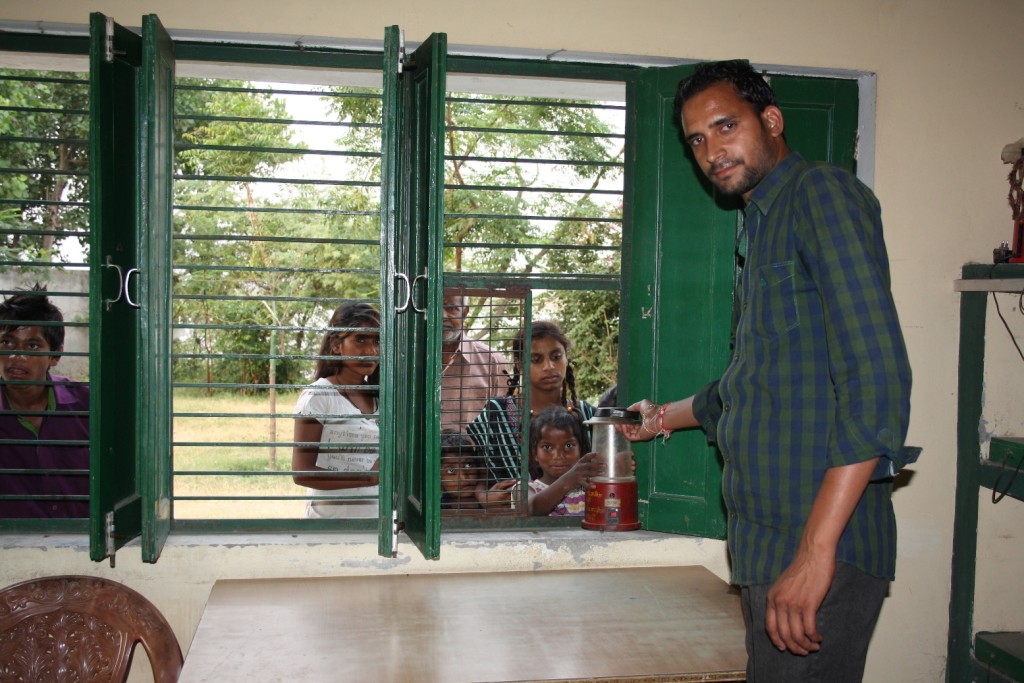 The society has 150 donors including Earnst & Young, Airtel, Axis Bank Foundation, DuPont India, Pakhar Foundation and DLF Foundation.Each donor finances education of 1 to 20 girls (Rs. 25000 per year is supposed to be the expanses on a student).

Apart from running the school, the society does community development through Self Help Group (SHGs), works on economic empowerment and health & hygiene of women.

Sam, who is originally from a feudal family in Bicchaula village in Bulandshahr, says he decided to set up the school because he was tired of reading and watching pictures of poverty and deprivation in India. 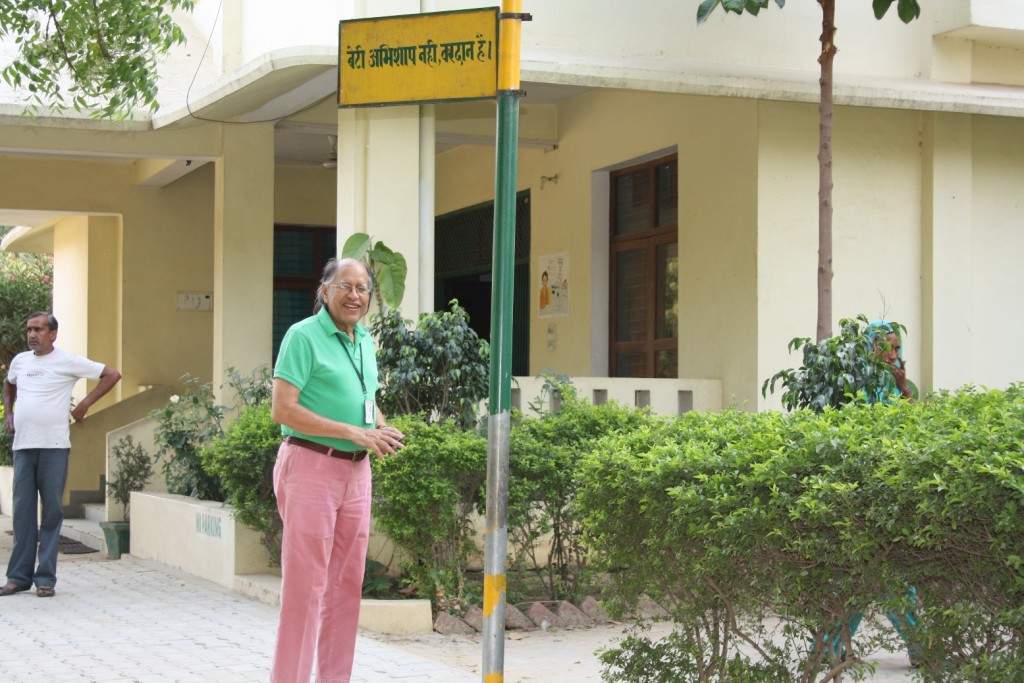 Sam standing outside the lobby

He decided to return and pursue his dream of doing something for his country after his two daughters got employed in USA.

Sam did not want to hear from his grandchildren (children of his daughters),

“What the hell did grandpa do apart from giving lectures.”

He expects his elder daughter Renu to return in 2024 and get involved in the running of society.

Previous: Counting On Girl Power For Good Governance
Next: Bin Laden documents: What’s in them?