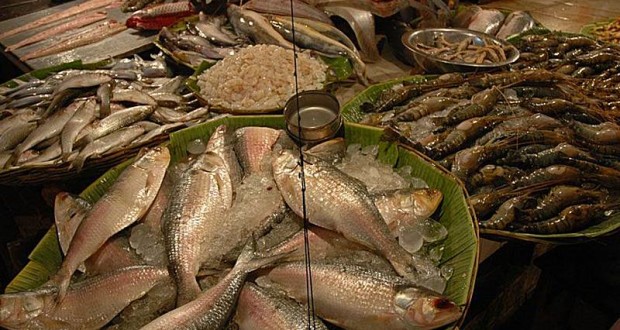 Going to buy fish today? If you are living in India’s West Bengal state, where fish is a daily staple for millions of people whether rich or poor, beware! More than one study has pointed to the alarming levels of mercury in fish, way above permissible limits and posing a grave danger to health.

And no matter how much you crave them, avoid katla (Catla catla), bhetki (Lates calcarifer), chital (Chitala chitala), pabda (Ompok pabda) and tangra (Mystus aor) fish, whether they are steamed or fried, dry or in a curry.

In the state capital Kolkata’s popular Gariahat market, for instance, samples of katla, chital and pabda fish showed that mercury concentration was twice as high as prescribed standards.

This has been known for years, as have the dangers of mercury exposure, such as neurological disorders and impaired IQ levels. But there has been little action.

Six years ago, in 2009, two NGOs, Toxics Link (New Delhi) and Disha (Kolkata), studied 60 samples of fish and various varieties of crabs from markets across Kolkata and 204 samples from the Ganga at Farakka, Damodar and Jharkali in the state as well as from water bodies of the East Kolkata Wetlands. The results were alarming.

The percentage of methyl mercury in the samples was found to be 70-500% higher than the limit set by the Joint Food and Agriculture Organization (FAO)/World Health Organization (WHO) expert committee on food additives and the Prevention of Food Adulteration Act and Rules, 1954.

The joint FAO-WHO committee recommended that the methyl mercury Provisional Tolerable Weekly Intake (PTWI) be taken as the standard: 1.6 μg/kg (microgram per kilogram) of body weight of an individual per week or 0.228571 μg/kg of body weight/day.

In 2012, another study based on samples collected from the Ganga in West Bengal by M. Pal, S. Ghosh, M. Mukhopadhyay and M. Ghosh of the University College of Science & Technology, University of Calcutta, found a strong positive correlation between mercury levels in muscle with food habits and fish length (age).

Contamination in katla, mottled eel (Anguilla bengalensis bengalensis), chital, rita (Rita rita) and pabda was above the 0.25 μg Hg/g of wet weight, the limit set by the PFA for the maximum level for consumption of fish exposed to methyl mercury. In bhetki and tangra, the levels were threatening.

The 2009 study by Toxics Link and Disha was given to the West Bengal Pollution Control Board (WBPCB).

Six years on, no local level remediation programme has been initiated. In 2010, as a response to the study, Biswajit Mukherjee, senior law officer, WBPCB, had said the Central Pollution Control Board (CPCB) had set 2012 as deadline for two factories – Durgapur Chemicals and Hindustan Heavy Chemicals – to replace mercury or treat the chemical waste they release.

The official has changed but the answer remains the same.

The factories continue to spew poison into the water. Recently, when the WBPCB chairman Kalyan Rudra was asked about any initiative by the board to check mercury contamination in the state, he said he would check previous reports and find out.

A copy of the study was also sent to the United Nation Environment Programme (UNEP). In 2013, more than 140 nations agreed to a treaty to limit mercury emissions and releases. The Minamata Convention— named after Minamata city that witnessed one of the worst incidents of industrial poisoning by mercury, which killed hundreds and disabled thousands of people in the 1950s and 60s —required its signatory nations to phase out the use of mercury in certain types of batteries, fluorescent lamps, and soaps and cosmetics by 2020. India signed the treaty in 2014, a year after the adoption of the Convention.

Fish absorb methyl mercury from water as it passes over the gills and they feed on aquatic organisms. Cooking does not reduce the methyl mercury content of the fish.

“Mercury can cause manic depressive tendencies and irritation, among other ailments. It affects brain, nervous system and most importantly the womb. Babies with less body weight are most vulnerable to its ill effects and can be born with physical and mental disorder,”

said Shantanu Chakraborty of Disha who conducted the study with Toxic Link’s Abhay Kumar. The FDA recommends that women who are pregnant, or may become pregnant, should avoid fish that may contain unsafe levels of methyl mercury.

The problem gets worse since many local doctors do not know that environmental pollutants can cause such diseases.

“If there is an ailment because of mercury, doctors would give symptomatic treatment to the patient. Presence of mercury in body can be detected by conducting hair or blood test. But I have rarely come across anybody who has undergone such a test. But, we have thousands of babies born with mental disorder and people with neurological problem nowadays,”

Mercury can also bring down IQ-level in children.

“The government of India has no policy for diagnostic and therapy of ailments caused by environmental pollution. We had conducted the study only in West Bengal, but the contamination may be much higher in other states if studied,”

As part of the Ganga delta, West Bengal gets not only the contaminants from its own factories, but also from those upstream.

Uttar Pradesh has 687 factories categorized as grossly polluting industries (GPI) by the CPCB. Mostly tanneries, sugar mills, paper mills and chemical industries, they spew 270 mld (million litres per day) of untreated wastewater into the Ganga. Water pollution in the states between Uttar Pradesh and West Bengal – Bihar and Jharkhand – is just as bad.

“It is unlikely that mercury has reached critical level because in West Bengal influx of sea tide dilutes the contamination in the rivers in the southern part of the state.”

Previous: Why we should weep for the sparrow
Next: AAP’s internal rift: Utopia vs Real Politics