Home > Environment > Why we should weep for the sparrow 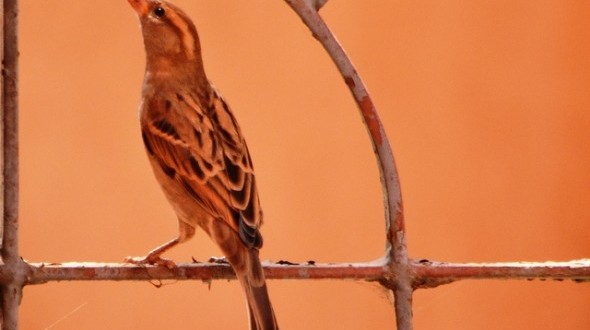 Why we should weep for the sparrow

Did you celebrate World Sparrow Day on 20 March?  It bothers me when I read that these birds are becoming extinct in Indian cities. Chirpy, cheeky little sparrows were part of our life, growing up as children in a dilapidated Kolkata flat.

They nested high up in an old-fashioned ventilator. And caused us kids some heartbreak when the babies fell down or when one flew into the whirling ceiling fan and was injured. We’d try to save the babies, placing them tenderly in a cardboard shoe-box padded with soft rags or cottonwool. Invariably they died. And if they survived, they were rejected by the clan because human handling had made them suspect. Or so we were told.

As the sparrow project websites point out, everyone weeps for the tiger, the rhino and the elephant. Not many people know, though, that the humble house sparrow is endangered.

So it is heart-warming to read about the attempts in different parts of the world to bring them back. In several Indian cities, there are groups of sparrow lovers, working to spread the message about the threats to the species and to engage families to start little colonies on their verandahs and balconies. An art project was launched to save the sparrow, too.

I learnt a lot on World Sparrow Day, reading up fascinating house-sparrow reports on the internet.

Apparently, modern Indian cities are not avian friendly. Old houses had crevices, ledges, porches, tiled roofs and high windows where sparrows could rest and nest. Our new glass and concrete, Dubai-Singapore-like structures have nowhere for a bird to perch, leave alone nest. Often birds fly into the glass surfaces and kill themselves, inadvertently.

Also a few decades ago, even city people sat on their verandahs, in courtyards or in doorways cleaning rice and wheat. The chaff and broken grains provided bird food. Now we buy polythene-packed, cleaned convenience grains. Good for harried householders. Bad for birds. Pesticides and chemical sprays apparently cause massive avian poisoning, being especially life-threatening for the nestlings.

The average life span of a house sparrow is around 3 years in the wild. But the oldest recorded house sparrow was 15 years 9 months old. Another report talks about a captive house sparrow living for 23 years.

The rediff.com website offered this astonishing information. It also noted that a subsequent Chinese famine was in part caused by the elimination of sparrows, which naturally prey on a variety of insects harmful to crops. According to the report, Mao Zedong held rats, flies, mosquitoes and sparrows responsible for the failure of the 1957 grain harvest. He ordered the massacre of 1.96 billion sparrows between March and November 1958, despite the objection of experts that sparrows were in fact the major defence of the grain fields against insects.

The killing culminated on 13 December 1958, when Shanghai residents reportedly destroyed 194,432 sparrows. Encouraging children to go on a bird-killing spree may also have had a dreadful effect on their sensitivity and naturally gentle instincts.

Not a pretty piece to read. It was, therefore, a huge relief to follow the efforts of a small organization, the Nature Forever Society, founded by Mohammed Dilawar, which is spearheading a movement to save the Indian house sparrow in Mumbai. Dilawar became fascinated by the sparrow in Britain and returned to pioneer an urban movement. Enthusiastic volunteers provide information, support and fairly inexpensive nesting boxes and feeders to sparrow lovers. That, apparently, is all it takes.

The movement has spread across several Indian cities, with fairly good television and newspaper coverage on the decline and reappearance of the Indian sparrow. School kids, too, have been roped in to the campaign.

I am excited and delighted whenever I spot a sparrow family. I was utterly captivated by the unusual sight of a couple of sparrows flitting between the tables of the Bangalore airport food court, picking up crumbs dropped by diners. Most passengers were, too. And as I read through the various reports, childhood memories of the friendly, endearing little birds flooded back. Good memories to have. And memories that I hope future generations of children can also enjoy.

Previous: A voice from the hearts of brothels..
Next: No action as mercury still poisons fish in West Bengal