A child from Afghanistan getting treated in India. Tens of thousands of Afghans are travelling to India for safe, albeit expensive, medical care. Photo: Bioedge

New Delhi:  Ashurov Saidkul John has a dream.  A gastroenterologist from Tajikistan, John wishes to replicate Medanta, The Medicity, a high-end private hospital of Gurgaon, in Dushanbe, the national capital of Tajikistan.

“We do not have good angiography machines. (And) we don’t have good private hospitals like Medanta in Dushanbe. I want to open one,”

he said in an interview with Point Blank 7 before leaving Gurgaon.

John underwent bypass surgery and spent close to 20 days in Medanta along with his son Bakhtiar.

He was recommended to the Gurgaon hospital by an Indian doctor from Ahmedabad who visited Dushanbe in February this year to see patients there. He faced difficulty in breathing because three main arteries of his heart were blocked.

There are thousands of foreigners who come to Medanta and tens of thousands who come every year to avail of quality health care which is available at reasonable cost in five star hospitals in Delhi, Gurgaon, Noida, Bangalore, Hyderabad, Chennai and Mumbai every year.

Medanta alone, according to Navneet Malhotra, Senior Vice President, who heads international patient department in the hospital, gets at least a few thousand patients from overseas every month from Africa, SAARC (South Asia Association for Regional Cooperation), Commonwealth of Independent States (CIS), and European countries for its OPD and IPD. These patients come on short term medical and tourist visas for treatment and surgeries related to heart, cancer, bone & Joint and neuro, liver and kidney transplants and plastic reconstructions.

“Though no government agencies keep track of number my guess is 50,000 such patients come to India every year from overseas. The biggest contributors to our foreign exchange are SAARC countries followed by Iraq, Oman, Africa, CIS countries and Indonesia,”

says Pradeep Thukral, head of SafeMed, a private agency which facilitates treatment of people from abroad in India. Besides the cost factor, what brings foreigners in hordes to India is the quality of doctors and paramedical staff, no waiting time in five star hospitals, language proficiency of Indians and availability of whole eco system (pharmaceuticals, doctors, software, equipments) under one roof.

Alain Younger, a youth from Kinshasa state in Congo, who is awaiting kidney transplant in Max Healthcare in Saket, vouches for it. Younger was treated for cardiac complications back home. It was only after his arrival in Max that he got to know about damage to his kidney.

“Alain actually came to India in November last year to consult a cardiologist. Here he got to know that his damaged kidney was the cause of his illness,”

says Benedict, a computer engineering student from Congo, who plays interpreter for Alain.

Alain will soon be getting a kidney from his younger brother Pitshou. He is currently putting up in a guest house in South Delhi. Treatment in Delhi, he says, will be four times cheaper than South Africa and Europe. He is very impressed with healthcare facilities available in Max Saket.

“The precision and quality of Indian doctors is good,” 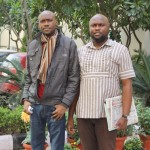 Kalu (left) with his brother Martin in Max

Kalu Ogbogu (31), who arrived from Nigeria on January 20 and is waiting for kidney transplant in Max, also vows for quality of medical care available in India and lack of such quality in Nigerian cities.

Kalu, who has come with his elder brothers Frank and Martin, has taken a three bedroom flat on rent near the hospital.

“I was operated four times in Nigeria but still have problem with both my kidneys,” 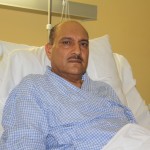 Akhtar Ali (56), a government servant from Muscat (Oman) who got operated for tumour in Medanta, is even more direct: “We do not have good doctors back home.”

India was believed to have earned $ 78.2 billion from medical tourism in 2012.

The sector, according to Deep Goel, Director Bariatric and Laparoscopy Surgery in BLK, a super specialty hospital in Western Delhi, is growing at 25 per cent annually.It is expected to fetch $ 158.2 billion to the country in 2017.

Apart from Max and Medanta, the Medicity, Apollo, Fortis, Narayana Health group Bangalore and some standalone super specialties are getting large number of patients from overseas. In particular Fortis and Medanta in Gurgaon, Max Healthcare, Apollo Indraprastha, BLK and Escorts in Delhi, according to industry experts, are getting over 20 per cent of their business from abroad. There are also some nature care institutions, yoga, Ayurveda and meditation centres which attract large foreign crowds.

Many of the hospitals have set up their networks or travel desks abroad to attract foreign patients. Max, which has a dozen health care institutes in the country, for instance, already has network in Tashkent, Kabul (Afghanistan) and Nairobi (Kenya) and is planning to open more.

A few of them also have tie ups with medical travel operators. There are others who organize OPD (Outpatient Department) in foreign shores. Also a few of the Indian hospital chains like Fortis and Max Healthcare have entered into joint ventures with foreign healthcare institutes.

According to Anas Abdul Wajid, Director sales & Marketing in Max Healthcare, there are around a dozen medical tour operators in India who are working to get patients from overseas. All hospitals dealing with foreign patients have language interpreters on board. Some of them even have uplinked with foreign television channels for the benefit of their guests from abroad.

India provides visa-on-arrival to nationals from 43 countries. Apart from this, the government also issues short term Medical Visas (called M Visa). The nationals of Oman, Kenya, Fiji, Myanmar, Cambodia and Indonesia have benefitted from the visa-on-arrival.

Recently, Prime Minister Narendra Modi announced that the facility would soon be extended to Sri Lankans. Thukral hopes the decision will bring in more patients from the island nation to Chennai. Indian Government plans to extend visa-on-arrival to over 150 countries in next few years.

Medical tourism stakeholders want the visa-on-arrival for African and SAARC countries like Nigeria and Bangladesh as well. They also want Indian Government to ease the grant of visas to foreign patients. They want Indian embassies to stop interviewing patients for visas.

“Remember they are very anxious and are going under knife. Facilitation for them should be made easier,”

Confederation of Indian Industries (CII) wants industry status for healthcare so that hospitals have access to funds from banks and other financial institutions. The stakeholders want the central government to promote medical tourism the way it promotes sightseeing, pilgrimage and heritage tourisms.  They wish the medical tourism was not unorganized and limited to a host of private players.

“The country needs to be promoted as a medical travel designation. There should be a body to showcase it,”

Surprisingly, the private players do not want government hospitals to enter the business. They feel the public sector institutions will not be able to cope with the pressure. They would rather want them to cater to Indians alone.

“They have been raised with public money. Let them serve the public,”

Another irony is that though provision of healthcare for foreign patients is known as medical tourism it does not involve too many organized travel agencies.

There is hardly any collaboration between hospitals, general tour operators and hotels. Though guest houses, serviced apartments and taxi operators have mushroomed around hospitals like Medanta and Max Healthcare to make it easier for foreign patients to get post operative care they do not work in partnership with the hospitals.

“There is no tourism in it. The name is quite a misnomer,”

A CII-KPMG study on medical tourism in 2014 put India at third spot in Asia preceded by Singapore and Thailand. Bangkok’s night life is undoubtedly one of the reasons why Thailand bags top position while Singapore’s reputation on cleanliness places it at number two slot. Unfortunately, though hospitals catering to overseas patients maintain high standards of cleanliness and hygiene their surroundings and overall littering in Indian cities leave a lot to be desired.

Previous: DK Ravi : When honesty and integrity is silenced by political might
Next: Let’s salute those who are doing something positive