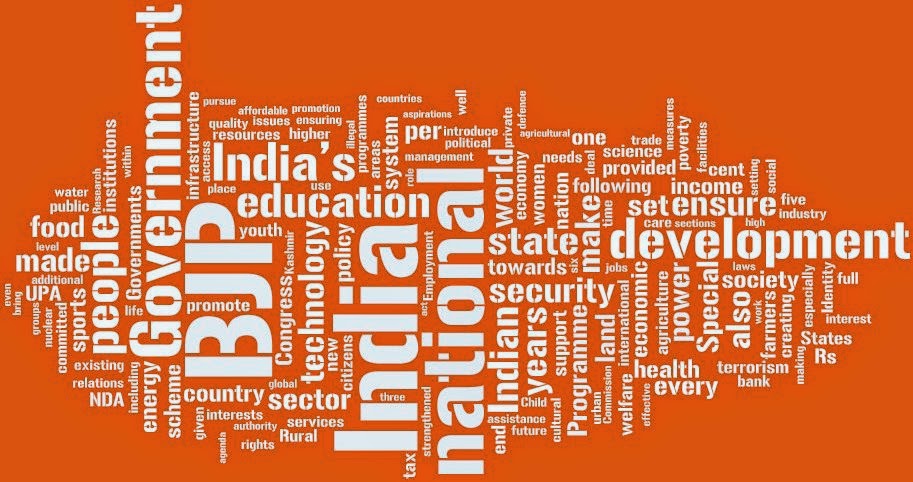 The jargon-laden manifesto released by the BJP, in many ways, confounds rather than clarifies. A victory for BJP would just go to prove that the more strategic noise you make, the less there is a need for workable plans.

The long wait for the master-plan of development ended recently with the release of the BJP manifesto- setting off a trend on every available media platform. The barrage of boos and hurrahs that accompanied the release was expected, but the arguments were once again lost amidst inflated words.

“Empowerment”, “good governance”, “development” and “accountability”; words that seem to mean a lot but say little, that seem to have become a part of every politico-public interaction with the sole purpose of presenting an aggrandized version of India; a strategy, that no major political entity can be absolved of using to outline grand visions for India as well as launch attacks on every perceived political foe.
The ongoing communal polarisation of the elections this year and the release of the latest state-wise development indicators by the Planning Commission have, if anything, has only raised the importance of the manifesto in the face of critical questions posed to BJP and Narendra Modi.
As favourites to dethrone the current Congress-led government, the BJP have unabashedly employed, through an impressive army of dedicated foot-soldiers and social-media ‘Modiwads’, a slew of managerial and developmental buzzwords in places more than one, without indicating any plan of action.

With 74 instances of the usage of the word “development” and 34 instances of “governance” , almost every section of the BJP manifesto begins with a Congress-bashing and proceeds along to give us a massive collection of plebeian-ised management talk which evidently seems inspired by major international funding agencies of the last decade who aimed at formulating inclusive policy reforms.

“We will also encourage the bureaucracy to take right decisions, and contribute their might in building a modern India”

The manifesto is punctuated with many such unexplained schemes and terminology with some sections as unclear and persuasive as the Blob.

not only adds to the rich vernacular vocabulary, but also adds the edge of puritan idealistic machismo without a hint of clarity. The end product seems truly a summary of a Grand India bustling with potential that the BJP is out to tap.

An ardent believer of Modi-nomics told me recently, “We have effectively laid out our vision, our manifesto will translate this vision into a blueprint for a truly ‘suvarnabharat’”.

Clearly “India Shining” of 2004 has been replaced by “India First” this time round – an idea that has been advocated in principle by the constitution; a vision that seems unconstrained by realities.

The BJP, though, must deserve some credit for using their imagination and inventing new terms such as People-public-private partnership (PPPP) without going into exploring the difference between the current public-private partnership (PPP) and for expanding the scope of existing jargon with innovative verbal catenation. It is difficult to match the creativity involved in formulating and formalising terms like Ayurgenomics and  Rurban.

There are several gaping holes in the BJP manifesto that beg to be analysed especially regarding issues of contention.

Jammu and Kashmir, for instance, warranted less than half a page in the manifesto despite the contentious nature of the BJP’s long-standing support for the abrogation of Article 370.

Despite the fact that

“the return of Kashmiri Pandits to the land of their ancestors with full dignity, security and assured livelihood will figure high on the BJP’s agenda,”

there is no trace of an outline for such a return migration which could potentially impact the nation’s relationship with the northern state.

The issue of food security, although highlighted as superlatively important, fails to be addressed in any fashion that could be interpreted as a plan of action. Considering India’s pathetic performance in hunger alleviation, there needs to be greater elaboration than simply

There is no mention of what such an undertaking would imply or which models are considered successful.

There is a similar ambivalence when dealing with SCs, STs, OBCs and other weak sections of the society. The usual rehashing of BJPs commitment to “empowering” and “enabling” weaker sections is left unsupported as there is no clarification of how BJPs agenda differs from policies already in action.

Even as the dark clouds of the post-Godhra riots in Gujarat hang over the horizon, the manifesto almost completely skirts the issue of BJP’s commitment towards minorities and Muslims in particular. The plan for engagement of weaker sections is obscure at best and while the BJP has promised to

“Ensure a peaceful and secure environment, where there is no place for either the perpetrators or exploiters of fear”

there is no mention of what this means for their own Hindutva roots despite the increasing evidence of  “saffron terror”.

There is no clear indication of the kind of secularism that BJP proposes in its outline for cooperation with all faiths or how the BJP plans to accommodate its own Right-wing ideology of Hindutva. An example of this inherent conflict of interest lies in its

The section on cultural heritage printed on the last page is also indicative of the BJP’s Hindu leanings.

The BJP agenda regarding women’s welfare has been put down in 23 points stretched over two pages.
While seemingly elaborate, this list can actually be read as a list of the problems faced by the women in India today the BJP has recognised. The only point with any real specificity is BJP’s commitment to 33 per cent reservation for women in the parliament.

Riddled with unclear schemes, confounding terminology and superlative descriptions, much of the manifesto offers a dead-end post a preliminary enquiry and the possible implications need to be questioned further before anointing any candidate the “chosen one”.

Although the BJP manifesto is by and large a compilation of the choicest bits of technocratic mumbo-jumbo, credit must be given where it is due.

Two clear beliefs of the party are manifest- an unrelenting belief in information technology and industrialization.

The BJP’s commitment to information technology as a tool of “empowerment” is evident throughout the document and a plan for “connecting” the interiors of country the high-speed internet has been put forth with detailing that escapes most of the other features of the BJPs overall agenda.

The economic plan released by the BJP is centred on industry and manufacturing and the prescription includes “conducive” business environment with fewer “red-tape” procedures. While this in itself might be a refreshing change for many in the country, such a reform could have a disastrous impact on the social and environmental ecology of the country.

There isn’t an elaboration on how a balance is proposed to be struck or what environmental and social reforms will accompany such a change beyond that the BJP promises to be environmentally and socially conscientious.

At the end of the document, one does not come away with confidence in the party. One comes away mainly with a painful jargon-embedded description of reality and an antithetical vision unrestrained by reality. There is no acknowledgement of the contradictions inherent in many of the proposed agenda priorities.

Several questions need to be asked about BJP’s intent on education, agriculture, employment, housing and health.

How are the schemes being proposed different from existing schemes? What do these entail? The delay in releasing the document has effectively derailed this process of critical examination and unhindered use of rhetoric has drowned out any comprehensible political argument made in the public sphere.

As the country goes to polls over the next month, one can only hope that Indian masses can learn to read between the lines and make an informed choice, based not entirely on rhetoric but on concrete plans and ideological certainties. Elections run and won on rhetoric will inevitably cause disillusionment and failure.