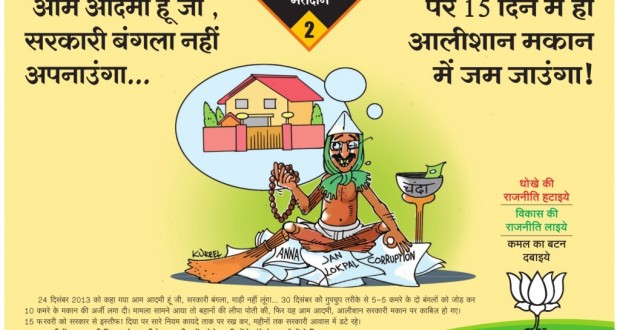 New Delhi : While political parties spend crores in promoting their candidates in run-up to elections, most rely heavily on negative campaigning and slinging mud at the opposition. And this only increases with each passing election season.

Mudslinging in elections has been increasing with every passing election and the media plays along with the political parties. Since power at all cost is the objective, political parties are happy to indulge in it.

Misra added that the overuse of negative strategies has sowed suspicion in the minds of the general public and also among the supporters of the rival party.

The main targets are the people sitting on the fence and gullible voters who cannot tell fiction from fact,

“The parties are constantly putting each other down and for the general population it is very confusing if one is not convinced about any one candidate,”

This was evident at the Aam Aadmi Party (AAP) chief’s rally at Malviya Nagar in south Delhi last week. Taking pot shots at the current government, AAP chief Arvind Kejriwal not only criticised the power shortage in the region, but also called it a government of thieves.

How will the cost of electricity go down if your government is in debt of the ones who sell electricity? How will you see good days if your chosen government itself is a thief?”

The chief ministerial aspirant followed up his retort by coaxing those gathered to accept money being given out by Bharatiya Janata Party (BJP) and the Congress to “buy votes” and then vote for AAP instead on February 7.

Opponents trying to “buy” our volunteers. I have told volunteers not to refuse anyone who approach.Paise lekar sting kar lo. Spread this msg

The incident was noted by the Election Commission and Kejriwal was issued his third notice by the electoral watchdog on January 27 despite the first two warnings having fallen on deaf ears.

Although Kejriwal’s allegations drew the ire of the Election Commission (EC), by no means was his rhetoric the only instance of negativity in an electoral race that is rapidly heating up.

Since Prime Minister Narendra Modi called the AAP leader a “naxalite” in his address last month, the barbs from both sides have been coming thick and fast. The party high command promptly recruited and fielded the “iron lady of India” Kiran Bedi to prop up a fledgling state unit.

Until then the BJP had relied on the charisma of the PM to woo voters as it had done in the four states that have had assembly elections since the party came to power at the centre last year.

The introduction of Kiran Bedi among the BJP ranks has marked a change in the party’s strategy to tackle the Delhi polls and Bedi has been unequivocally projected as the star campaigner despite murmurs of dissatisfaction from within the state unit of the BJP. The intensity of verbal assaults, though, have only increased since and the personal discord between the two candidates has come to the fore.

While rallies and roadshows have been the primary stage for direct attacks and allegations, radio jingles this time round have also been especially provocative with both BJP and AAP resorting to an incendiary duel over the air-waves even as the Delhi police stepped in to stop airing an AAP jingle they deemed defamatory to the force.

The provocative line was continued on Thursday at an address to BJP workers and voters at the party state unit office on Pt. Pant Marg where Kiran Bedi gave an appearance (she did not speak since she is suffering from a sore throat). State party president Satish Upadhyay and Rajya Sabha MP from Madhya Pradesh Prabhat Jha led the attack on Arvind Kejriwal by calling him a liar and a “dhokebaaz” (betrayer) while Kejriwal’s former ally, Bedi, nodded silently in passive agreement.

This time however, even the newspaper ads have not been spared. They have become “weapons” for the opposing parties. Irked by BJP’s latest anti-AAP newspaper ad that allegedly mocks his caste, Arvind Kejriwal vehemently expressed his displeasure seeking an apology from the opposition and has threatened to take it up with the EC. 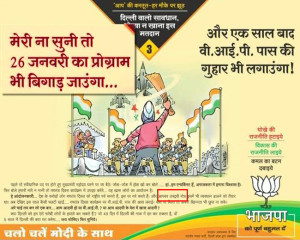 Meanwhile AAP leader Ashutosh was not far behind with his comments on the ad. He tweeted,

BJP stooped another low. Now it has attacked Kejriwal’s GOTRA in today’s advertisement.People belonging to his GOTRA will teach BJP Lesson.

The result of this aggressively negative strategy has been an overshadowing of the agendas of contesting parties, in short, what elections should actually be about. Although both parties have leaned on women’s safety, electricity and water to make their promises, the rhetoric on display has been dominated to a large extent by slander. 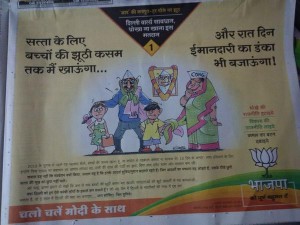 According to the head of the Centre for Policy Alternatives, Mohan Guruswamy,

“The dependence on negativity has stemmed from the short time that the parties have campaigned. It is difficult to sell an agenda in a short while but it is easier to put other candidates down.”

Guruswamy adds that the lack of a vision based on the needs of the local population has forced the contesting parties to take a more sensational but negative stand when it comes to campaigning and propaganda.

Despite the loud negativity surrounding the election campaigns, unsurprisingly, neither party is ready to take responsibility for the rabble-rousing and provocative rhetoric.

“We have never resorted to these dirty tactics of slandering the opponent. We have only told the truth but the media is trying to distort the facts and present a biased view,”

He, however, added that the BJP is trying to split the country with identity politics and buy it with ill-gotten wealth.

On the other side of the battle-line, former Madhya Pradesh BJP unit president Prabhat Jha blamed the ebb and flow of political campaigning for the negativity surrounding it.

To compete in politics, we must match others’ strategy to defeat them. As the wind blows, so we shall have to bend,

said Jha when asked about the negativity surrounding the poll campaigns.

The opinion polls released so far by different media houses have failed to declare a clear front runner and results have been ambiguous but as the race heats up Delhi’s two main contenders seem less like political outfits and more like rowdy children fighting over a shiny new toy.