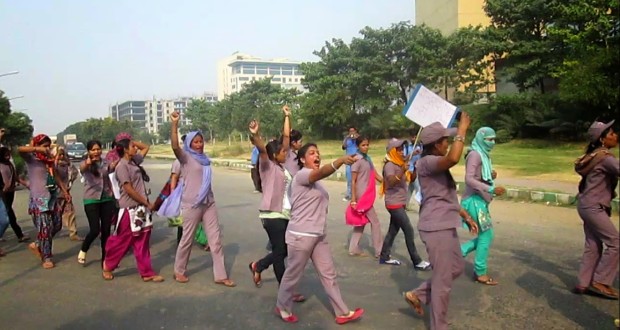 
In the past few years thousands of workers in the Gurgaon-Manesar industrial belt 20km southwest of the capital have been engaging in near continuous struggle against exploitation, unequal employment practices and the right to collective assembly.

While politicians in Delhi push through legislation which seek to further entrench labour precarity, a predominantly casualised workforce are fighting back without leaders or union support.

Gurgaon-Manesar, an important industrial hub holding the third largest automobile factory in the world, is also one of India’s first cities to have been planned and developed almost completely by the private sector.

In a pioneering license system the state government in the 1980s allowed private developers and government agencies to buy up land directly from farmers at “market rates”. What resulted was a patchwork of deregulated, privately managed spaces of luxury private condominiums, malls, golf courses, and urban villages housing the thousands of industrial workers for the cities’ “industrial townships”.

Manesar is one such “township”. Employing over 150,000 workers, the town forms part of a string of these in the Delhi-Mumbai Industrial corridor, conceived of as rationalised, deregulated areas – at arms-length from the politicised environments of existing cities and therefore attractive to foreign and domestic industrialists, thanks to the prodigious low wages, casualised contracts, forced over-time and unequal two-tier employment system (wherein only 20-35% of the workforce are afforded full pay, and representative collective bargaining rights).

ASTI Electronics India Ltd is a subsidiary of Asti Corp, Japan and produce wiring harness, switches, controllers, and other automotive and electronics parts. It supplies to other auto companies in Gurgaon-Manesar like Suzuki Motorcycles, Maruti Suzuki, Yamaha Motors, Omron Automotive.

On November 1, at ASTI electronics factory on the far edge of Manesar, management instructed  all contract workers (those majority employed via contractors and thus paid less for the same amount of work) to assemble in the canteen two minutes before the end of the shift. All permanent workers were to leave the factory immediately. Upon reaching the canteen, workers were met with a notice detailing their immediate dismissal due to low work demand.

“At first everyone was in complete shock”

a young worker tells me,

“people were fainting, it came as a surprise… then we approached the management and requested immediate reinstatement but they sent in the police and company security guards”,

who forcibly removed them from the premises fearing a factory occupation (the occupation of factories is a common tactic among workers in Gurgaon-Manesar, e.g. the Maruti-Suzuki struggle).

“We were told to collect our remaining wages from the contractor’s office in Gurgaon, but we refused”.

They demand their reinstatement, regularisation of their contracts and full back-pay. 80% of the ASTI workforce are female, earning between Rs.6-7000 (£60-70) a month, on 9 hour working days.

I have visited the ASTI protest camp a number of times over the past month, and have been struck each time by the great sense of empowerment among the overwhelmingly female workforce at the camp.

While the political culture of the Gurgaon-Manesar workforce remains overwhelmingly masculine, with a completely male trade union leadership, over recent months there has been a sharp increase in female workers taking the lead in industrial disputes, carrying out occupations, downing tools and other forms of agitation.

800 female workers of the nearby Jay Yushin autoparts factory have stopped production and struck work on a number of occasions these past few months in protest against workplace abuse, non-payment of wages, and intimidation. Their actions have thus far cost the company Rs. 60 million.

“Unlike many factories here ASTI mostly employs women in the day-shift, so there are many of us working together…Most of us are the sole breadwinners of our families. We need these jobs”

said Somel from Uttar Pradesh who has worked at the factory for 2 years. It is well known that the factories in Manesar are beginning to engage higher levels of female employment, taking advantage of the longer labour hours under the gendered division of labour with which women are internationally burdened.

The hope is that these women have even less time for organising, agitating, discussing and are more accustomed to subjugation. Indeed this logic is mirrored in the BJP’s proposed labour reforms, which extend the number of shifts women can legally work, without the provision of any additional safety or support measures.

The ASTI workers’ dismissal did not arise from nowhere. Earlier this year, both contract workers and permanent workers engaged in factory occupations and protests for the rights of all workers to form an independent factory union, and for all contract work (65% of workers are hired by third party contractors and thus paid less for the same work) to be regularised.

I was told the contract workers raised Rs. 4, 50,000 (£4600) to contribute to the Unions formation (or bribe). As a result of the strikes a union was formed, and yet the new union formed as a result of these actions is not formally supportive of the protests. All the permanent workers remain at work in the factory.

Thus the Asti struggle, like many other industrial actions taken over the past few months in Gurgaon-Manesar, are outside the purview of the central body of trade unions and not legally recognised.

To say the workers feel betrayed would be an understatement. Here the two-tier employment system shows its real power, a tool used by industrialists in coalition with the Indian state to fragment solidarity across the workforce and maintain the vast majority of its highly mobile workforce in conditions of severe legal precarity.

Amidst all this, 40km away in New Delhi, the BJP-led right wing coalition government is proposing (seemingly rarely applied) legislation to retract the protection of the country’s industrial workforce from unfair dismissal and arduous compulsory over-time.

Labour laws currently under review include the Factories Act 1948, Minimum Wages Act 1948, Apprentices Act 1961, Labour Laws Act 1988, Child Labour Act 1986 and include among others proposals to allow employers to dismiss more workers without government approval, to increase the legal maximum of working hours and continual working days, to increase the share of support needed to form a union.

While it is admirable and necessary for such “reforms” to be challenged, it is no secret that the existing labour laws are scantily implemented and at worst mystify workers’ rights and obligations to uphold them to the point at which employers can do what they want.

For example, while existing Contract Labour Law forbids contract workers (paid significantly less than their permanent colleagues) to carry out any core production work, this is patently not the case in factories in Manesar which employ around 70% of their workforce through contractors.

Meanwhile, the multiplicity of laws, only partially applicable to the majority of the non-permanently employed, together with the bureaucratisation of the disputes mechanism, place a stranglehold on worker organisations – such as unions – seeking to organise within the legal frameworks.

The ASTI struggle – like many others – demonstrates the crux of the problem with challenging India’s proposed labour reforms.

Of course the defence of labour and collective assembly rights so hard fought for by workers themselves is admirable and necessary. But they should not be seen as ends in themselves.

The example of ASTI and hundreds of other labour disputes in Gurgaon-Manesar and across India demonstrate the increasing obsolescence of legally registered unions which represent not only a minority of the workforce, but an entrenched two-tier employment structure that perpetuates the divisions of labour so central to its exploitation.

Back at ASTI, without the support of their union, protesting workers are building their own cross-factory networks with workers at other factories . At the end of their shifts, workers from nearby factories stop by the protest tent to show support.

Workers from other factories in Manesar such as Suzuki Powertrain, Suzuki Motorcycles, Autofit , Endurance Manesar, Baxter, Munjal Kiriu, Hero Honda take part in rallies at the factory gates and the offices of the labour commissioner. Money has been raised by other workers to keep the strike going.

Their efforts are not unnoticed. On December 9, the permanent workers inside the factory underwent a solidarity hunger strike and wore black headbands in protest at the treatment of the contract workers. After an altercation with a union member, the workers stopped production for a number of hours. Things can change very quickly in Manesar.

It is these solidarities, across factory and across contract which the factories and indeed Modi’s Government fear. Indeed it is these extra-legal, self-organising networks which have frequently brought capital accumulation in Manesar to a standstill over the past two years, with 30 large-scale strikes in 2014 alone, while in August of this year 20,000 workers illegally struck work in support of striking contract workers at Baxter Pharmaceuticals.

And it is these networks which must not be forgotten once the dust settles over the current round of labour “reforms”.

Below is an extensive coverage of the major events during the 13 days of the strike in the Maruti Suzuki Manesar factory near Gurgaon in 2011.

Previous: How technology is changing language and the way we think about the world
Next: Khurja Ceramics in India score over China