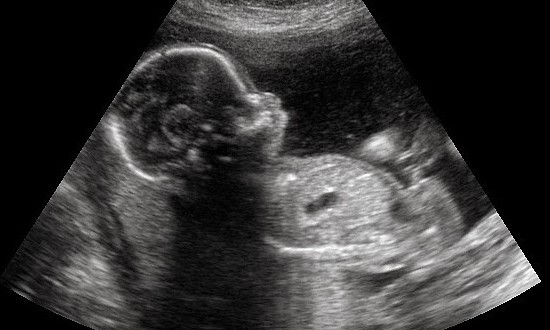 With abortion in India becoming an instrument of family planning and abortion laws being misused, there are myriad socio-cultural practices in India that has changed its course and the concept of abortion has taken on a different form.

Chennai: At a certain clinic in Thiruvanmiyur, an upmarket area of Chennai, “termination” can be done even for “full term pregnancies.” The building where abortions are conducted is a multi-speciality clinic, where middle class patients come in for all sorts of treatment.

“Abortions are performed even after 20 weeks of pregnancy,”

said the nurse at the counter encouraging the patient for immediate admission.

After the abortion of a full term pregnancy, the fate of the babies removed from the womb remains unknown.

What happens inside the illegal abortion clinics will never be known. There is an air of secrecy and the shady deals are struck in the corridors by enthusiastic nurses.

Earlier this month, Sunita (name changed on request), a domestic helper, 15 weeks pregnant and a mother of two could not afford the cost of an abortion in the city ( Rs 25,000 to Rs 30,000) and hence turned to a “local doctor” near her slum for help.The quack in the process of an abortion not only punctured her uterus but also damaged her intestines. She was rushed to a government hospital. Luckily she survived.

A former director of social obstetrics at Kasturba Gandhi Hospital for Women and Children (KGH), said that women from villages usually got their abortions done by untrained birth attendants .He mentioned cases he had handled, where neem sticks were introduced into the vagina to abort the foetus. The stick would rupture the uterus and other organs in the viscera.

“They visit us only when it is too late. By the time they come, many of them are beyond help,”

Why then do women refrain from approaching a hospital with legal abortion facilities?

The need for secrecy

Lack of privacy and confidentiality in government hospitals, high cost and lack of awareness are the prime reasons which drive women from the economically weaker sections, sex workers and young unmarried women to turn to illegal methods of abortions.

A visit to at least five different types of Medical Termination of Pregnancy (MTP) providers revealed that there are a wide range of services available across the city.

While government hospitals, family welfare centres, clinics run by NGOs like the Parivar Seva Santha (Marie Stopes clinic) enjoyed a legal status and were government approved, there were also a large number of privately run clinics with unqualified doctors (who were only MBBS with no formal degree in Obstetrics and Gynaecology) performing abortions.

Even as each of these providers catered to different segments of society in the city, the quality of services offered and the charges for abortion varied accordingly.

“Women using hospital facilities for abortions are mostly educated, from an urban middle-income family, married and between 20 and 30 years of age.

Women admitted to public hospitals with complications from illegal septic abortions are largely illiterates coming from poorer segments of society.”

Legal restrictions have had no impact on the existence of illegal abortions. Women are turning to illegal methods of abortion so they do not have to go through extensive paper work and fill in personal details.

As trying as it is on the emotional health of a mother, cross references at multiple levels in government hospitals also makes the procedure long drawn physically taxing for the woman to go through. Therefore, the number of illegal or unregistered abortions performed by medical or non-medical practitioners is still very high.

This observation is endorsed by Dr. Hemalatha .

She added that the fear of being recognised by acquaintances at the hospital drives women to get abortions done at unrecognised private clinics. She added on early detection of pregnancy the woman is directed to the medical officer who performs a physical examination. In case an MTP is required they are further directed to emergency obstetrics care units for an ultrasound. If the ultrasound reveals that it is safe to go ahead with an abortion they are asked to move to the government hospital.

The crackdown on “illegal abortions”

According to the Medical Termination of Pregnancy (MTP) Act of 1971, abortions are legal only when they are carried out during the first 20 weeks of gestation to save the life of the woman, to preserve physical health, to preserve mental health, pregnancy due to rape or incest, foetal impairment, and economic or social reasons. Contraceptive failure also constitutes valid grounds for legal abortion.

The former Director of Social Obstetrics at KGH, said,

“Abortions done for any other reason other than therapeutic are termed illegal and undertaken with criminal intent.”

However, all the private clinics visited agreed to performing abortions without a proper validation of the reasons for it.

Pregnancies between 12 and 20 weeks require a second opinion, except in urgent cases.
However when private clinics were approached for the termination of a 15-week pregnancy, immediate admission was advised, without any prior consultation, proof of second opinion from another independent practitioner or a pre-procedural test.

“A foetus beyond 20 weeks has the capability to survive outside the womb independently, under favourable conditions,”

He added that any action taken on the baby beyond 20 weeks is termed as “pre-term labour” and not “abortion”.

Abortion requires the consent of the pregnant woman, or guardian in case of a minor or a mentally-challenged woman, however the purpose of this clause stood defeated when the Dean of Madras Medical College and Rajiv Gandhi Government General Hospital Dr. V.Kanagasabai said the consent form could be signed by anybody and there was no way that these signatures can be verified.

The life-long ramifications on the health of a mother and the risks involved in the process of a MTP are reason enough to say that an abortion should not be looked upon as a method of family planning or birth control. The Government of India has repeatedly emphasized this in its legislations. Yet, women often misinterpret abortion as a method of contraception.

Dr. P. Meenalochani Director and Suprindtendent of Institute of Obstetrics and Gynaecology said

“Women aren‟t aware o the repercussions of abortions and use it as a contraceptive method, and risk their health.”

Reiterating this point was Dr. Hemalatha, Head of Department of District Family Welfare Bureau who said that

“Most of the women who come for abortions were scared to practice contraceptive methods and indulged in unprotected sex. Others come to abort the third child.”

A patient at one of the privately run clinics revealed that he had two children and was “not OK” with a third one and hence had brought his wife who was five months pregnant for an abortion costing Rs. 25,000 – 30,000.

The economics of abortions – the real picture

The cost of abortions is often a deterrent for women to turn to legal institutions. While the government hospitals claim to offer MTP services for free, what people miss to see is that women spend anywhere between Rs. 100 to Rs. 600 for services even in the government hospitals. This includes the hospital room charges and the expenditure on medicines.

The private abortion providers on the other hand charge depending on the method of abortion used.

Apart from the cost of the procedure alone, what is not included in the “bargain for the price” at these clinics is the cost of follow up care. In case of complications after the MTP the cost of an abortion rises.The former director of KGH said that even though the cost of medicines which are used to induce medical abortions(RU486) cost Rs. 400- 500, many of the private clinics exploited their clients by charging them anywhere between Rs 2000 – 3000 for this procedure.

Medical abortions for pregnancies of eight weeks are done using the menstrual regulation technique while for cases below 12 weeks of pregnancy (first trimester abortions), the Dilation and Curettage (D&C) method is the most commonly used method of abortion, usually done under general anaesthesia and as an in-patient procedure.

However, it was a shocking revelation when the nurse at the Prime OBG fertility centre said that they conducted D&C for pregnancies even up to 20 weeks. A complete lack of awareness and knowledge was clearly evident.

On the other hand the former director of KGH, said it was impossible to perform a D&C procedure for a pregnancy of 20 weeks and if done could lead to incessant bleeding in the woman which could prove fatal.

Drugs such as Mifepristone(RU486) and Misoprostol used for medical abortions for pregnancies within 42 – 49 days are mandated to be taken only under medical supervision. However, Kalyan pharmacy in Adyar, in Chennai sold these abortion drugs over the counter without a prescription.

“Freely available abortion pills and their unsupervised consumption can cause severe haemorrhages and incomplete abortion resulting in life threatening situation. Medical supervision of trained doctors is required in this case.”

Although very limited data was available on the status of abortions in the city from the Family Welfare Health Bureau, from whatever was made available it was clear, that the number of abortions conducted in the government hospitals have been reducing over the past three years.

Dr. P. Meenalochani said the reduction in numbers were due to promotion of post-abortion contraception and spreading awareness about other effective contraceptive methods. 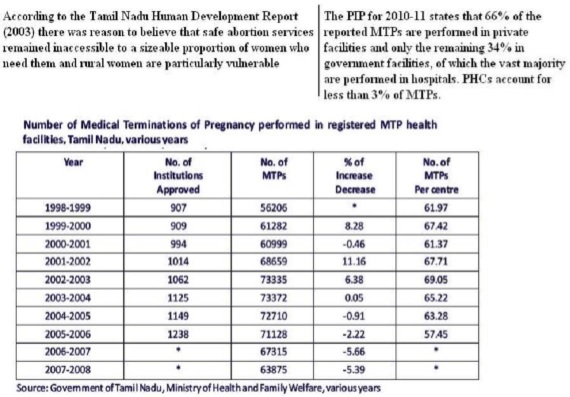 There is no record for the number of abortions being conducted by the illegal centres across the city. However, there is enough anecdotal and secondary data to prove that there are doctors following unethical and illegal ways to perform abortions.

Though the MTP act is in place it is disheartening that women resort to illegal methods to abort their foetus. To them secrecy, cheaper bills, family honour and quick relief seem to be better options than going through a safe abortion.

Next: Repealing AFSPA – Is that the need of the hour?