Messenger of God or Crime – jury is out on Ram Rahim

Sirsa: No story seems to be more paradoxical than his.

His millions of followers look at him as a paragon of virtues and a saviour who has descended on earth to liberate them from the trappings of materialism. They find him perfect in all aspects – worldly as well spiritual. They pride in quoting records of blood donations, kidney donations, charitable works and cleanliness drives his ashram has initiated in the last few years.

His detractors brand him an outlaw who has for long been cocking a snook at Indian Statute. They cite his example to question rule of law in the country. They quote the rape, murder, intimidation and castration cases he finds himself embroiled in.

Dera Sacha Sauda head Gurmeet Ram Rahim, the new Messenger of god on cinematic horizon, has controversy pitched right in the middle of his name.

Right from his date and place of birt 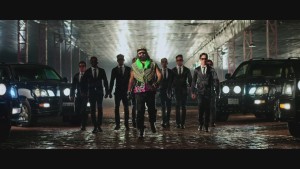 h to the kind of alleged criminal activities which have manifested in his ashram over the years, Ram Rahim, the self-proclaimed ‘Insaan’, who raps, sings fusion and folk, drives around in swankiest of cars, design them, drives tractors, gets himself photographed standing on earth flatteners, is in the eye of storm over his film ‘MSG’ which projects him as a larger-than-life figure waging a war against drug mafias.

Politicians from Haryana and Punjab have courted him every time an election is around the corner. While in the past he asked his followers to support the Congress, in last assembly polls in Haryana, he backed Bharatiya Janata Party. Be it spiritual, political and charitable, his ashram has been involved in various activities in the past. His filmy avatar is the newest addition to those.

Despite being a spiritual guru, he lives in luxury, flaunting plumed hats and flashy, motley and at times controversial robes. His ashram is believed to own thousands of acres of prime land in different parts of states like Haryana, Punjab, Himachal Pradesh, Uttar Pradesh, Madhya Pradesh, Rajasthan and Maharashtra etc.

Besides, it owns two ashrams (an old one and a new one) runs schools, hospitals, shopping complexes, hotels, auditoria and even restaurants (one on water) in Sirsa. Its market complex on Begu Road in Sirsa is unique as every shop’s name has Sach prefixed. You have Sach Harware, Sach Medical Store, Such Petrol station and Sach salon.  At the same time, it owns large fleets of buses, cars and motorbikes.

Ram Rahim claims to have held over 100 concerts across the country. Regardless of the fact that the fate of ‘MSG’ is yet to be decided, he continues to chart his filmy course and has almost wrapped up part two of MSG. According to Dera Sacha Sauda spokesman Aditya Insaan, the second part will deal with emancipation of tribals. Aditya does not rule out the possibility of Ram Rahim featuring in a trilogy of the same.

The MSG obviously is a result of Gurmeet Ram Rahim’s ego trip. The pot-bellied super baba played by him, who beats to pulp criminals involved in drug trafficking and prostitution, would help him in his pursuit of self-aggrandizement. It is clear that he has been leaving no stone unturned to promote the movie among his followers.

Going by the precedents, the followers are quite likely to pay even inflated ticket rates to watch the film. After all, they have been buying radish, carrot and other fruits grown in the Dera or declared ‘prasad’ by their guru at unheard of prices. Lekh Raj Dhot, a lawyer in Sirsa, says the followers even bought five kg peas at Rs. 55 lakh after the baba declared it prasad.

In almost every discourse of the baba, the followers can be seen waving MSG play cards as the baba justifies his acting debut saying that the film would serve as a vehicle in conveying his message against drug trafficking to youth.

As the film is set to be released on January 16, a number of Punjab cities and towns like Moga, Bhatinda, Barnala and others where the Dera followers are in good number, are sitting on a tinderbox.

Moga witnessed a riot-like situation thrice in a week after posters of the film were torn by Sikh organizations. The posters were also damaged in Doraha (Ludhiana) and Barnala.

If posters alone can ignite violent protests, one shudders to think what will happen if the theatres in Punjab and parts of Haryana, Rajasthan and Delhi where Sikhs are in sizeable number decide to screen the film.

Dera Sacha Sauda and MSG by extension are propagating what ‘PK’ has warned about. Aamir Khan-starrer film makes a strong case against babas who trap innocent citizens through their glib talks and lies. No wonder, Gurmeet Ram Rahim has trashed ‘PK’ for its tirade against god men. The baba is clear if one needs a teacher in school and college, one would need a guru in one’s pursuit of God as well.

Considering that the Dera has millions of followers in Haryana, Punjab, Rajasthan, Delhi and Uttar Pradesh (Gurmeet Ram Rahim says he has five crore followers in the country) and the Sikh Community has an equally very strong aversion to the baba, it would not be surprising to see the various Sikh bodies intensifying their demand to ban the film.

Dera Sacha Sauda has its own security paraphernalia with private guards forming a proximate ring around the baba. The baba’s guards have had several run-ins with the law of the land. They allegedly killed Ranjeet Singh and shot at a man called Balkar Singh in Mumbai in the past.Even people close to Baba move around with armed personnel in tow.

Aditya Insaan defends the security on the grounds that they face a serious threat from Khalistani Commando Force (KCF) and other terror organizations.

There are allegations that the Dera has involved retired army personnel to train its security. Expressing ‘absolute need’ for search of the ashram to unearth illegal arms and ammunition to ensure there is no confrontation with law enforcement agencies in future, Punjab & Haryana High Court recently referred the matter to its Chief Justice’s bench.  The court observed that religious places were meant to impart religious discourses and not to train private commandos.

Ram Rahim is an accused in murder of Sirsa-based journalist Ramchandra Chhatrapati who was gunned down in October 2002 ostensibly because his vernacular publication campaigned to expose wrong doings in the ashram.

Three accused (Kuldeep Singh, Nirmal Singh and Kishan Lal) are incarcerated in Chhatrapati murder case. The first two are accused of shooting at the journalist with a revolver licensed in Lal’s name who was a manager in the Dera.

A walkie-talkie registered in Dera’s name was seized from the killers. Ram Rahim has been booked under Section 120 (B) – criminal conspiracy – of the Indian Penal Code (IPC) in the case.

The women have already deposed against him in the trial court.  The court has canned deposition of all prosecution witnesses. It has even recorded statements of 28 defence witnesses. The premier central investigative agency also booked him recently for removing testicles of men in his ashram.

Ram Rahim has rejected the castration allegation. He says if there is any truth in the charge he should be hanged. But still the case raises many pertinent questions.

For one, since he prides in being addressed as ‘Pitaji’ by his ashram inmates, should he not be held accountable for what happened in the ashram premises? The Nithari case involving Surendra Koli and Mohinder Singh Pandher can be a precedent for this. Businessman Pandher is facing trial because Koli, his cook, committed the crimes in his residence.

Ansul, son of Ramchandra Chhatrapati, alleges the baba has secured several exemptions from court appearances in recent years on grounds of indisposition to shoot his films.

He charges the local administration in Sirsa and other districts of Haryana with being in cahoots with Ram Rahim. Ansul plans to approach a higher court in this regard. What is more shocking is that in some cases Ram Rahim seemed to have known about the exemptions in advance.

Ansul claims Gurmeet left for Himachal Pradesh for a shooting schedule of his film on December 18 a day before he was to appear in a court in Panchkula. Punjab & Haryana High Court granted him exemption after a sessions judge at Sirsa informed it that video conferencing hall in Sirsa could not be provided to the accused on the said date. Subsequently, the trial court adjourned its hearing till January 3, 2015.

A still from MSG

The website refers to Gurmeet as ‘his holiness’ and ‘revered pitaji’.

The Dera publishes a newspaper ironically called ‘Sach Kahun’ with editions in Haryana, Punjab, Uttar Pradesh, Delhi and Rajasthan.  His sect hands over a locket to every devotee who visits the Dera. The locket has the devotee’s registration number and other identity details.

Gurmeet stirred a hornet’s nest in 2007 by appearing in a robe identical to one worn by 10 Sikh Guru Gobind Singh. He claims to have been born on August 15, 1967 in the house of Jat Sikh family in Sri Ganganagar District of Rajasthan.One of his villagers had questioned the date as well as place of his birth. He had claimed that Gurmeet was born at his maternal grandfather’s place in Abohar (Punjab) and not on August 15, the Independence Day.

Previous: Staining The Sundarbans
Next: How technology is changing language and the way we think about the world 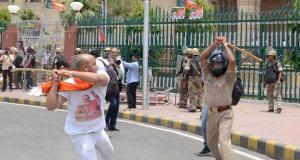