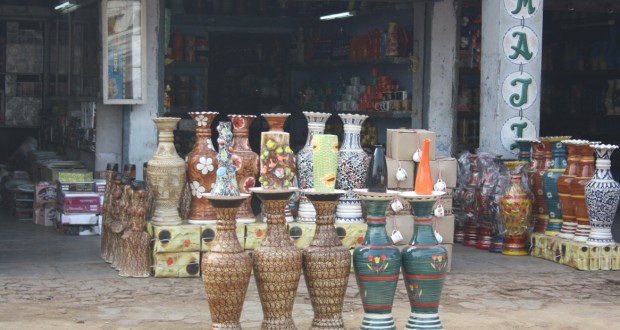 Khurja: Mohammad Nazim, the owner of Modern Art Ceramics, a flower pot manufacturing unit located on Grand Trunk (GT) Road, proudly displays a ceramic boat his workers have put together after emulating design of a Chinese boat his vendor sent from Noida. 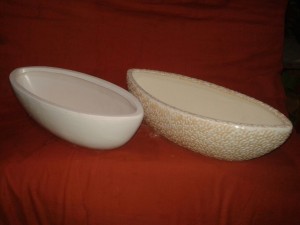 The boat made by his workers in fact, is an improved version.For one unlike the Chinese boat which is made of clay alone, it has been made from an assortment of stone and clay.

Secondly it has been heated at a higher temperature and will be more durable. And yet it will be cheaper than the Chinese product.

The ceramic pottery and crockery of Khurja, a dusty industrial town in Western Uttar Pradesh about 90 kms from New Delhi, is scoring over Chinese products when it comes to cost and quality.

Though New Delhi imposed heavy anti-dumping duties on ceramic pottery from Beijing in September this year, it allows import of electric insulators up to 1 KV, condenser bushes and transformers.

It is becoming clear that the ceramic pottery, insulators, turbine tiles, cut outs and laboratory products can withstand competition from the Asian giant.

“If a ceramics product from Khurja costs Rs. 1 a similar product from China will cost Rs. 1.50 because in India the raw material is cheaper. Despite being cheaper, the Khurja product will be qualitatively better because the manpower in the town is no less skilled than the workers engaged in Chinese ceramics,”

confirms Kushal Aggarwal, Director of Garden Glory, a company which has been importing potted plants from China for decades.

S K Jatiya, a big insulator manufacturer in Khurja, says that high tension electric wire insulators produced in the town are known for their durability unlike the Chinese insulators which develop cracks under heat. Jatiya’s grandfather Surajmal Jatiya was supposed to have majorly contributed to development of Khurja from a small town to a bustling city.

Sharma finds no match between raisin-based Chinese products and Indian products made from stone powder and clay imported from Gujarat.

The sale of ceramics products in Khurja, according to Sharma, mops up Rs 400 crore on an average annually.

Drive on G T Road which snakes through Khurja and you will see motley glaze beautifully designed flower pots and studio pottery (dinner sets) lined up outside shops located on either side of the road. You can buy a pot for as less as Rs. 20. A more artistically designed flower pot, however, may make you poorer by Rs 2,000. 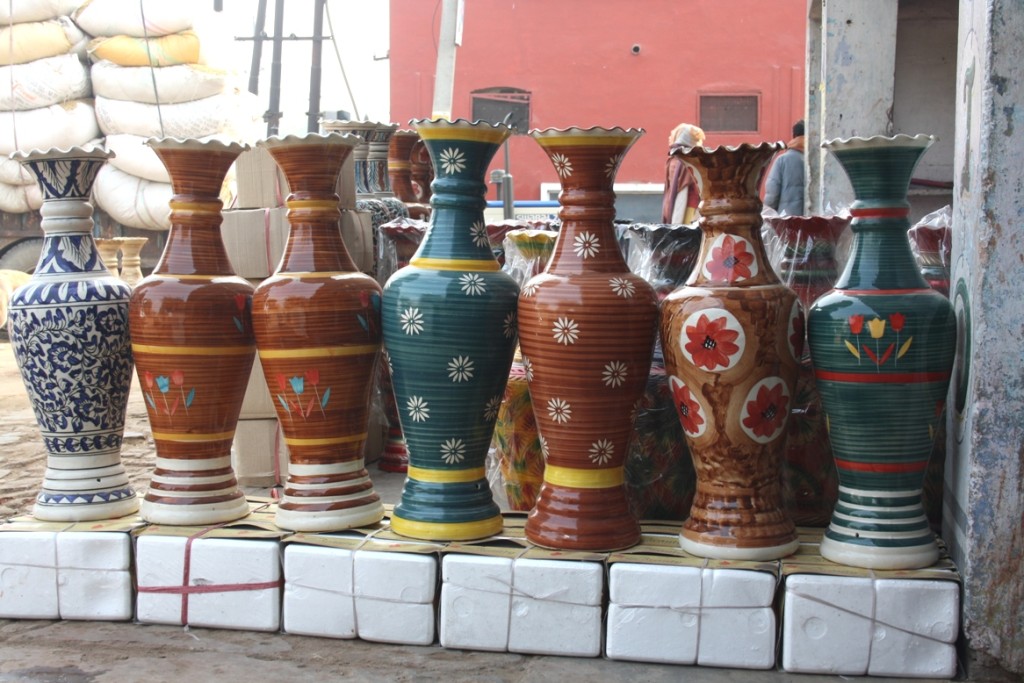 You can also shop for colourful glazed saucers, cups, mugs, bowls, salt and pepper shakers and other crockery for price ranging from Rs. 20 to at least a few thousand rupees.

But where China stands notches above Khurja in ceramics manufacturing is infrastructure and modernization.

Unlike the Communist Government of China Government which even compensates a part of anti-dumping duties imposed on its companies in other countries, Uttar Pradesh State Government has levied 14 per cent sales tax on the ceramic industry despite it being a largely handicrafts industry and even charges 26.5 per cent duty from the industrialists on piped natural gas (PNG).

Go to any industry and you will find woman and man pouring stone and clay mixtures into dyes, polishing and painting the pots yet the government collects 14 per cent sales tax forcing the industries to sale their wares without proper bills. 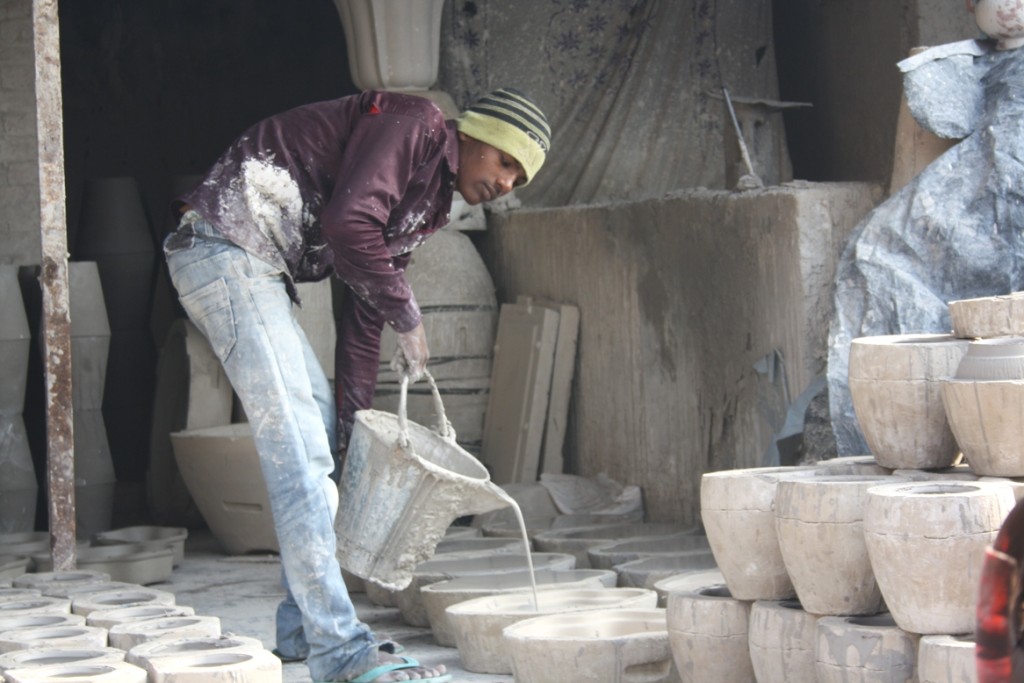 A worker pouring stone clay liquid into a dye

“Hand painting on ceramics products is exclusive to Khurja. Still ours is not a handicrafts industry,”

regrets Razi Khan, a marketing executive with Chhabra Industries which is into crockery manufacturing.

The tax drives people to under invoicing and other malpractices. A consequence of this is generation of black money and unavailability of accounted cash for buying modern machines.

Aggarwal feels the Khurja industry owners are not aware of modern techniques and computer designing which could have made them much more innovative.

Geeta, a Bengali woman polishing pots in a factory

“Our designing and packaging lags behind China,”

Ceramics manufacturers in Khurja prefer to sell popular designs at competitive prices rather than invent new designs. Also since the manufacturers have not employed machines there is no mass production happening in Khurja.

The imposition of high duty on PNG has made sure that only very few factory units have ordered its installation in last six months.

“The gas costs more than diesel. Its consumption for heating is more. Besides, the installation costs of the gas is around Rs. 10 lakh,”

Gurjit Singh Minhas, owner of Silico & Chemico Porcelain Works which exports 90 per cent of its products to foreign countries including Brazil, rues there is no government support for the ceramics industry in Khurja. 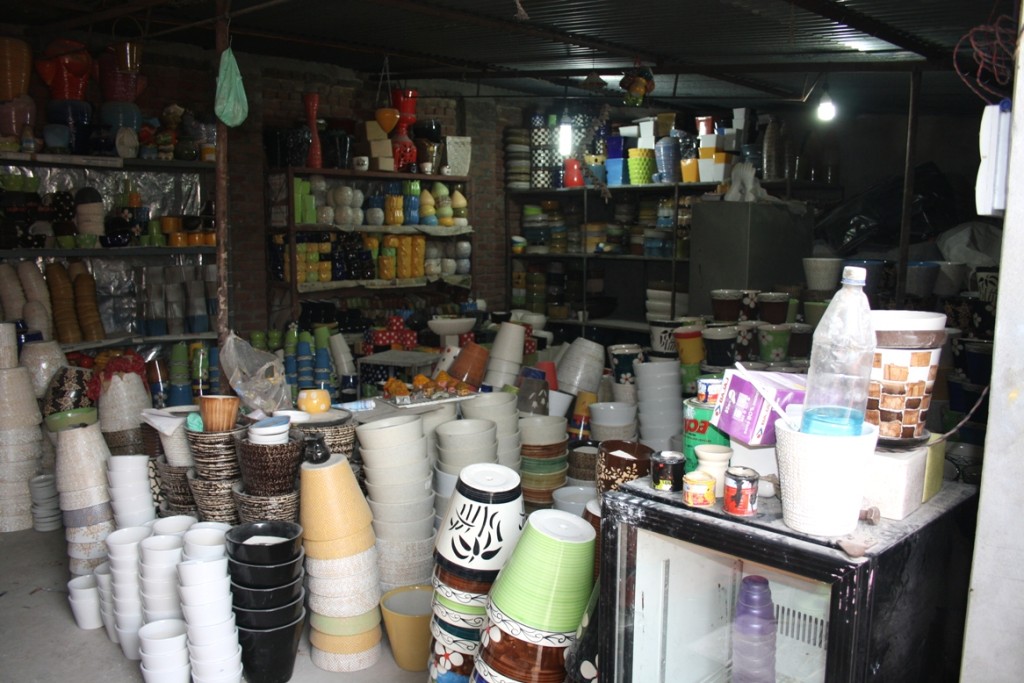 Glazed pottery in a godown

Darshan Chhatwal, who manufactures laboratory products for export, wonders why PNG which has only 5 per cent VAT (Value Added Tax) in Haryana has over 26 per cent duty in Uttar Pradesh.

Most of Khurja products are manufactured for domestic consumption. There are also manufacturers who make products for exporters sitting in Delhi, Moradabad, Jaipur and other places. 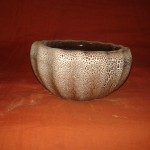 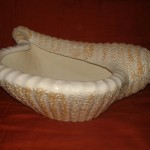 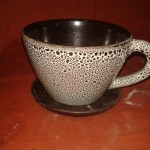 Ceramic industry was first set up in Khurja in 14th century by Timur Lung, the Turko-Mongol invader and great-great-great grandfather of Babur who defeated Sultanate in Delhi in 1370s.

Previous: Women workers in the Gurgaon industrial belt fight increasing casualisation
Next: Media coverage of Charlie Hebdo and the Baga massacre: a study in contrasts 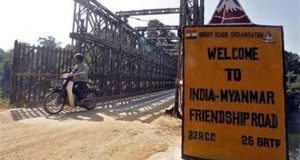 One India, One Asia 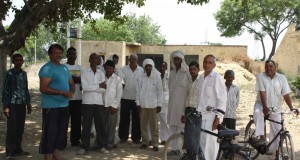