Home > Rights > Life > To kiss or not to kiss? A very Indian question 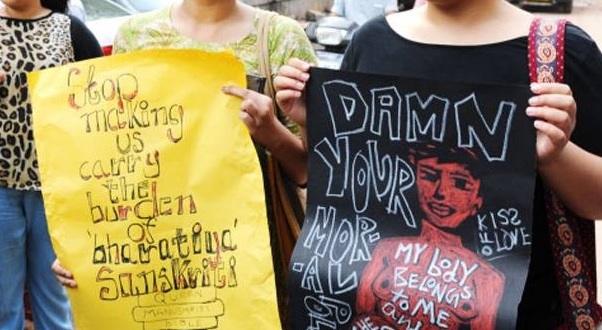 To kiss or not to kiss? A very Indian question

‘To kiss or not to kiss’ appears to be the almost existential question being discussed on the front pages of Indian newspapers recently.

If this seems slightly ridiculous to many societies, let’s be clear: it is currently a very serious issue in India. Young people, united as never before by social media, have rallied together to protest moral policing by fundamentalist Muslim and Hindu groups.

It all began in October, when a group of ‘morality’ Hindutva activists attacked a café in Kozhikode, Kerala, claiming it encouraged ‘immoral activities’ – the public display of affection.

An angry mob rampaged around the newly opened Downtown Café, smashing windows, television sets and furniture, claiming to be part of a movement to ‘protect’ traditional Indian culture.

This triggered a wave of angry protests from young people who demanded that moral policing had to stop. India has recently seen a spate of attacks on people found partying Western style – that is, drinking alcohol, and dancing – even in private homes or clubs.

A Facebook page was set up and the organizers soon had comments pouring in from mostly young people who have had enough.

The movement began properly, however, when a Facebook page called ‘Kiss of love’ invited youth across Kerala to kiss publicly, at Marine Drive, Kochi, on 2 November as a form of protest against moral policing.

The movement received widespread support, with more than 143,000 Facebook ‘Likes’. Many celebrities joined in, fed up with the coercion and bullying by fascist thugs.

The Kochi event turned out to be a damp squib because the police arrested the organizers, and many protesters, on the grounds that they were causing a public disturbance which could turn violent and harm people.

For decades, kissing was taboo in Bollywood, never mind that there was almost always suggestive, often downright lewd, wriggling and jiggling of various body parts, in several dance scenes. When Bollywood wooing began formally, it entailed singing, dancing and running around trees. But the culmination, the kiss, was never shown. Instead the viewer had to be content with watching two roses meet in a symbolic intertwining or touching. That was it.

Things have changed enormously, both onscreen and off.

Yet we are a hypocritical society. And condemning ‘modern’ – read Western – influences, is a particularly favourite pastime.

Never mind that we produced the Kamasutra centuries ago, shocking Victorian scholars with our open, unabashed depiction of all manner of sexual contortions.

I’m against the moral policing personally. But I often wonder about the need for public displays of fairly private, intimate intertwining. I’d never really thought about it at all, until an adivasi group visiting Germany in 1997 asked, not judgementally, but out of pure curiosity,

‘Why do they need to do this [intimate hugging and kissing] on the streets?’

I didn’t have an answer then. But the fact is that Indian youth who opt to fall in love (as opposed to traditional youngsters accepting partners arranged for them by their parents) have no place to go for privacy unless they rent a hotel room, which is unaffordable for most young people.

While I support individual freedom, I think most young people nowadays, forget that, two Indias – the medieval and modern – co-exist in an uneasy, difficult to comprehend time and space.

In a novel I’m halfway through, I’ve written that the sort of scene in Bangalore or Bombay, where the 21st-century modern memsahib, our Western-clad Indian woman, meets feudal India, our migrant population from the poorest Indian villages, is a potentially volatile place.

It’s like someone sent Twiggy in a time-transporter to walk the streets of Dickensian London. She’d have been arrested for obscenity, sporting her mini skirt in the midst of demurely dressed Victorian ladies. That’s the stark difference between the modern and medieval, living cheek by jowl, in Indian cities today

It’s a difficult one to resolve. No solutions here. Only sensitivity and common sense can win the day.

Previous: Village doctors go viral
Next: Populism is the word of god!