Home > News & Politics > What do the elections in Haryana mean? 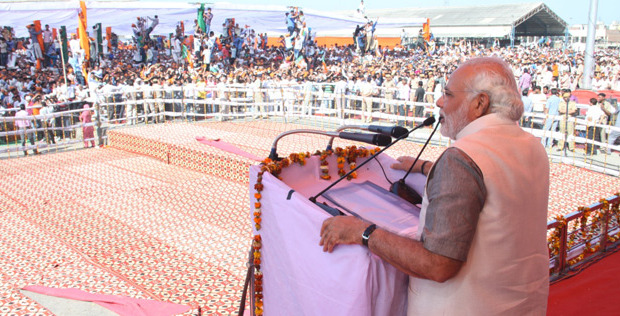 Narendra Modi addressing a Rally in Kurukshetra in Haryana | Photo: via Wikimedia Commons

What do the elections in Haryana mean?

This was the first election in last half a decade where there was no Lal – Devi Lal, Bansi Lal and Bhajan Lal- on the horizon.  The assembly polls in 2009 had Bhajan Lal’s Haryana Janhit Congress (HJC) vying against the Congress and the Indian National Lok Dal-Bharatiya Janata Party combine. Clearly Haryana is no more a land of Lals.

The 2014 has created a new record with over 76.5 per cent of the electorate exercising their franchise and beating the record 72.6 per cent polling the state witnessed in 1967.

The state has elected the highest ever number of women (13) to the state’s lawmaking house bettering the earlier record of 2004 when 11 women had made to the assembly. Eight out of the 13 have been elected on BJP ticket alone followed by Congress (3), INLD and HJC (one each).

Another obvious first is that the saffron party has crossed 33 per cent (about 10 per cent more than the runner up INLD) vote share, mopped up 47 seats (almost thrice of 16, its previous best in 1987) in the 90-member Haryana Legislative Assembly and is set to rule Haryana on its own.

Haryana result looks like a repeat of what happened in Delhi a year back when Aam Aadmi Party (AAP), a fledgling unit in politics, upstaged entrenched mainstream players the BJP and the Congress.

Yet another obvious first is that the state will first time be ruled over by a Punjabi – Manohar Lal Khattar (60), a RSS man and first time MLA from Karnal, who piped Captain Abhimanyu, five times MLA Anil Vij, state BJP President Ram Bilas Sharma and BJP Kisan Morcha head O P Dhankhar to the post.  Though Punjabi voters alone constitute only around 9 per cent of the electorate in the state, if combined with Sikhs, Punjabi Brahmins, Khatris and Punjabi OBCs, they outscore Jat voters (25 per cent).


This was also an election when arguably maximum number of political parties were in the fray making it a multi-cornered contest.

Besides the BJP, the Congress, the INLD, the HJC and the Bahujan Samaj Party (BSP), former ministers Gopal Kanda’s Haryana Lokhit Party and Venod Sharma’s Jan Chetna Party and even Shiromani Akali Dal (SAD) fought the election. It is another matter that people did not take the seasonal and smaller parties seriously. While Kanda and Sharma’s parties have drawn a blank, the HJC has been cut to two seats. The BSP and the SAD have been left with a lone victor each.

Will this election bring curtains on Jat-centric politics the major political parties – the INLD, Congress – have pursued over the years?

It is apparent that due to fragmentation between Bhupinder Singh Hooda and Om Prakash Chautala – Jats who form the largest block (over 20 per cent) – has not been a major decisive factor this time around.

The saffron party has won mainly on the back of consolidation of non-Jat votes including scheduled caste voters who moved to it from the Congress and the BSP.

The party fielded 27 Jat candidates but only half a dozen of them could win confidence of voters in their constituencies. Apparently though a small number of Jat voters used their franchise for the BJP, a majority of them opted for either Om Prakash Chautala or Bhupinder Singh Hooda.

There is likelihood that Prime Minister Narendra Modi may bring in former Finance Minister Birender Singh into his cabinet to balance the Jat factor. Khattar’s cabinet may also have at least a few Jats to keep the majority caste in good humour.

Till now, the state has had only four non-Jat chief ministers – Bhagwat Dayal Sharma, Banarasi Das Gupta, Rao Birender Singh and Bhajan Lal (the last preferred to flaunt himself as a Chaudhary).

The ascent of Khattar would mean that the politics would finally shift from Jat hinterland and part of eastern (Rohtak, Sonepat and Jhajjar), and western (Sirsa, Hisar and Bhiwani) regions to Northern Haryana (14 out of 18) and Southern Haryana (14 out of 23) where the BJP did exceedingly well.  Khattar will be the first non-Jat CM in last 18 years.

Though dynasts have had a varied fortune in 2014 elections, the loss of the INLD, Hooda and the HJC at the hustings makes it abundantly clear how the Haryana electorate looks at the ruling families.

While Kuldeep Bishnoi, younger son of Bhajan Lal and HJC chief and his wife Renuka Bishnoi have made it to the assembly, Kuldeep’s elder brother and former Deputy Chief Minister Chander Mohan has bitten the dust. HJC tally stands pruned from six seats to two seats with the party failing to garner even four per cent vote share.

Abhay Chautala, younger son of Om Prakash Chautala and Ajay Chautala’s wife Naina have managed to win while Devi Lal’s great grandson and Hisar Lok Sabha representative Dushyant Chautala lost to Prem Lata, BJP nominee and wife of Birender Singh. Chautala’s party INLD has got 19 seats with 24 per cent vote share, down from 31 seats and over 25 per cent vote share it rustled up five years back.

The loss of Congress candidates in Rohtak and Bahadurgarh (2 out of four seats) should make alarm bells ring for father-son duo of Bhupinder Singh Hooda  and Deepender Singh who has for long treated Rohtak as its unbreachable family pocket borough. Loss of Rohtak in particularly, contested by Hooda’s man Friday Bharat Bhushan Batra, is a pointer to future.

Even Union Minister Sushma Swaraj’s sister Vandana Sharma lost in Safidon to a poultry businessman Jasbir Singh after leading for a better part of the day on October 19.

It is clear that the state electorate particularly the urban non-Jat voter did not like the idea of an incarcerated Om Prakash Chautala (79) ruling from Tihar jail. It may be curtains for the former Chief Minister who has for long been ailing.

The electorate also voiced disapproval of Hooda regime doling out farmers’ land to the likes of DLF and Sonia Gandhi’s son-in-law Robert Vadra.

Congress which has garnered 15 seats (only 12 of its sitting MLAs have returned) with over 20 per cent vote share will not even be the principal opposition party in the state.

Thumbs down to Hooda’s lopsided development

Since the BJP has done exceedingly well in Gurgaon, Karnal, Yamunanagar and Ambala, it is expected that the millennium city and the National Highway-1 belt will once again matter for the new dispensation in development plans which fructified more in Rohtak-Jhajjar region under Hooda.

Bhiwani, Mahendergarh, Hisar, Rewari and Jind, which lagged behind during 10 years of Hooda’s rule, too can hope for a better bargain. They, after all, have given the BJP a better haul than last time.

The state voters have given a resounding blow to scamsters and controversial politicians with Gopal Kanda who is a prime accused in airhostess Geetika Sharma’s suicide, Venod Sharma, father of Manu Sharma who is serving life sentence in murder of model Jessica Lal, failing to make it to the 13th state assembly.

Six others, who were accused of involvement in change of land use scam (INLD had screened a sting film to press charges against them – former Health Minister Narender Singh,  Chief Parliamentary Secretaries Vinod Bhayana and Ram Kishan Fauji and MLAs Jarnail Singh, Naresh Selwal and Ram Niwas Ghorella losing the election. Apparently, the electorate is not convinced by Bhupinder Singh Hooda’s claim that the accused are innocent till proven guilty.

Overall 75 out of the 90 newly elected MLAs are crorepatis with BJP leading the race with 40 out of its 47 MLAs being millionaires.

No to divide and rule

United Progressive Alliance’s attempt to woo Jats with OBC reservation has not worked. The voters from the agrarian caste remained sandwiched between the Congress and Om Prakash Chautala’s INLD.

Hooda’s gamble to create a Sikh constituency for the Congress by creating a separate Sikh Gurudwara Prabhandhak Committee (SGPC) in the state also failed as a two third of the 18 seats where Sikh voters have a significant presence have gone to the BJP.

NOTA not a great option

The electorate in Haryana has confirmed what has been an overriding judgment since November 2013 when NOTA (None of the Above) option was first introduced in Electronic Voting Machines (EVMs).

NOTA has the lowest vote share in the state. Only 0.4 per cent (53,381 voters) pressed the NOTA button in the state even less than what Kanda’s party (1.2 per cent), Vinod Sharma’s party and the SAD (0.6 per cent each) garnered.