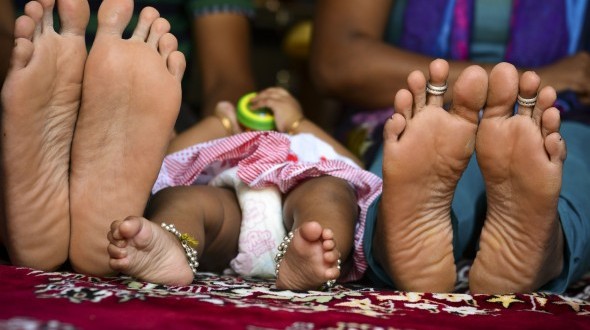 An abandoned Australian baby, born to a surrogate Indian mother, has apparently caused some concern in Australia. In India, where life is cheap, one more baby born, abandoned or dead, in a land of over one billion, rarely makes waves.

The baby in question was left back with the Indian birth mother because the Australian parents wanted just the one child and were unprepared for the birth of twins.

They already had one kid back home, so they chose one, the reports say, according to the gender that suited them, leaving behind the unwanted twin.

The Australian High Commission in India confirmed the veracity of the reports, but pleaded helplessness. They tried persuasion, but surrogacy is a personal matter. It’s a fairly recent phenomenon, with few laws governing the transactions.

The High Commission could only issue a passport for the one child, on the request of the parents. It could not legally force them to take the other twin. Neither, it seems could the Indian government. So here we are, with the unenviable scenario of one little Australian baby left behind with a reluctant mother.

To appease apprehensions, however, the baby was quickly adopted by an Indian couple. Light-skinned babies are in greater demand here than their darker counterparts.So not such an unhappy ending, hopefully.

Activists who have persistently pointed out that there are inadequate laws to protect surrogate mothers and babies in India are using the incident to renew demands to get some decent laws in place.

So are the Australian authorities. Decent, is of course, a debatable word here.

As expected, the women who rent out their wombs for a fee are poor and vulnerable. It has become something of an industry now – poverty-stricken women making babies for rich women who can’t or won’t go through the tedious process themselves. This is not a judgement on women desperate to have babies biologically their own.

Is there less exploitation in surrogacy than in trafficked sex workers’ lives? Being judgemental is of little help. It is probably impossible to comprehend the anguish that couples who desperately want a child of their own may go through. Or even to seriously empathize with them, unless one has gone through a similar experience.

But what we do need to do, urgently, is to recognize and regulate the exploitation that can take place at the other end, in the village or small town where income generation means rent-a-womb.

If it is far more lucrative than most other work, it is easy to see greedy husbands and in-laws embarking on this new method to rake in the filthy lucre. Women’s bodies count for less than nothing in far too many parts of our country. So the dangers to a woman’s health through multiple pregnancies will be of little concern or import to the brokers involved in the deals.

‘I think international surrogacy is the new frontline in human trafficking and we have enough anecdotal evidence to believe that people are commissioning children willy-nilly without any proper protections for the children or for the surrogate mothers,’

With increasing global infertility, I would imagine this is an issue that is gaining currency all around the world.

While Western women find it more affordable to have surrogate babies in India or other poor countries, wealthier Indian women are looking for similar options too. The market can only expand.

The question before us is how we can deal with surrogacy issues so that both the surrogate mothers, genetic parents and the babies born to them, all receive a fair deal.

Mari Marcel Thekaekara is founder-associate director of ACCORD, an organisation that works with the tribals of Gudalur, Tamil Nadu. She is the author of Endless Filth, a book on the safai kamdars of Gujarat. Her articles are published here with her permission.
Australia Children rights Ethics India Society surrogacy women's rights 2014-10-11
Team PB7