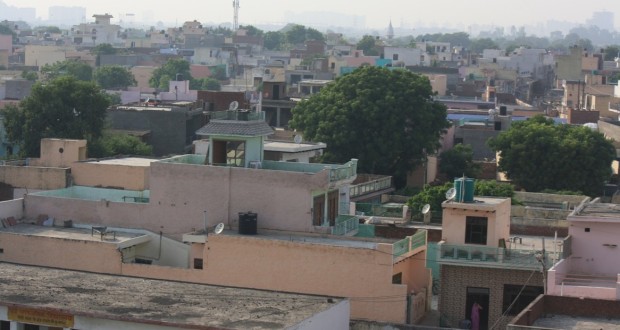 An overview of ghodi village

Greater Noida: It is a tale of two villages. Supposed to be descendents of two Bhati Rajput or Rawal Rajput brothers, the two villages Ghodi Bachchera and Til Begumpur, located on the outskirts of Greater Noida, have maintained brotherhood for at least a few centuries.

Every time there is a marriage, a death or any other function in Ghodi, elders of Til Begumpur get the honour to lead the ceremony. Similarly whenever there is celebration or mourning in Begumpur, guests from Ghodi partake in the honours. Every time, either of them faces a threat from Gujjars or any other community in the neighborhood, the other is the first to rush for assistance.

But it is only half of the story that they have maintained their blood ties over the years. 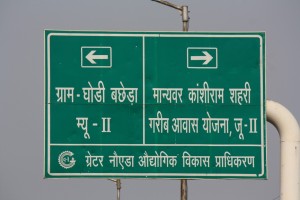 The other half and more significant part of the story is that the two of them have practiced different faiths for centuries and yet not let their religious beliefs mar their genetic bond.

They have proved that blood is thicker than water and even creed.

The story is that Til was established by Rao Kasan Singh after defeat at the hands of a Muslim ruler delivered him to Islamic fold. Kasan Singh was rechristened Rao Qasim Ali Khan after conversion. History says Rao Kasan, son of a Maharawal (grand king) of Jaisalmer (Rajasthan), once ruled over Kasna (now an integral part of Greater Noida) which before him was known as Kelagarh.

Ghodi was set up by Kasan Singh’s younger brother Ranbir Singh who lived and died a Bhati Rajput. One of the brothers was also supposed to have fathered Bhati Gujjars after marriage with a Gujjar girl.

Despite practicing different religions, the two siblings breathed for each other during their lifetime with the younger one swearing that his children would always first honour the elder brother’s family in every function. They have continued the practice ever since.

“Til is Ghodi’s elder brother. Even the villages which have over the years originated from Ghodi – Samadhipur, Dadri, Badhpur, Dhoom, Aamka and Jaitpur – converge on this,”

says Gopal Dev Pratap Rawal, a political activist sympathetic towards Rashtriya Swayamsewak Sangh (RSS).  Rawal, who once contested for Lok Sabha from Gautambudh Nagar parliamentary constituency, claims the residents of Til have stood by Ghodi in various crises. 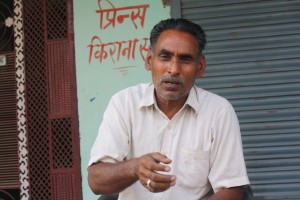 For instance in mid eighties when an eve teasing incident almost pit the Rajput villages against the large Bhati Gujjar community, Til was the first to side with Ghodi.

“Til residents openly declared their support to us,”

recounts Dharambir Rawal, another Ghodi resident. Even when Ghodi Rajputs wanted to raise boundary around an old Devi temple and faced resistance from a few local Muslims whose graveyard adjoined the temple, Til shored up the Rajputs’ cause.

“They reprimanded the Muslim families in a Panchayat saying why they cannot contribute some land to the temple,”

recalls Suraj Pal Singh, a retired person. Dr Farman, an elderly person in Til, endorses the incident. Farman is all set to invite a select few from Ghodi for his son’s marriage. 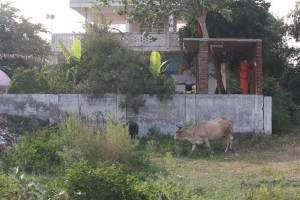 The muslim graveyard which adjoins a temple complex

In 2008 also when half a dozen people from Ghodi got killed in an agitation against Greater Noida Authority Til residents came forward to sustain the movement.

Similarly, Ghodi has always stood by Til in difficult times.

“When we had a confrontation with Gujjars in the past Ghodi joined us,”

reminisces Chaudhary Shamshuddin Rawal (70), a former Sarpanch of Til.

The Muslims in Til and other villages – Dhaula, Andhel, Mandpa, Kaumra and Jalalpur – which have been offshoots of Til prefix Chaudhary and suffix Rawal to their names. They prefer to be called Rajput or Bhati Muslims.

“Ghodi wale (Ghodi residents) are our younger brothers. Wo hain tau hum hain. Jyada hi mohabbat hai hamari (We are there because of them. Our love is very strong)”,

declares Najamul Hasan, Imam of an ancient mosque in Til, on a round of the village.

interjects Chadhary Naseem Singh, a retired superintendent of Sikanderabad roadways depot and another villager in Til. Singh wishes to write a book on how his ancestor Rao Kasan Singh became a Muslim.

Over the years, a number of anomalies have crept into the story.

But both of them are in agreement that the elder brother sacrificed his religion and became a Muslim to protect his younger sibling from a certain hanging in a Muslim kingdom. The common refrain at the both the village is that they are one and the other village is their own. 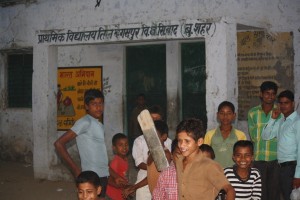 Once Ghodi was believed to have owned 52,000 bighas of land which got divided equally between two brothers – Kasan Singh and Ranbir Singh or Tilak and Fateh.

Over the years while Ghodi has become more prosperous probably on account of acquisition of their land by Greater Noida Authority Til still looks steeped in poverty and inadequacy.

The former has built elevated concrete (RCC) avenues while the latter witnesses flowing of sewage into its broken streets.

On top of it, the latter only has a primary school and for further studies the villagers have to trudge long distances.

Besides agreeing on being descendents of two brothers, the villages also converge on a story that the Bhati Rajput rulers organized theft of two Arabian horses – Raya and Suraya – from the Mughals’ court and gave them in dowry to the then rulers of Bikaner.

Ghodi derived its name either from the theft or loss of a horse-driven tonga from Kasan Singh’s fort in Kasna.  The second part sounds more plausible as you also have villages named Tangda (where the lost tonga was traced) and Jinpit (where the horse’s nose rope was spotted) in Greater Noida.

Til which was hitherto known as Til Ghodi due to its umbilical association with Ghodi has since been rechristened Til Begumpur by authorities in District Bulandshahar. Similarly Ghodi, which was called Ghodi Bachcheda all along, has since been shortened to Ghodi in official records. 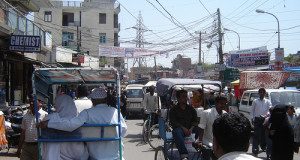 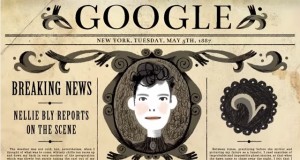 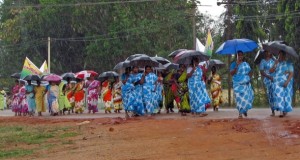