Home > National Affairs > Military Affairs > Repealing AFSPA – Is that the need of the hour? 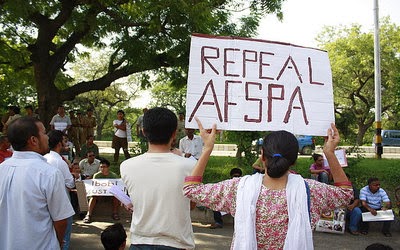 Repealing AFSPA – Is that the need of the hour?

It was applied first in Nagaland, then in 1980 in Manipur and later in Jammu and Kashmir. It was passed by Parliament of India to provide legal security to the armed forces carrying out operations in the troubled areas of Arunachal Pradesh, Assam, Meghalaya, Manipur, Mizoram, Nagaland and Tripura.

AFSPA provided provision to the armed forces to deal with insurgency in disturbed areas under the Disturbed Areas Act. Under the 1972 amendments to AFSPA, the choice of declaring any area as ‘disturbed’ vests both with State and Central Government.

However it remains unclear at which level the law and order situation would be characterized as ‘disturbed’.

It establishes that no legal proceeding can be brought against any member of the armed forces without the permission of the Central Government.

The army can shoot to kill or otherwise use force, against any person who is acting in contravention of any law” against “assembly of five or more persons” or possession of deadly weapons if the officer is “of the opinion that it is necessary to do so for the maintenance of public order”.

They army can destroy property from which armed attacks are made or likely to be made or attempted. It can arrest any person without warrant who has committed a cognizable offence or against whom a reasonable suspicion exists that they have committed or is about to commit an offence. They can enter and search, without warrant, any premises for purpose of arrest or to recover any person, arms, ammunition or explosives.

Since its inception, the law has received widespread criticism from various human rights organizations and civil societies.

While critics of AFSPA allege that it gives the military personnel draconian powers, Sanjoy Hazarika in The Hindu on Feb 12, 2013 said that the army believes that AFSPA is like its “Bible” and that if the Act is removed it will face the prospect of fighting “with one hand tied.”

Sanjoy however, also brings out the fact that in 54 years, not a single army, or paramilitary officer or soldier has been prosecuted for murder, rape, destruction of property (including the burning of villages in the 1960s in Nagaland and Mizoram).

Walter Fernandes in The Hindu on Feb 12, 2013, said that the Government has been elected to rule the country and it is their duty to ensure that the security forces work under the Constitution and not under a law that violates people’s right to life and dignity with impunity.

The army however believes the repeal of the act could prove disastrous at the Central and the State government. Not only would it dilute the powers of the armed forces to tackle the security challenges faced by the country, it would also inhibit military personnel from getting involved in search operations motivating insurgent leadership in villages.

Lt Gen Harwant Singh in his review on Feb 04, 2013, said that the annulment of the law will not only make military personnel vulnerable to false civil cases but also increase the possibility of them being framed with false evidence from hostile witnesses.

In 2004, following the death of Manorama Devi, while in the custody of the Assam Rifles and the indefinite fast undertaken by Irom Chanu Sharmila, the Central Government set up the Jeevan Reddy commission, which recommended the incorporation of AFSPA in the Unlawful Activities (Prevention) Act, 1967, operable all over India.

The Government however, successfully stalled any effort to dilute or amend the Act by neither officially accepting nor rejecting the findings of the Jeevan Reddy Committee report.

Although the Prime Minister, Manmohan Singh decided that AFSPA must be reviewed, he did not follow this up because the opposition from the Ministry of Defence has been strong.

Commenting on the issue which did not fall under the purview of his Ministry, the Union Finance Minister P. Chidambaram said,

“you should ask the armed forces why are they so opposed to even some amendment to AFSPA which will make [it] more humanitarian. If the Army takes a very strong stand against any dilution or any amendment to AFSPA, it is difficult for a civil government to move forward.”

Marouf Ahmad Parray in his article in the Kashmir Reader on Jan 31, 2013, quoted a retaliation by Lt Gen Om Prakash, General Officer Commanding (GOC) of Army’s Srinagar-based 15 Corps who said that,

“Not only in rape but even on teasing, the accused soldier or soldiers face court martial.”

“There have been a number of cases wherein civilians were co-accused with soldiers. While no action was taken against civilians, the soldiers are in jail after their court martial.”

He claimed that the action taken in such cases is “done” irrespective of whether AFSPA is in vogue or not.
Has AFSPA then, really served its purpose?

In spite of the existence of the Act, India is seeing a rise in the number of militant groups.

As Walter Fernandes points out that AFSPA was enacted in 1958 on an experimental basis for six months as a measure against “terrorist” groups in the North East.

However, in 1958 there was one “terrorist” group in the North East. Manipur had two groups then. Today, Manipur has more than twenty such groups, Assam has not less than fifteen, Meghalaya has five of them and other States have more groups.

Insurgency needs to be put down with a firm hand within the provisions of law. Repealing AFSPA may not be of help. However, what could work instead is managing the implementation of the law properly.