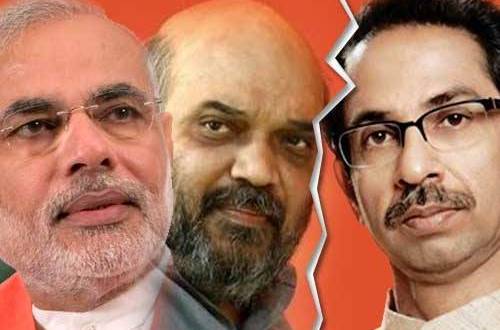 Vidarbha, the perennially parched eastern region of Maharashtra which finds a mention every time the media writes on farmer suicides, is definitely a place where Bharatiya Janata Party (BJP) will be celebrating its separation from Shiv Sena.

With Sena, the diehard proponent of united Maharashtra, gone out of Mahayuti, the coalition of BJP and three other small parties, the BJP is expected to whip up a frenzy to fuel local aspirations for statehood and maximise its gains in the 62 assembly seats (four less than the last time – 2009 – due to delimitation), the 11 districts of the region elect for the 288-member Maharashtra Legislative body.

The area famous for growing cotton suddenly looks very fertile for cultivation of saffron to Amit Shah and his team.

“Our break up with Sena has certainly given us an advantage. This time around we will be more vocal about Vidarbha statehood. We will contest around 25 more seats (which would earlier go to Sena) and increase our tally substantially,”

Ajay Sancheti, Rajya Sabha MP and confidant of Union Minister Nitin Gadkari, endorses Dhotre. Sancheti is prepared to bet on 40 seats for the BJP, 18 more than what the party rustled up during the last assembly polls. The member of Upper House of the Parliament assures that his party is committed to carving Vidarbha state out of Maharashtra. He refers to a resolution the BJP passed in Bhubaneswar in 1996.

“We stand by Bhubaneswar resolution and are committed to Vidarbha’s statehood and development,”

BJP to verve up Vidarbha

The movement for separate Vidarbha has gained much ground in recent months with lawyers, journalists and leaders from across the political spectrum using social media to flog the century-old demand.It has particularly picked up pace after the creation of Telangana.

Around a dozen groups have become active on networking sites like WhatsApp and Face book.

To BJP’s advantage, the VRSS, which contested elections in the past, is unlikely to join the fray this time around.

Earlier in January this year, a BJP MLC in Nagpur demanded separate statehood for Vidarbha on the grounds that post of a divisional board chairman in education department was vacant for over 13 months. He cited the vacancy as an evidence of Mumbai-based Maharashtra establishment’s neglect of Vidarbha (Eastern Maharashtra).

In May this year, the statehood movement activists hoisted Vidarbha’s flag in all 11 districts of the region including Nagpur and Amravati.

The movement spearheads are dismayed that Maharashtra National Law University which was to start functioning in Nagpur from this year will get delayed by a year now.

But till now the fear of Sena forced the state BJP leadership not to be very loud on Vidarbha demand.

An editorial in Samna, the Sena mouthpiece, earlier this month even warned the BJP against pursuing division of Maharashtra. The BJP let it pass because it was in alliance with the Sena then.

The BJP has traditionally been strong in Vidarbha. The region has contributed handsomely to its best and worst performances in the state.

During parliamentary elections earlier this year, the BJP-Sena riding on Narendra Modi wave made a clean sweep of all 10 Lok Sabha constituencies (BJP 6, Sena 4) in Vidarbha.

Over all the BJP led in 133 of the 144 assembly segments (24 Lok Sabha seats) it contested in Maharashtra in the last general election.

In the last state elections while the BJP triumphed in 46 out of the 119 seats it contested, the Sena could win only 42 out of the 169 it fielded candidates from.

Its increasing vote share and Narendra Modi factor is what made the BJP demand half of the seats from Sena whose stock has gone down considerably since 2004 when Uddhav Thackeray took over Sena reins from his father late Bal Thackeray.

It is a given that the BJP and the Shiv Sena and for that matter the Congress and the Nationalist Congress Party (NCP) also would have sabotaged each other prospects to gain one-upmanship for Chief Ministerial chair had they remained in alliance.

After separation, the four parties will have a much healthier and fair competition at the hustings to claim the top executive post in the state.

The Shiv Sena, which was a dominant partner in coalition with the BJP for two decades and a half majorly on the basis of better showing in Konkan and Western Maharashtra, will know whether Uddhav can claim the coveted post of Chief Minister in the state.

The NCP will know whether it succeeds in doubling its tally in Marathwada from the 12 seats it won in 2009 assembly elections in alliance with the Congress. The Congress had then picked up 18 seats in the region which sends 46 MLAs to the state legislative assembly.

Besides, throwing an opportunity to all political parties to increase their vote share in the state, the two divorces could open numerous possibilities for realignments based on permutations and combinations.

The poll gives 45 seats to the Congress, 11 to Maharashtra Navnirman Sena (MNS) and 19 to others.

The divorces between big partners have increased the relevance of fringe political players like Samajwadi Party (SP), Republican Party of India (Athawale), Shiv Sangram, Rashtriya Samaj Paksha and Swabhiman Shetkari Sanghatana but there too it appears the alliances are leading to heart breaks too soon.

Take the case of Congress and Samajwadi Party. The two have parted ways even before the ink on their matrimony has dried.

BJP and Sena which were even reluctant to part with 20 seats for the smaller partners in Mahayuti (grand coalition), are now wooing them with plum ministerial posts and much larger number of seats.

The BJP in its quest for the majority mark (145 seats) is prepared to leave over 30 seats for them and has almost sewed up with Shiv Sangram, Rashtriya Samaj Paksha and Swabhimani Shetkari Sanghatana.

Ramdas Athawale, who has been angling for a central ministry for over a decade, is once again haggling for it even after the saffron party has agreed to leave eight seats for his party.

It will also be interesting to see which party bags Leader of Opposition (LoP) status in Maharashtra assembly after the polls.

Here what holds true for the Lok Sabha also holds true for the assemblies. Besides scoring 10 per cent vote share (30 assembly seats), a political party will have to make sure that its rivals in opposition do not notch up more seats than it.

Due to its two-seat lead over Sena, the BJP enjoyed the honour in the current state assembly. The LoP is entitled to perks and status of a cabinet minister.