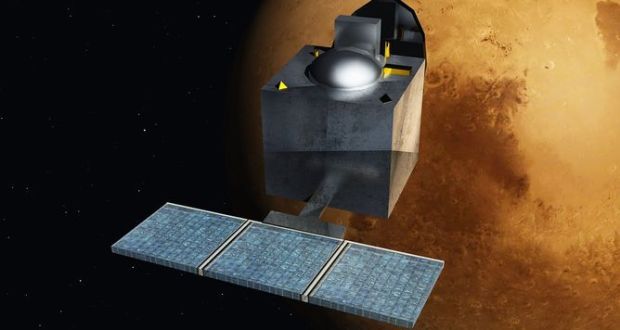 Mars has become the destination of choice for ambitious space agencies and nations. Now India is among that group.

After a successful manoeuvre the Mars Orbiter Mission (informally called Mangalyaan, which is Hindi for Mars vehicle) of the Indian Space Research Organisation (ISRO) has entered an orbit about 420km above the surface of Mars.

It will soon begin to photograph the planet’s surface and analyse the atmospheric composition.

As a member of two previous missions to Mars, I understand the excitement and challenges of landing, or in the case of Mangalyaan, orbital insertion. Waiting for a signal telling the ground staff about the mission’s fate must have been a nerve-wracking time for Indians.

Attraction of the red planet

Ever since the earliest telescopic observations in the 17th and 18th centuries, Mars has shown tantalising hints of seasons, water and active geological processes. Over the centuries our understanding about Mars has changed as the resolution of telescopes and spacecraft cameras and spectrometers have greatly improved.

Today as a result of the Mars Science Laboratory rover Curiosity and Mars Reconnaissance Orbiter we know that the red planet once had thick mudstones deposited in large lakes. Drilling by Curiosity has shown us that red colour of Mars – the result of iron reacting with oxygen – is only “skin deep”.Underneath that thin layer of red is a very different planet. This well-preserved history may even hold clues to the presence of microbial life on Mars.

This is one reason why Mangalayaan and the American MAVEN mission, that entered orbit on September 21, are exciting.

They will both be looking for the presence of methane, which could inject fresh energy into the debate of life on Mars.

Future rover missions, such as the European Space Agency’s ExoMars or US National Aeronautics and Space Administration’s Mars2020, with new specialised instrumentation, may provide a definitive answer.

ISRO’s achievement is special for other reasons, too. Not just is it the first Asian country to reach Mars, but it is also world’s cheapest mission to reach Mars. Other aspiring space agencies will have been watching, and they will want to learn soon.

At an advertised cost of US$72m, it is a small fraction of the cost of the US$671m MAVEN mission. A part of the reason for the frugality is the cost of instruments.

Although the underlying lure of Mars is scientific, Mangalyaan is primarily a technology demonstration. Its camera, for instance, will not match that of other Martian probes.Similarly it will not match MAVEN’s ability to measure the rate at which certain chemicals are lost from Mars’ atmosphere.

But the instruments on a space mission, such as those on the planned European rover ExoMars or Curiosity, cost about 10% of the overall mission cost. So, even if that is factored in, Mangalayaan’s shoe-string budget remains striking.

Although it couldn’t carry a heavier payload, it was able to push Mangalayaan on the way to Mars for a fraction of the cost.

This success will appeal to future commercial users of the ISRO’s launch services. Countries as diverse as Algeria and Israel, or Singapore and Switzerland, have been served by ISRO’s commercial arm. With Mangalayaan’s success, more are sure to follow.