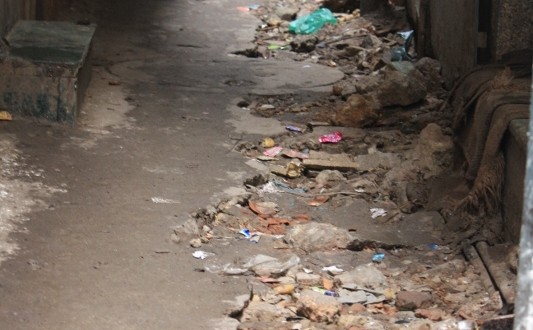 Why BJP is wary of Delhi Elections

New Delhi: Dharam Dev Solanki, veteran BJP MLA from Palam Assembly Constituency, spends bulk of his day hours in redressing complaints of his constituents about drinking water even in late August. His constituency is parched during major part of the year. Dry ponds in and around Palam Village are an evidence of acute water scarcity in the area.

So is Muank Water Treatment plant, a facility located at a stone’s throw from the village, which was supposed to have distributed water fetched from Haryana through 100-km long Munak canal. A Public Interest Litigation (PIL) filed recently in Delhi High Court by RWAs (Residents Welfare Associations) of Dwarka Sub city has once again sought directions for release of water in the canal.

The PIL also pits Dwarka and Palam Assembly Constituencies against each other alleging that unauthorized colonies like Mahavir Nagar and Madhu Vihar in the latter were pilfering water meant for Dwarka Sectors. Apparently like Palam, Dwarka Assembly Constituency, represented by BJP’s Pradyuman Rajput, too is beset with water woes. 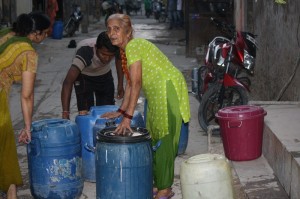 There is always a fear that the prospects of Solanki and Rajput, otherwise popular MLAs, may be swept away in the dry spell, aggravated by the poor monsoon.

Besides Palam and Dwarka, there are at least a dozen other assembly constituencies in West, Central and South Delhi where getting drinking water is akin to winning a war.

In Sangam Vihar, arguably the largest illegal settlement in Delhi, people are at the mercy of a private water mafia which has even laid its own pipelines.

The various blocks of the settlement, constructed on forest land, mainly survive on DJB (Delhi Jal Board), private tankers and water mafia operating in the area.

All these constituencies (except Sangam Vihar, Okhla and Malviya Nagar) are represented by the BJP in the current Delhi legislature. Apart from drinking water, what makes many parts of Delhi unlivable is lack of sewerage and unauthorized construction.

A street flooded with sewage in Gokalpuri

Since municipal bodies in the national capital are not authorized to provide sewerage in illegal colonies, the two (sewerage and illegal construction) always work in tandem.

The biggest identity of an unauthorized settlement is the slush which flows in its open drains.

More often than not, the squelch courses into houses, shops, roads and streets.

You may take a round of either from among Mustafabad, Karawal Nagar, Sonia Vihar, Seemapuri, Ghonda (Northeast) Kirari, Vikaspuri, Sultanpur Majra (West), Swatantar Nagar (Narela), Libaspur, Palla, Wazipur, Bawana (North), Kalyanpuri and Gokalpuri (East) to get a firsthand view of the connect between encroachment and open drainage.

In Sonia Vihar and other unauthorized colonies where the cemented streets are invariably above the level of houses, rains are feared the most.

There are over 364 villages, several thousand unauthorized colonies (over 1600 have applied for regularization) in Delhi, 685 slums, 45 JJ clusters and around 2,400 colonies which are under the jurisdiction of various offshoots of MCD (Municipal Corporation of Delhi). 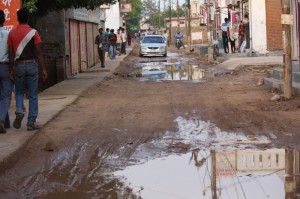 A katchi street in an unauthorised colony in Matiala

In Matiala and Bawala, the largest rural constituencies in Delhi comprising at least a few dozen villages almost an equal population of electorate lives in slums, J J clusters and unauthorized colonies.

Drinking water, sewerage, lack of parking space, inadequacy of health care, marginalization of villages, unauthorized constructions there for multiplication of rent income, mushrooming of irregular colonies and slums on government, municipal and DDA land, encroachments in streets and roads and traffic jams make the national capital a cocktail of horror. 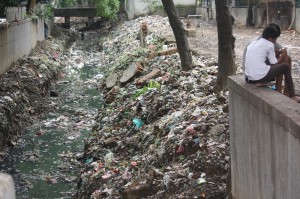 Broken wall of a park in Dakshinpuri extension

Since every political party promises resolution of these long standing issues before they are voted into governance, they are also made to pay for their failure to resolve them.

Electors derive cathartic satisfaction from voting against the ruling dispensation. The BJP, which is ruling Delhi State by proxy, will be no exception to this.

What has further weakened saffron challenge is the fact that it does not have strong and credible face to take on Arvind Kejriwal’s AAP. Harsh Vardhan, the last Chief Ministerial candidate of the party, has since been elevated to Narendra Modi’s cabinet as Health Minister.  Vijay Goel, former Delhi BJP President, is serving in the Rajya Sabha, the Upper House of the Parliament and is unlikely to be recalled.

The dearth of leadership in the Delhi unit can be gauged from the fact that every time the party feels spasms for rustling up a government the name of Rambir Singh Bidhuri, a former NCP (Nationalist Congress Party) leader, who now represents the BJP in Badarpur Assembly Constituency, comes into circulation.

Current Delhi BJP chief Satish Upadhyay, a first time councillor from Malviya Nagar ward who also runs a media school, lacks stature. Though Prime Minister Narendra Modi continues to retain some of the halo he enjoyed during the general elections it is to be noted that in Delhi elections, people will be voting for a Chief Minister. 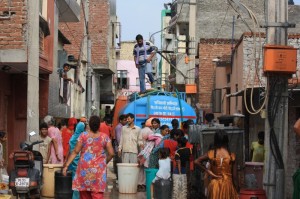 To BJP’s dismay, Congress and Bahujan Samaj Party have failed to wrest back the lower middle class it lost to the AAP during assembly elections in last year.

Kejriwal enjoys strong backing in slums, JJ clusters and unauthorized colonies despite having created ‘anarchic’ situation during his 49-days in power.

Though the former Income Tax Commissioner and his cohorts put off the middle class with their ‘vigilante’ justice Kejriwal is making efforts to woo it back. His pledge that he will not quit again come what may if voted to power is part of this effort.

The middle class voted largely for Modi during the Parliamentary polls but there is no guarantee that it will do the same in assembly elections.

Unlike May this year when the AAP gravitated to register its presence on the central landscape and in the process pitch forked itself nowhere, this time around the party has decided to burn its calories only in Delhi.

The success of the BJP in assembly elections would largely depend on whether and how much the saffron party cuts into the AAP’s lower middle class and middle class vote.

Until now, the BJP which currently has 29 MLAs (one Shiromani Akali Dal member) in the 67-member Delhi (three – Harsh Vardhan (Krishna Nagar), Ramesh Bidhuri (Tughlakabad) and Pravesh Verma (Mehrauli) – have since become MPs) has not completely given up on forming a government with the help of independents (Vinod Kumar Binny (Laxmi Nagar), Rambir Shokeen (Mundka), Shoib Iqbal (Matia Mahal) and defectors from either the Congress (8 MLAs) or the AAP (27 MLAs).

Lieutenant Governor Najeeb Jung who has been ruling Delhi State since February this year confirms this when he says that political parties have not ‘exhausted their efforts towards government formation yet’.