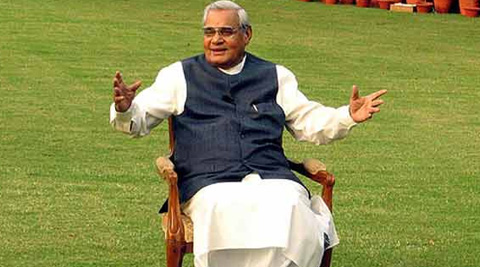 When Vajpayee almost shut door on his sister

New Delhi: It was on a Bhai Duj, a Hindu festival celebrated on the last day of five-day long Diwali.  One of the sisters of Prime Minister Atal Behari Vajpayee had come from Agra. During one of the discussions she asked Vajpayee whether he could help her in a case she faced from a land development agency for encroachment on government land. Vajpayee did not like it.

“Have you come to meet your brother or Prime Minister of India?”

he countered her in his characteristic style and went on to implore,

“If the former is true, please let’s discuss the festival and the family and keep off politics. Otherwise you are free to leave.”

He offered to get her Malpuas, his favourite sweet dish provided she did not broach the encroachment subject again.

We heard the anecdote from Ajay Mishra, one of Vajpayee’s nephews (bhanja) and younger sibling of Anoop Mishra, a former Madhya Pradesh Minister and now a Lok Sabha MP, in February 2003 during a fortuitous visit to Bateshwar, a village about 70 km from Agra.

Fortuitous because we (two photo journalists were accompanying me) were looking for a place to spend the night and referred to the village as it has a UP Tourism guest house on its outskirts. The dusty hamlet is famous for its 101 Shiva temples and an annual cattle fair it holds in the last quarter of the year. It also happens to be the birthplace of Vajpayee.

Vajpayee was born to a teacher-turned-inspector of schools Krishna Behari alias Gouri Shankar. He spent his childhood in a two-room tenement on top of a darra (mound in local parlance) with his three brothers and four sisters and even went to jail during Quit India Movement along with his elder brother Prem Behari. While Vajpayees lived in one part of the village Mishras occupied the other. The two Brahmin clans allowed inter-alliances and this is why Anoop Mishra also hails from Bateshwar.

During our less than 20-hour stay in Bateshwar, Ajay also narrated another incident of how Vajpayee turned down requests for renovation of his birthplace. The two-room tenement is in complete shambles with its foundation bricks having been uprooted and decaying. Wild thorny plants have grown all around the mound making it almost impossible for people to access the place.

“Lot of visitors inquire about your ghar (birthplace). Get it renovated and build an access to it,”

Ajay Mishra recounted having told Vajpayee during one of the latter’s visit to Bateshwar. The then PM simply smiled at him and questioned,

When prodded further, he simply quipped,

“He is a very good human being. He is a good bhai (brother), uncle and dada and baba (grandfather) and above Bharat Ratna,”

the Lok Sabha representative claims. He believes bestowing of Bharat Ratna on Vajpayee will add value to the highest civilian honour of the country.

During our stay at Bateshwar, we interacted with several dozen villagers. People only had good things to say about Vajpayee. We did not find a single critic. We came across a youth who did not get a Railway job because the then Prime Minister did not put in a word for him.

“When I asked him baba kuchh kar do he advised me to approach Bateshwar baba (an ascetic who meditated under a banyan tree in the past). His staff took very good care of me,”

the youth recalled his voice reflecting no bitterness from his meeting with Vajpayee.

Vajpayee graduated from Victoria, since rechristened Maharani Laxmi Bai, college in Gwalior. He joined Rashtriya Swayamsewak Sangh (RSS) at an early age and has been on record calling the RSS his ‘soul’.

In 1951, he enrolled into Bharatiya Jana Sangh (BJS) and worked with Shyama Prasad Mukherjee till 1954 when the latter died in a prison in Jammu & Kashmir protesting against maltreatment of non-Kashmiri Indians in the state.

In 1957, Vajpayee was first elected to the Lok Sabha from Balrampur, a parliamentary constituency in North Eastern Uttar Pradesh. Eleven years later he became president of Bharatiya Jana Sangh. In 1977, he merged the BJS into Janata Party on the call of Jaiprakash Narain. He became External Affairs Minister in Morarji Desai-led Janata Party Government. This was the period he evolved into a statesman.

Vajpayee (now 89+) first became Prime Minister in 1996 but his government lasted only for 13 days. In 1998 he once again occupied the top executive post of the country and held it till May 19, 2004. He served in the parliament for around five decades (ten times in the Lok Sabha and twice in the Rajya Sabha).

Vajpayee’s great oratory, his one-line quips and his pauses often silenced not just his detractors but even boisterous and noisy crowds in political rallies. In 1998, during an election rally in Badh (a town near Patna) when he got up to speak the crowd was shouting for Bihari babu (Shatrughan Sinha) and not allowing him to begin his speech.

and there was pin drop silence all around.

In 2009, Vajpayee suffered a stroke which ironically impaired his speech. Since then he has hardly been seen in public and meets only his close friends and relatives. From his siblings only one of his sisters Kamla Dixit is alive today.

Previous: The Great War’s Forgotten Soldiers
Next: A Great Breakdown?