Home > Environment > No Need to Grow Grains, Dig the Earth and Get ‘Cereals’ 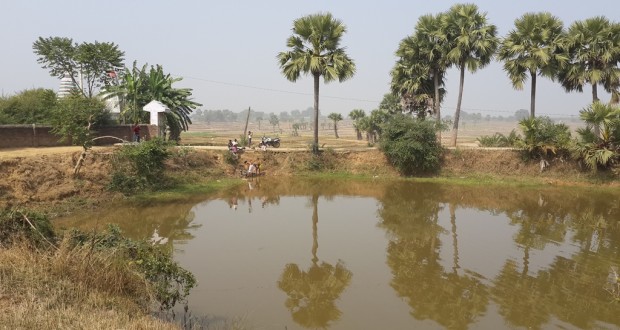 No Need to Grow Grains, Dig the Earth and Get ‘Cereals’

Rajmahal: As their poor parents go about tilling the land to grow crops, a gang of semi-clad young boys and girls gather around a pond and start digging cereals – albeit of a different kind.

Welcome to Kathghar, probably the only place on the face of earth where you can get ‘stone cereals’ – pebbles that resemble different varieties of rice, pulses and seeds.

But how do stone pebbles take shape of cereals?

As legend goes, almost two thousand years ago, Rajmahal, a dust bowl town in India’s eastern state of Jharkhad, was struck by famine and people were dying of starvation.

It was then that a saint requested the king to open the door to his grainery for the people. But the king refused to do so.

He told the saint that his grainery was filled with stones and there were no cereals there. Furious over this blatant lie, the saint said so be it. Locals say, as a result of his curse, everything that the king had in the grainery turned into stone.

One of the biggest exporters of silica sand and china clay in India, Rajmahal, has lately become a tourist attraction with people from different parts of the country visiting the place.

“While tourists don’t hesitate from taking away samples of the stone cereals, locals however, do not prefer storing them in their house as they fear it might bring misfortune to them,”

Explaining how deceptive the pebbles could be, Arnab Saha, who is married to a girl from Rajmahal, said,

“When I went to my in-laws’ house for the first time after marriage, my sister in-law offered me some Prasad that had rice in it. The moment I popped it in, I realised that it was nothing but pebbles.”

But science has a different story to tell.

“The Geological Survey of India had done a study on these stone cereals in the late 80s and they came to the conclusion that these are basically undigested silica particles that were trapped inside the basalt rocks found in abundance in that area.”

Over a period of time, the rocks weathered and silica particles of different shapes, sizes and colours came out in the open. It is very likely that in the ancient times there was a stream or a river nearby that deposited the ‘stone cereals’ at Kathghar.

“My first impression is that these are silica, spindle-shaped objects that congealed during an eruptive phase of the volcanic activity that occurred around Rajmahal about 100 million years ago.

The shape is related to the way in which silica from volcanoes solidify in air. If my hunch is correct, take one of the spindles and see if you can scratch glass – any piece of glass.”

As per his suggestion, when a mirror was scratched with a rice-shaped pebble, it made a prominent mark on the face of it.

However, Sahni, having five decades of experience in the field, does not like to rush things.

“I am waiting for the sample to reach my lab. Once I examine them properly, I would be able to say what actually the pebbles are and how they took shape and colour of cereals,”

Previous: Mamata’s bid at “controlled democracy” !
Next: Not knowing Tendulkar is not akin to blasphemy