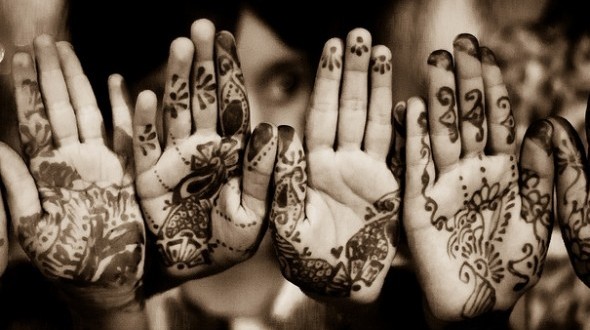 Indian Muslim women henna their hands for important festivals, such as Eid. Izzah Zainab under a Creative Commons Licence

Just as unexpectedly, educated middle-class Muslim women preferred not to rock the boat. They opted not to ‘tamper too much’ with sharia law, even when it came to getting 13-year-old girls married off before they finish school.

On the other hand, the illiterate women wanted to see their daughters educated, and opted for 21 as a good age to marry.

Islamic scholars who painstakingly drafted the new law point out that the modifications to the new bill are based on the Qur’an. But although Qur’anic norms are far more progressive with regard to women than the laws of any other religion, misogynistic clerics frequently misinterpret it, and sharia law, so as to impose patriarchal norms on Muslim women. That Muslim women are voting for change is definitely something to cheer about.

While the news is music to the ears of Indian feminists and most Muslim women, the Indian press has rarely focused on the illegal polygamy practised, with no repercussions, by senior politicians.

In most states, rich men acquire women as easily as they do cars or houses, with total impunity.

In Kerala state, which is always unique, the media regularly features politicians’ sex scandals, with all the salacious details thrown in.

But in most other places there is scarcely a raised eyebrow. The worst sex scandals die a natural death after the most lurid details are fed to an avid public.Mostly the men get away with it, because rapes and trafficking are difficult to prove and there is insufficient evidence, or witnesses are bought off by the perpetrators.

Several years ago, an outraged senior civil servant said to me,

‘Gegong Apang, Chief Minister of Arunachal Pradesh, has, according to Delhi rumours, eight wives. Why is he allowed to get away with it?’

I googled the politician and found an old article that quoted the man as having said:

‘The prime minister has permitted me to marry a second time. Polygamy is accepted here. My father had six wives.’

His nonchalant response to angry questions from political rivals about his second polygamous marriage infuriated them at the time. I telephoned  Domoya, the only  young woman from Arunachal state I could easily reach, to ascertain her views.

‘Women are livid when their husbands remarry,’

‘But what can they do when society accepts it?’

The article on the former Chief Minister says:

‘Neither wife will speak about each other, but if a local report is to be believed, his first wife beat up the second.’

This was all a very long time ago. But it’s the norm rather than the exception in many places.

In Tamil Nadu state, the existence of politicians’ second or third wives is common knowledge.

In fact, women live in dread of their husbands acquiring the ‘Chinna veedu’ (literally translated as ‘little house’).

A second live-in partner spells trouble for  the first wife and her kids. Will he provide income support or  abandon them? A second wife is definitely bad news for most Tamil women.But the richer the man, the easier it is for him to acquire several partners.

These women are not accorded the status of wives, by law. Though our very hypocritical society has differing standards in the way sexual practices are accepted or condemned, there are often unseemly fights over property and inheritance when the man in question dies.

All of these factors have, rather perversely, caused senior lawyers and advocates to question the wisdom of outlawing Muslim polygamy.

Even the fourth Muslim wife, they averred, is possibly better off legally than a second live-in partner of a Hindu, Christian, Jain or Parsi man.

The idea of several wives being acceptable to any woman seems alien; yet, as my daughter pointed out, some Mormon women find solace in the idea of ‘Sister wives’.

And so the battle for women’s rights continues. For better, for worse.