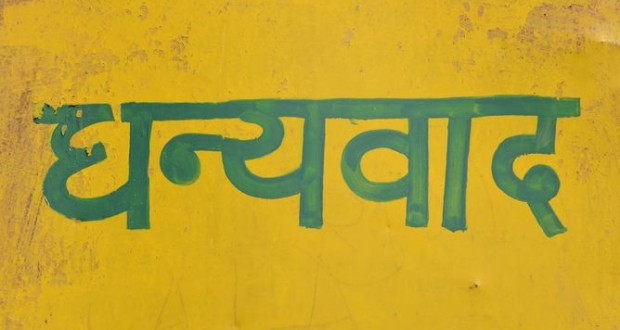 Not only has new Indian prime minister Narendra Modi replaced English with Hindi when talking to audiences in non-Hindi parts of India, he’s also addressing other Asian leaders in Hindi |Photo:Shutterstock

Narendra Modi just returned from his first foreign trip as India’s prime minister. The two-day Bhutan visit focused on mutual trade and development, but one of the biggest stories in India was Modi’s use of language.

In doing so, Modi reminded us that Hindi is one of the world’s most widely spoken languages, understood by millions outside India as a second language, if not a first. He also distinguished himself from all of India’s leaders since independence, who have almost always used English on the international stage.

Modi spoke in Hindi to the leaders of Afghanistan, Pakistan, Nepal, Bangladesh, Bhutan and the Tibetan government-in-exile. They all understood him. Just by chatting, Modi demonstrated Hindi’s multinational status.

This has Indians talking about Hindi: some with excitement, others with anxiety. As Modi was concluding his Bhutan trip, reports circulated that the Home Minister’s Office had instructed government offices to favour Hindi in social media communication.

This prompted charges of Hindi chauvinism from India’s non-Hindi regions, and jokes about Hindi tweeters buying dictionaries to decode the government’s formal Hindi.

India’s national laws have been written in both Hindi and English for six decades.

Official government communication between the central government and non-Hindi states is generally conducted in English, which is spoken by around 15% of India’s population.

Critics fear government preference for Hindi in social media would run counter to that convention, and thereby weaken the status of non-Hindi Indian languages.

Hindi sparks controversy in South India, especially in Tamil Nadu, which has a history of anti-Hindi protest. Tamil is spoken by 60 million people within India and millions more outside India.

A 2006 state court order in Tamil Nadu enforced Tamil-only instruction through to year ten in state government schools. A local group just filed a challenge to this order.

Citing Hindi’s use in much of India and the world, they demand Hindi instruction be allowed. Pro-Hindi sentiment in Tamil Nadu is not widespread, but the anti-Hindi riots of the 20th century seem increasingly distant.

Much has been made of Modi’s rise from tea seller to prime minister. His embrace of Hindi fits his humble-origin narrative and provides a contrast with his political opponents and with six decades of English-fluent predecessors.

To her credit, current Congress Party president Sonia Gandhi learned Hindi as an adult after her Italian upbringing, but she has nevertheless been mocked for reading Hindi speeches off notes in Roman script.

Sonia’s son Rahul Gandhi, Modi’s opponent in the recent election, is awkward speaking publicly in any language. He could never be a Hindi champion. And despite occasional flashes of Urdu and Hindi wit, the softly spoken English addresses of former prime minister Manmohan Singh cemented his characterisation as a silent and ineffective leader.

Modi is hardly silent. From the inflammatory speeches of his 2002 Gujarat chief minister campaign to his record-breaking number of campaign rallies, Modi has demonstrated skill at captivating massive audiences.

Modi does this in Hindi: whether in the Hindi heartland of North India, or in the states of South India where languages such as Tamil, Telugu, Malayalam and Kannada — all unrelated to Hindi — are spoken by the majority.

Hindi speakers often lament the lack of respect accorded their language, even by those who consider it their mother tongue. India’s youth want to learn English, because they have seen English as a path to prosperity and status.

Modi is fluent in his Gujarati mother tongue and in the related Hindi language. He also knows English. But with his weak English occasionally mocked, his decision to favour Hindi may have been necessary. Just as he transformed his tea-seller background into a strength, Modi has embraced Hindi as a point of pride.

During Modi’s first address to the Indian parliament, volumes of social media comments elaborated on this feeling of pride. Although many national leaders have spoken languages other than English, many Hindi speakers suggested they had never seen their language accorded such official respect.

Modi’s journey to the prime minister’s office has made many Indians rethink Hindi’s position in the world, and the connections between Hindi and success.

Will Modi’s conversations with India’s neighbours encourage Hindi as India’s language of diplomacy?

Will Modi address the United States Congress in Hindi, if calls for him to address a joint session are successful?

And finally, will individuals from the south and northeast states be increasingly mocked for bad Hindi, rather than bad English? That is, has Hindi become India’s new English?

Previous: QIP queue gets longer
Next: Rail Budget 2014 : On track for investors?