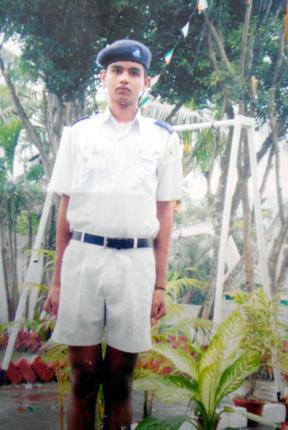 Aman Sharma, who was taken hostage on the ship ‘Albedo’ by Somalian pirates in 2010 and subjected to inhumane torture tactics since, has been freed after more than three years in captivity.

However, the details of how the 11 crew members of the Malaysian-registered ship were released could not be known at the time of going to the press.

Aman’s lawyer Jas Uppal, who takes up the cases of condemned Indians abroad, informed PB7 by phone from London that the 23-year-old has been rescued by the UN on Saturday night.

“They have been taken to Kenya before being repatriated,”

she added, claiming to have got the information from a highly-placed UN official.

Though the government of India has not given an official confirmation on his release, Aman’s father Keval Krishna Sharma confirmed the development in a telephonic interview with PB7.

“Yes, my son has been released by the pirates late on Saturday night. Aman had called me yesterday in the afternoon from Nairobi and told us that he is hoping to return home in three-four days. We are so happy to have our life back. I have no words to explain how we are feeling now. Finally, the endless wait is over and my son is coming home,”

Sharma said in a chocking voice.

He, however, could not reason why and how the pirates could possibly free all the hostages without taking any ransom.

“Aman was calling from someone else’s mobile, so I could not talk to him in detail about it,”

Uppal, a UK-based lawyer who launched international campaign to secure the release of Sarabjit Singh in Paksitan, said she was given a written permission from Aman’s parents to pursue his case.

“I reported the case to the UN, Interpol and many others urging action. I received a number of calls confirming Aman was being tortured and his parents were made to hear him over the telephone. I also contacted a man who was liaising with hostages,”

said Uppal, who is also a volunteer at Bharaat Welfare Trust’ (BWT), Leicester.

The trust has offered to contribute towards Aman’s medical support and help him and his family to rehabilitate back into the community.Though Aman and 10 others have been released, the pirates still hold around 40 people hostage.

Seven of the ship’s crew members were released two years ago when a ransom was paid, while six, including an Indian, have died in captivity. The crew included members from Pakistan, Bangladesh, Sri Lanka, India and Iran.

Previous: Why UP is a fertile ground for crime against women?
Next: Dharhara’s eco-feminism spreads its wings across Bihar