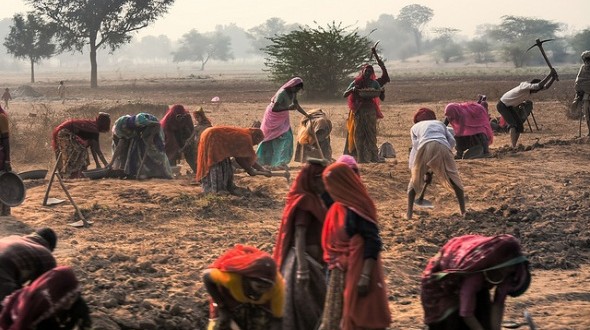 Millions of village women are forced to defecate or pee in the open fields close to their houses. Rongzoni under a Creative Commons Licence

No candle-lit vigils for raped and murdered girls

Two young girls, 14 and 16-year old cousins, were abducted, raped, tortured and hanged from a tree last week in Badaun, in the northern Indian state of Uttar Pradesh.  It’s a completely sickening scenario. No, far worse than sickening actually. But it’s hard to churn out words or emotion, day after day, week after week, as each new rape hits the news with almost monotonous regularity.

It was a normal day for the teenagers. Before going to bed on that fateful night, they stepped out to go to the loo.

Except that the average Indian villager does not have a loo to go to.Millions of village women are forced to defecate or pee in the open fields close to their houses. They normally choose to do this under cover of darkness, at daybreak and after sunset.

But the routine turned into a nightmare as a group of men grabbed the girls and took them away. An uncle of one of the girls saw them being dragged by the hair and protested. He was threatened with a gun. One girl’s father ran to the police station begging for help. The policeman callously told him to go away, his daughter would return in the morning.

When the desperate father fell at his feet begging the cop to do something, the cop slapped him. This is the sort of scenario that is commonplace for poor and dalit families.

It’s been pointed out that these girls are not dalit, though most Indian newspapers reported otherwise. They were, nevertheless, extremely poor, powerless and from a lower caste. The perpetrators, apparently, routinely molested and raped lower caste women and this particularly brazen rape and murder, was to teach the poor and powerless a lesson, to show them their place in the feudal, caste hierarchy.

Recently, dalit and lower caste people had protested against the behaviour of the dominant caste Yadav men who until now have ruled the roost in the surrounding villages.

The local policeman who slapped the victim’s father belonged to the same caste as the perpetrators. And two policemen reportedly, not merely abetted in the crime, but participated in the assault too.

The girls’ bodies bore marks of excessive brutality. The usual scratches, bite marks, bruises, but also  a pattern of  blood clotting which indicated beating and torture. And the post mortem revealed they were hanged while still alive. Commentators have pointed out that the levels of violence and viciousness in the new rape culture is frightening, calling for immediate and effective action. Much of it comes from the porn which circulates freely on mobile phones. It’s not merely rape now. And  the fact that I write ‘merely rape’ illustrates how terrifying  the situation is.  Almost as though one has to be grateful one is ‘merely raped’.

It is with a heavy heart that I note, that the outpouring of grief and outrage which rocked India in December 2012 for the Nirbhaya Delhi rape victim, is noticeably absent in cities across India, for the Badaun cousins. They are not middle class, dominant caste, city women. These were two lower caste, village girls. Not ‘people like us’.

The UN and the US have commented on our horrifying new status as an ‘unsafe destination for women’.

Tourism is being affected, our economic watchdogs tell us, because our ‘rape’ cases are being showcased across the world.Perhaps the politicians and powerful people who want India to ‘shine’ will finally do something drastic to cut crime against women.

I don’t see much concern for the women victims involved, apart from public posturing and political speeches about women’s empowerment. Political parties across the board use each rape to score points against their rival parties. They should now work together to ensure that the perpetrators of rape and murder are stringently punished along with the policemen involved. Our rape laws, even our new ones, remain toothless if the supposed guardians of the law jump on the bandwagon, not merely in dereliction of duty but to participate in caste-based crimes.

As a country we are reaching boiling point. Will this force change?

Previous: What is the FIFA World Cup worth?
Next: Why UP is a fertile ground for crime against women?