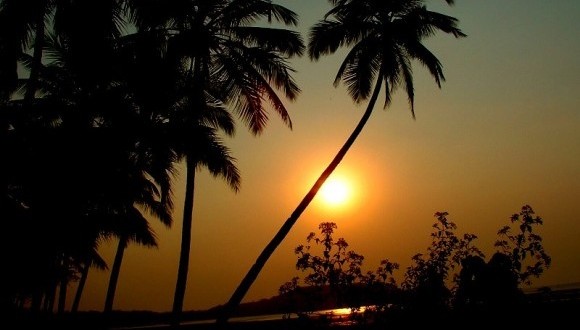 Goa was ‘discovered’ by hippies and backpackers in the 1960s and 1970s. thegypsynomads.com under a Creative Commons Licence

Goa, about 40 years ago, was just Goa. Home to a laid-back people who spread all over the world because the Portuguese colonial masters did little to educate or create job opportunities for the local population.

To the average Indian, indeed to most coastal people, except for Caucasians, beaches were places where one sometimes swam – or walked, dressed casually perhaps, but fully clothed – to enjoy the sea breezes. Old people, women and children gingerly tested the waters dipping a cautious foot in first, then perhaps wading in knee deep. People fished a lot. And wonderful seafood cuisines evolved..

Local people did not lounge on the beach for leisure. They scurried indoors to avoid the sun. This is true of most indigenous coastal populations around the world. Caucasians, coming from colder climes, raised their faces for the sun’s benediction. Local Asians or Africans thought this was crazy and left the sun-worship to, as Kipling put it, ‘mad dogs and Englishmen (who) go out in the noon-day sun.’

Goa was ‘discovered’ and became a ‘happening’ hot-spot with the invasion of hippies and backpackers in the 1960s and 1970s.

There are beaches where Indians are not welcome and locals dare not cross those boundaries. White women and drugs from Russia and Eastern Europe are trafficked at super high prices for those who can afford them.

Trafficking and drugs are part of a frightening world far away from my life. But an article in a local daily left me disturbed and sleepless.

A convicted British paedophile is resisting extradition to India to face charges of being part of the paedophile ring that sexually abused and tortured children in a Goa orphanage between 1986 and 1992.

Kerala, Goa, and other tourist destinations are hot-spots for western paedophiles, offenders often escaping back to their own countries with impunity.

The Indian government has filed an appeal in Britain for the extradition of Raymond Varley to face charges of sexual offences against children in Goa.

His lawyers claim he will commit suicide if he is returned to India and that he cannot stand trial as he suffers from memory loss and dementia.

Indian and British activists are horrified that Varley, who has previous convictions for abusing children, may avoid trial after he managed to get a neuro-psychologist, chosen by himself, to testify that he suffers from dementia.

‘Whether Raymond Varley is faking dementia or not, I am really shocked and dismayed that the Crown Prosecution Service failed to obtain an independent psychiatric assessment.’

‘If the current application for appeal on the extradition is refused, he will be a free man and will no longer be subject to his current restrictive bail conditions which prevent him from going near schools and children’s play areas.’

Child rights organizations like End Child Prostitution, Child Pornography and Trafficking (ECPAT), Save the Children and others, band together to get justice for British and Indian children? I urge them to do so.

And I appeal to readers to write letters to the PM and relevant organizations. If we call ourselves civilized, we must protect our children.
Britain drug trafficking Goa India Kerala Paedophiles pornography Raymond Varley Rights sexual offences 2014-05-31
Team PB7