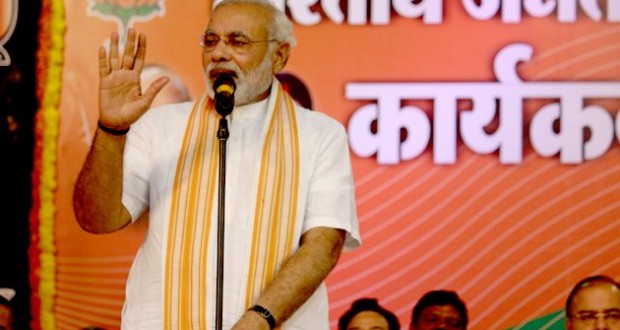 Narendra Damodardas Modi is set to become India’s 14th Prime Minister on May 26th. Modi’s extraordinary journey, one that has been highly inspiring and motivating for the youth will become part of the Gujarati folklore; achieving success through sheer grit, determination, dedication and unflinching focus while telling the story of how a boy selling tea on trains became the Prime Minister of the largest democracy in the world!

Modi’s has been a rags-to-power story.Use of the clichéd rags-to-riches phrase was avoided as the rich might get offended for putting a man worth just Rs 1.5 crore in their league.

Besides, the reference to money would have belittled the success of a man of such humble beginnings and who almost single-handedly took on one of the strongest, elitist dynasties in the world and beat them fair and square.

The BJP’s performance has been beyond all pollsters’ imagination. In fact, the win ensuring full majority to the party is what seemed like an unrealisable dream to the party’s seniors. However, that dream has indeed come true. The prodigious results have muzzled Modi’s detractors and quelled any semblance of resistance, hidden ambitions and envy within the party.

Under Modi’s leadership, the NDA won over 60% of the Lok Sabha seats.

A year ago, no one could have even imagined that the controversial Gujarat Chief Minister, a pariah for secularists and human rights activists, would turn around the political fortunes of the BJP to this extent.Godhra riots had become an albatross around his neck.

There are few instances in history when an individual has been systematically targeted so severely and for so long over an incident: violence sparked by 59 people, men, women and children, being roasted alive in a train bogey. No doubt, Modi has brought the BJP unprecedented success at the hustings.

The party polled the highest number of votes in 21 states and UTs, including Jammu & Kashmir, and made a clean sweep in Rajasthan, Gujarat, Uttarakhand, Himachal Pradesh, Delhi and Goa.

The Modi surge completely decimated parties like the National Conference(NC) and Bahujan Samaj Party(BSP) which failed to even open their accounts. The scores in U.P. and Bihar have been a befitting reply to Modi’s bete noires Mulayam Singh Yadav and Nitish Kumar, respectively.

The tally in Maharashtra was also a bit unexpected. No one ever thought that the NCP and Congress would be beaten so badly in the State. The UP results which have been over-the-top just go to show why Amit Shah is known to be the right hand of Modi. 71 out of 80 seats plus 2 to ally Apna Dal; no psephologist, no opinion/exit poll gave this tally.

Amit Shah also turned out to be communicator extraordinaire after Modi who proved to be the best hand in the party at it. Shah cogently demolished all criticism, exposed the untruths while scoring over rivals on TV channels and helped build up the tempo in Modi’s favour.

What role Shah gets to play in Modi regime will be interesting to see.

Interestingly, Narendra Modi is being seen in a new avatar as unseen and unheard  facets of his persona come to fore in his speech and actions every other day since the massive mandate he garnered.

The man accused of doing “gusse ki rajniti” (politics of anger) has now shown his unseen mellowed side to his admirers and critics.

His act of genuflecting at the Parliament entrance and the exhibit of emotions twice in his address in the Central Hall was shocking to many who till then just saw in him a ruthless politician who was known for steamrolling his opponents and critics.

In a show of brilliant statesmanship, he has invited heads of all parties, chief ministers and even the heads of the SAARC nations to his swearing-in ceremony including Pakistan’s Prime Minister Nawaz Sharif who has consented to his request.

At home Mamata Banerjee didn’t seem very inclined to confirm attendance. Now, if Sharif comes from Pakistan and she doesn’t then she ends up losing ground. Modi has been saying he needs support from everyone for the exalted goal of nation-building and has also shown keenness to build friendly and good relations with neighbouring nations in contrast to the expectations of an overbearing role that many feared.

For now, seems like Modi is proving to be all that he has been promising; presenting a big welcome shift from the days of inaction under UPA 2. Even before his oath-taking ceremony, Narendra Modi, focused on fulfilling the promises he made in his election rallies, has initiated steps in the forward direction, knowing well that expectations from him are too high and he has not a second to waste.

He has held meetings with senior officials and has given them directions to make presentations on the roadmap and agenda ahead.

The PM-designate has reportedly also told senior officials to chalk out a plan for repatriation of displaced Kashmiri Brahmins, an utterly neglected lot till now who have been pleading before successive governments but no concrete action was taken ever.

Another big decision being reported is on conferring the highest civilian award, the Bharat Ratna, to Netaji Subhas Chandra Bose and Mahamana Pt. Madan Mohan Malviya.

The very spirit behind these two decisions is undoing the wrongs done over the time. Actions that forebode well for his five-year term, the nation and its people.

Previous: Time To Narrow The Gender Chasm in National Income Accounting
Next: Will the current political transition mark the end of “Nehruvian legacy”?