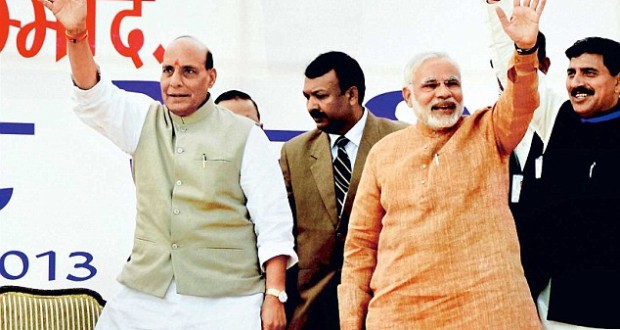 Now in power, will BJP find a way to push their agenda in the Rajya Sabha as well? | Photo: PTI

New Delhi, May 17: Having achieved its 272+ mission in the 543-elected member Lok Sabha, the directly elected House of Indian Parliament, Bharatiya Janata Party (BJP) is now embarking on a two-pronged plan to rustle up numbers in the Rajya Sabha, the Upper House, where the party-led NDA has only 64 members, 57 short of a simple majority.

An ordinary bill requires approval of 121 members (simple majority since the RS presently has 240 members) while for constitutional amendment a bill needs to be passed by two-third majority of the House.

Firstly, the party is eyeing to enlist support of J Jayalalitha-led All India Anna Dravid Munnetra Kazgham (AIADMK), Biju Janata Dal (BJD), Nationalist Congress Party (NCP), Bahujan Samaj Party (BSP), Trinamool Congress (TC), other fringe groups and independents which could help it to shore up its numbers. While the AIADMK has 10 members in the Rajya Sabha, the BJD and the NCP contribute 6 members each to the Upper House. The BSP and the TC have 14 and 12 members respectively.

Even if the NDA succeeds in enrolling the AIADMK, BJD, NCP and the INLD, it will still be short of the simple majority by 31.

Apart from having representation from fringe players like Indian National Lok Dal (2 members) and 10 other political groups (each having one member), the Rajya Sabha also has a substantial number of nominated members (10) and independents and others (9). Samajwadi Party (SP) has seven members.

In 1989, the then Rajiv Gandhi-led Congress Government faced a major embarrassment in the Rajya Sabha when it failed to muster support for a constitutional amendment to confer constitutional status on Panchayati Raj Institutions (PRIs). The amendment could only be passed in 1991 when the Congress returned to power under P V Narasimha Rao.

BJP Prime Ministerial candidate Narendra Modi’s assertion on Friday after being elected from Vadodara and Varanasi seats that his party would like to take all political parties along should be seen in the context of Rajya Sabha’s make up.

Besides wooing regional parties and independents, the saffron party is also working on a long term plan to achieve majority in the Upper House by 2016 when one third of the RS members will be retiring.

The group would like to put maximum states in its kitty before the 2016 RS polls.

Its first target is to capture power in Bihar and Uttarakhand. While Nitish Kumar-led Janata Dal (United) Government has 115 seats in the Bihar Assembly, six short of a majority, in Uttarakhand the Congress’ minority government is propped up by seven MLAs of Progressive Democratic Front (PDF), a euphuism for a group comprising BSP, Uttarakhand Kranti Dal (UKD) and independent legislators. Kumar had survived after withdrawal of support by the BJP with support from Congress, Communist Party of India and independents.

Five seats of Bihar Assembly went to polls along with the Lok Sabha elections. The JD (U) and the BJP have won one of these seats while three others have been pocketed by Lalu Prasad’s Rashtriya Janata Dal (RJD).

In case the BJP succeeds in replacing Nitish Kumar’s minority Government in 2015 when the state is slated to elect a new assembly, it will stand a good chance of winning three RS seats. Jharkhand and Jammu & Kashmir will also elect new state legislatures in the early part of 2015.

But for now, the BJP’s focus is on Haryana, Maharashtra and Jharkhand where the assembly elections are scheduled to take place later this year. Delhi is also likely to have state polls later this year.

Maharashtra, Haryana, Jharkhand, Bihar together will contribute 10 members to the Upper House of the Parliament in 2016. The three RS seats from National Capital Territory of Delhi will be vacant only in January 2018.

BJP has swept Jharkhand winning 12 out of the 14 parliamentary constituencies. In Haryana, the party has won 7 out of the 10 seats. In Maharashtra and Bihar, the saffron party has won 41 out of 48 and 27 out of 40 seats respectively along with its partners Shiv Sena and Lok Janshakti Party (LJP). In Delhi, BJP has won all 7 Lok Sabha seats.

Though 23 seats of the Rajya Sabha are expected to be refilled by end of 2015, the BJP does not stand much of a chance there. Majority of these seats are from states like Uttar Pradesh and Karnataka where the BJP does not have good numbers in the assembly.