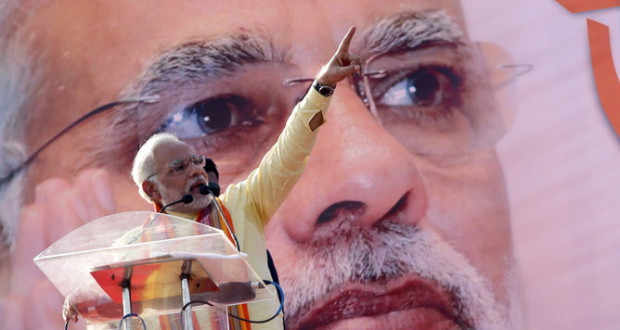 The world’s largest democracy exercised its right to participate in the democratic process in April and May 2014, with high voter turnouts in 122 constituencies. It is judgment day for India’s big and small political parties, as the Election Commission begins the process of counting votes on May 16, 2014 at  8 am. We’ll bring you the latest successes, defeats and trends as they unravel on the national stage on our live blog coverage of the event. #Results2014

Post an address at Vadodara at 4 PM this evening, Modi makes yet another address at Ahmedabad!

Those who criticised me didn’t know Modi is such a magician who also made them speak on important agendas.

Well, for now it seems like post election results, the new Indian PM has already spoken more words than our outgoing PM did in his last 10 years of governance.

The results clearly spell out the difference between activism and politics. Hugely successful activists such as Arvind Kejriwal and Medha Patkar bite the dust. Guess Anna Hazare was right after all!

Modi wins by over 5 lakh votes! An absolute Majority!

Rahul Gandhi wins from Amethi with 170,00 votes. Some cheer INC?

Seems like love for “the family” is hard to get by!

On the other hand, Milind Deora loses from Mumbai South. Introspection much!

Thank all my supporters. Congrats to the winner & wishes to Modiji. Hope the nation moves forward. Cong will introspect & emerge stronger

Nandan Nilekani and V. Balakrishnan, both lost in Bangalore.

BJP’s performance in Uttar Pradesh has been outstanding! Registering a winning position in 71 out of 80 constituencies.

Yet another twitter trend launched ! Modi’s Victory Wall  is now up for your wishes!

I look forward to receiving your good wishes on the specially created Victory Wall http://t.co/bVzfqRKA5m#CongratsNaMo 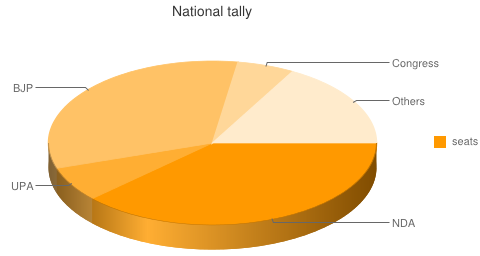 Rahul Gandhi owns up and takes responsibility for Congress’ defeat.

“Congress has done pretty badly, and as vice president I hold myself responsible for the results.”

Sonia congratulates the new government before rushing out. The lesser spoken the better for Congress!
4:30 PM

Congrats @narendramodi led BJP on citizen’s verdict in their favor. Hope his team stands up to the needs and expectations of Bharat Mata.

Rahul Gandhi is leading in Amethi, while Smriti Irani trails.

Far from comfort but the Congress party is down to just 48 seats.

On performance of AAP, Girish Soni, called it a “learning experience” for the party.

“Winning was not our objective. But the people have supported us,”

Oh and by the way, the number of slaps the AAP leader (Mr Arvind Kejriwal) got is more than the number of seats they won! We hope AAP has learnt its lessons at least now that governance cannot be done on the road! 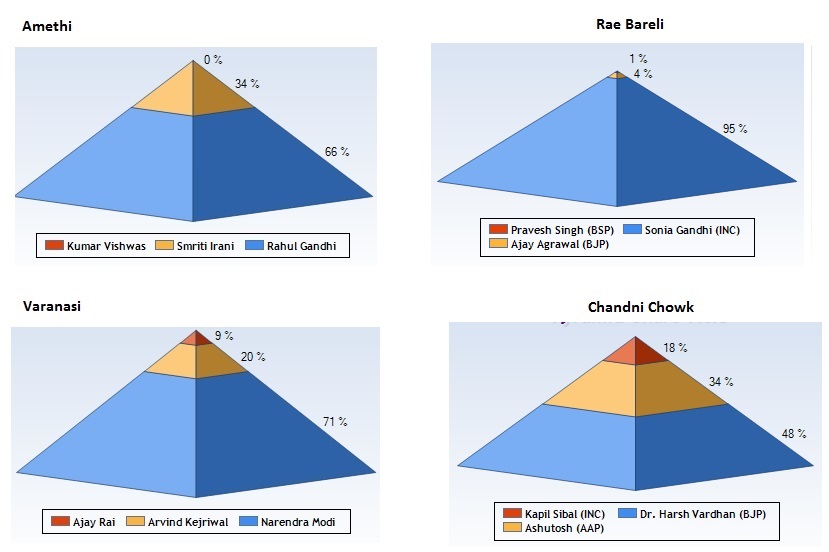 Jayalalitha: I’m happy we’ve won without a coalition. I hope the government at the centre is co-operative.

A view at Times Square, New York. Indians chanting for Narendra Modi on the streets as they await results of the India’s most historic national elections.

Sought blessings from my Mother pic.twitter.com/OegXhartLx

A historic win and Modi seeks blessings of his mother Heeraben 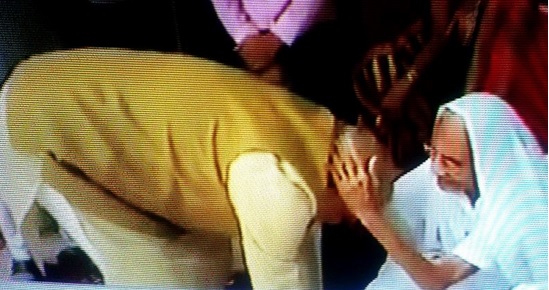 Seeking blessings of his mother

Shazia Ilmi of the AAP loses in Ghaziabad.

Rajasthan MP Abhishek Singhvi in an interview to CNN IBN

I still anticipate changes in the east and the south and in the north east. But I agree with you that this is overall picture, there doesn’t seem to be any part of India [that has swung to the INC] except Kerala to an extent where there is an exception

Adds – congress will sit in opposition!

BJP leads in Maharashtra with 22 seats, Nationalist Congress Party has 3 seats so far, INC has 1.

There seems to be a consensus within the INC that Rahul Gandhi cannot be blamed for the loss.

In Chandni Chowk (Delhi), Harsh Vardhan of BJP leads over Ashutosh of AAP by 59174 votes; Kapil Sibal of INC trails.

10.54 am
Congress loses Assam, Chief Minister Tarun Gogoi to resign to accept responsibility for the defeat. 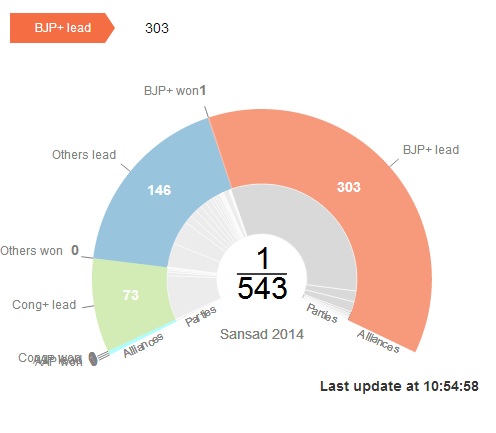 Gujarat: 26 out of 26 for BJP. And Delhi 7/7 too. First time ever. History being created by Shri Narendra Modi #Results2014#ElectionResults

BJP crosses the 250 mark ! Does not need allies now!

Status of 393 seats out now. If initial trends are to be believed, the Congress performance this year has been its worst ever. The BJP, on the other hand, is already leading in 213 constituencies.

BJP Leading in over 300 seats

Omar Abdullah tweets about the terrible scenario in his constituency, hopes for the trends to be proven wrong.

Abhishek Manu Singhvi admits that the picture looks very bleak for the Congress, agrees to work as a constructive member of Opposition. 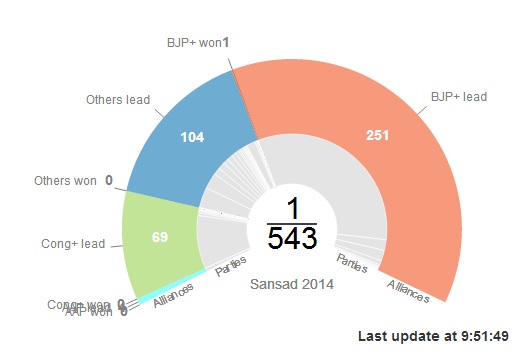 Congress leads in Kerala, AAP in Punjab. The rest of the nation seems to be swept by a BJP wave. Initial trends show a clear BJP majority in the 2014 General Elections.

CNN iBN / Times NOw announces that Narendra Modi will be next Prime Minister.

BJP’s PM candidate Narendra Modi is leading in Vadodara by over 70,000 votes, after first few rounds of counting

The BJP has a clear lead at this point, with 34 seats. The INC, on the other hand, has managed only 11 seats so far. The AAP is leading in 3 constituencies. — It is too early to predict anything. These are just leads, as in — these parties are leading the vote count. They haven’t conclusively won yet. Let’s not made any assumptions till 10 am.

Narendra Modi is leading in Varanasi

Of the 543 constituencies, the status of 15 is known. The Bharatiya Janata Party is leading the vote count in 10 constituencies, while the Indian National Congress is leading in 2. The Naga People’s Front, the National People’s Party, and  the Shiromani Akali Dal have 1 seat each.

Liveblogged with contributions from Vinaya Kurtkoti