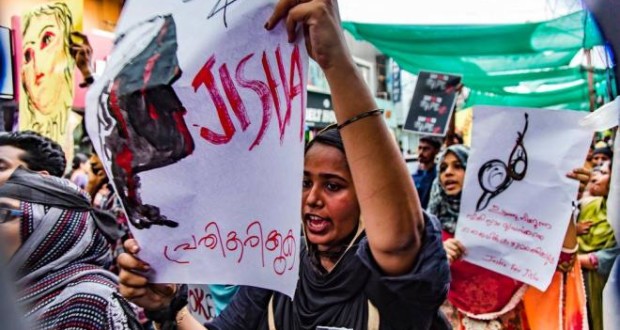 Kerala has long been held up as an example of a model state. India’s most educated piece of paradise. But people who live there, in general, and women who live there in particular, know only too well, that the hype is merely that – hot air.

The fact that this is a state with the highest literacy levels has been blown out of all proportion. It is used to cover a multitude of sins. Misogyny prevails in most strata of Kerala’s society. How else, in a state where all women, even the poorest, go to school, do we have a scenario where a girl cannot walk home alone, after sunset, without men leering at her, passing lewd filthy remarks or pinching, groping and molesting her?

The mystery of why Jisha was so brutally and viciously raped and murdered has not yet come to light. But her body was tortured and mutilated before being strangled and smothered to death. She was covered in bite marks and slashed with a knife.

How was it that no one heard her screams? Why did no one go to her aid? More unanswered questions. Being a Dalit places you in a precarious position in our society. People blame the victim. People from dominant castes close ranks, cover up crimes to protect predators who are ‘PLU’, people like us. The police protect PLU perpetrators, the media wrote singularly unsympathetic reports about her mother. Neither Jisha nor her family merited the support shown to the earlier 2012 Delhi victim who made world headlines.

Kerala youth however, in colleges around the state, protested for justice for Jisha. Leading the charge were women media persons, activists and women’s wings of various political parties. They raised issues regarding the lack of action around safety of women and the indifference of the police in general as well as the Kerala public in particular, when roadside attacks take place. ‘Jisha was murdered in her own house,’ a student pointed out. ‘What hope [is there] for our society if we can’t even be safe in our own homes?’

Kerala has the distinction of endless sex scandals involving politicians, the rich and the powerful. Girls have been abducted, gangraped, threatened by their own boyfriends who blackmailed and coerced them into having forcible sex with myriad men. There’s no dearth of a regular supply of such stories. It’s a pretty ugly scenario.

Unless Jisha’s death provokes a radical and deep search for the soul of Kerala, to uncover and cure the malaise which threatens to engulf Keral society, the state will rapidly go into a downward spiral. A society which treats its women with such utter contempt cannot go anywhere else. Reams have been written about the matrilineal society. But the reality is sordid and revolting.

I realize that I sound hopeless, harsh and judgemental.

When you visit Kerala, there is such a grasp of politics, poetry and prose, literature, exceptional films. It’s always a pleasure to listen to peoples conversations in a bus or train. So we expect more from an informed society.

The stark contrast lies between the wonderful level of awareness on so many important fronts and the crude, brutish reality for women. The overpowering crass consumerism and quest for wealth and its trappings, contributes to the curious case of conflicting cultures. It prompts me to ask, ‘Which is the real Kerala?’

And that’s a question only the people who live, eat and think there can answer.

Previous: Asia’s Troubled Water
Next: Bangalored: Death of a Dream